Known for their loyalty to their family!

Click through all of our Staffordshire Bull Terrier images in the gallery. 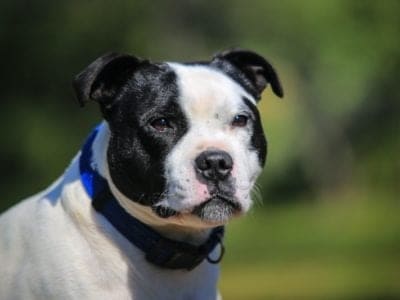 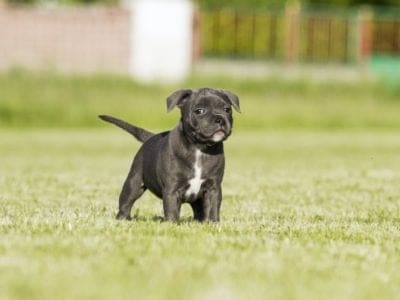 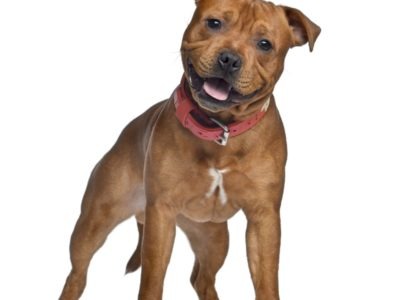 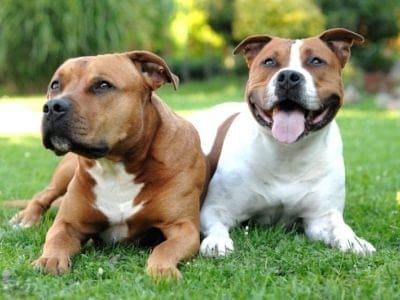 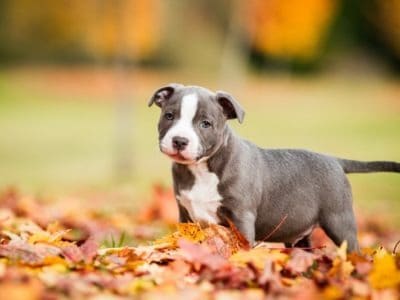 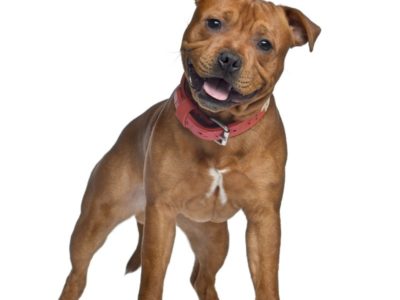 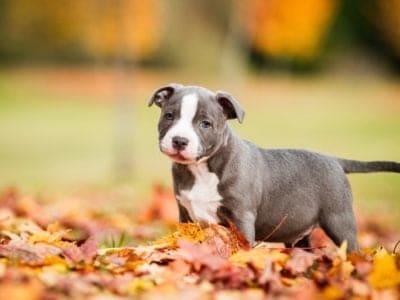 View all of the Staffordshire Bull Terrier images!

Descendants of ferocious, pit bull fighting stock, staffies have muscular bodies and gobs of energy. But over centuries, aggressiveness has been bred out of them. These days, most SBTs are goofy bundles of energetic joy who are fantastic with kids.

Widely regarded as an excellent dog for active families, a staffy may be the perfect addition to your home. But before welcoming one into the fold, it’s important to familiarize yourself with a few critical facts to ensure it’s a good fit.

Staffordshire bull terriers are descendants of the now-extinct Old English bulldog and Old English terrier. Some kennel clubs call the two “lost breeds” old-fashioned bulldogs and old-fashioned terriers and refer to early cross-bred generations as “bull and terriers.” Because of their lineage, SBTs fall into the pit bull category.

In medieval England and Europe, Old English bulldogs competed in blood sports, like bull- and bear-baiting, which gave way to dogfighting in the 18th century. The matches were gnarly and inhumane and were ultimately outlawed in 1835.

Around that time, English breeders turned their attention to creating family-friendly pit bulls, and that’s how Staffordshire bull terriers came into existence. Breeder James Hinks of Birmingham, England, is credited for “perfecting” the breed in the mid-19th century. In short order, the staffy became beloved as a “working-class dog.”

Health and Entertainment for your Staffordshire Bull Terrier

The first staffy came to the United States in the 1880s. At that point, North American breeders used the SBT to develop an off-shoot breed, the American Staffordshire terrier — known as the AmStaff — which is heavier and taller.

In 1935, the first SBT standards club convened in the United Kingdom, and the Kennel Club of England accepted the breed. Today, the British Isles are home to approximately 15 different Staffordshire bull terrier clubs. On this side of the Atlantic, in 1975, the American Kennel Club first green-lit SBTs as its 120th recognized and register-able breed.

The Staffordshire bull terrier is a small- to medium-sized, short-haired dog with an average height of 14 to 16 inches for both males and females. Weight-wise, males tip the scales between 28 and 38 pounds, females between 24 and 34 pounds. SBT puppies are born teeny, but females weigh between 9 and 14 pounds and males between 10 and 15 pounds after three months. Staffies reach their adult sizes between 12 and 18 months.

Some breeds are riddled with inherent health problems, but staffies are relatively robust and hearty. SBTs’ most common ailments are L2HGA, skin allergies, and cataracts, all of which can be screened for genetically. Some Staffordshire bull terriers suffer from hip dysplasia and patellar luxation — a painful knee joint condition — but these problems aren’t as widespread among the SBT population compared to other breeds.[2]

The most common Staffordshire bull terrier health problems are:

Clever, brave, energetic, and loyal are the adjectives most used to describe Staffordshire bull terriers. If it’s not too hot, they can play tirelessly. According to Steve Eltinge, an SBT expert and author, “As early as three to four weeks of age, a staffy puppy will often prefer human companionship to that of [its biological] mother.”

Staffies are smart and reliable. Writer Dieter Fleig describes the breed as “a sort of everybody’s man Friday.” And, much to the delight of their owners, SBTs aren’t big barkers. But if another dog in the house likes to howl, staffies will mimic their buddies and “talk back.” Also, SBTs let out yelps of joy when playing.

But it’s important to remember that Staffordshire bull terriers were initially bred to battle other dogs. Though that instinct has significantly eroded over hundreds of years, they can still be aggressive with other dogs if not properly trained. Moreover, because of their lineage, SBTs also have a strong “prey drive” and will often chase small rodents that cross their path — but it’s not a pervasive issue. The overwhelming majority of staffies ultimately bond with other family pets and find friends at the dog park.

How to Take Care of a Staffordshire Bull Terrier

What must new staffy owners know about caring for the breed? What diseases and health issues do SBTs most-frequently face? What’s their optimal diet, and do they need special training?

Staffies aren’t picky eaters, and they’re not prone to ailments that require modified diets. However, since they can have skin allergies, foods with Omega-3 fatty acids best support their dermatological functions. Also, SBTs gain weight easily. So beware of foods that are packed with filler. Instead, choose higher-quality options with lots of protein.

Some vegetarians and vegans insist on feeding their dogs all-plant diets, which isn’t the best for Staffordshire bull terriers — or any dogs for that matter. Indeed, dogs aren’t obligate carnivores like cats — who can’t live without meat — but canines are facultative carnivores, meaning they mostly eat meat. Sure, in a pinch, dogs can survive for days on just plants, grains, and fruits. But by no means is it optimal, and canine individuals on flora-restricted diets may have more health problems and die sooner.

Staffordshire bull terriers have sleek and short coats of hair. As such, they don’t require as much grooming as fussier breeds, like poodles, bichon frise, and puli dogs. However, SBTs do well with once-a-week brushings and the occasional bath.

As is the case with all dogs, regular maintenance of ears and teeth keeps them in top shape. Moreover, humans who care for Staffordshires should trim their nails monthly; long ones cause the breed a lot of pain.

Due to their short, drip-dry coats, SBTs are susceptible to fleas and ticks. To keep your energetic fur ball pest-free, frequently use a flea comb in warmer months.

How much do Staffordshire bull terriers shed? Since they sport short coats, not a lot. You may occasionally find some hairs lying around the house, which can easily be vacuumed up, but that’s about it.

For people with allergies, staffies are great because they don’t collect much dust and dirt, and they’re not very odor-absorbent.

Staffies are highly energetic, and puppy training school does wonders for their socialization skills. When they’re taught how to control their abundance of enthusiasm, Staffordshire bull terriers are incredible additions to households of all sizes.

In terms of marking off their territory, Staffordshire bull terriers have high pain thresholds and regularly cross electric fences. It’s best to invest in a high backyard fence instead.

Staffies get overheated easily, but they also love to play! Daily romping is essential for SBTs happiness and health. People who live sedentary lives and cherish alone time should consider another breed because staffies love to be around their people. They love going for car rides, tagging along on hikes, or spending loads of time in the yard or inside playing fetch. And when you’re not romping around together, a staffy will cuddle up close.

During the summer months, or if you live in a year-round hot and humid climate, invest in a plastic kiddie pool for your staffy. They’ll need to take a dip every few minutes when playing outside under the sweltering sun. But don’t leave them alone while they’re in the pool. It may be shallow, but staffies are notoriously bad swimmers because of their stocky builds. So, like you would a child, keep an eye on them when wading in water!

Experts strongly advise basic obedience training for a Staffordshire bull terrier when it’s a puppy. Moreover, staffy puppies are orally stimulated. To save your furniture, shower the young ones with lots of chew toys. They love boomer balls, nylabones, and large Kongs.

What about SBT puppies and other family pets? Do they assimilate quickly? The answer largely depends on the age of the puppy in question and their personality. Some Staffordshire bull terriers immediately take to new four-pawed friends, while others see them as competition for their humans’ attention.

Generally speaking, though, it’s easier to bring a staffy puppy into a home with another dog than to bring another dog into a staffy’s home.

If you want two Staffordshire bull terriers, it’s best to get one male and one female. Plus, you shouldn’t bring them home at the same time. By doing so, you risk them bonding with each other and ignoring you — which can lead to unsolvable disciplinary problems down the road. So space them out by a couple of years.

Dubbed “the children’s nursemaid” and “the nanny dog,” staffies are notoriously great with — and protective of — babies and little kids. They’re also extremely attached to their adult humans. During cold weather, Staffordshire bull terriers love to cuddle up, and if there’s a child around, staffies usually pick them as snuggle mates. Learn more about the best breeds of dogs for families with children here.

Brave and loyal, SBTs are also very protective of their human infants and toddlers and will not back down if they sense a threat. However, staffies aren’t biters — but they do snarl to keep unwanted parties at bay!

What should you name your new SBT doggie? Popular names for Staffordshire bull terriers include:

How much do Staffordshire bull terriers cost to own?

Purebred Staffordshire bull terriers can cost anywhere between $800-$2,500. Adopting one will run you about $300. Staffies don’t have many grooming needs, so their monthly maintenance costs amount to food and toys. However, SBTs need basic obedience training when young, so factor that into your budget!

Staffordshire bull terriers are courageous, curious, and people-loving. They’re especially great with children, but it’s important to socialize them properly from an early age. Also, don’t forget to teach kids how to lovingly interact with and respect pets!

What climates are best for staffies?

Because of their stocky physiques, Staffordshire bull terriers overheat easily and aren’t fond of weather extremes. If you live in a hot area, you may want to look at another breed.

Staffordshire Bull Terriers are Omnivores, meaning they eat both plants and other animals.

What Kingdom do Staffordshire Bull Terriers belong to?

What phylum to Staffordshire Bull Terriers belong to?

What class do Staffordshire Bull Terriers belong to?

What family do Staffordshire Bull Terriers belong to?

What order do Staffordshire Bull Terriers belong to?

What type of covering do Staffordshire Bull Terriers have?

What genus do Staffordshire Bull Terriers belong to?

What is an interesting fact about Staffordshire Bull Terriers?

Staffordshire Bull Terriers are known for their loyalty to their families!

What is the scientific name for the Staffordshire Bull Terrier?

The scientific name for the Staffordshire Bull Terrier is Canis Lupus.