The striped rocket frog is one of the unique amphibious treasures of Australia.

Click through all of our Striped Rocket Frog images in the gallery. 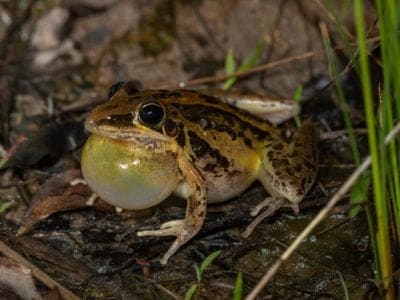 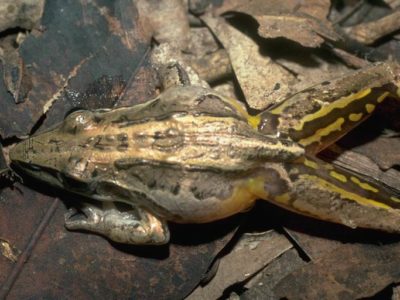 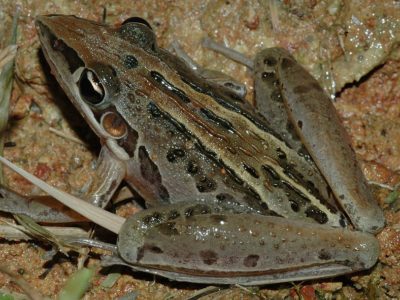 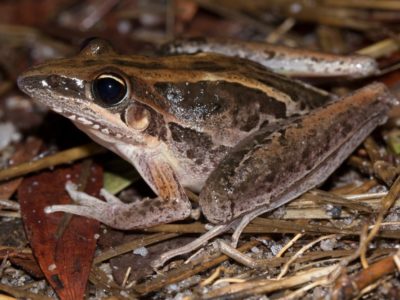 View all of the Striped Rocket Frog images!

The striped rocket frog is one of the unique amphibious treasures of Australia.

Known for its extraordinary leaping ability, this species makes a loud croaking sound that can be heard at night near ponds, wetlands, or other bodies of water. It shares a range with several other rocket frogs in eastern Australia, which makes it difficult to tell them apart from each other, but the key to distinguishing this species lies in its name. The dark horizontal stripes along the side of the body are a signature feature of this frog.

The scientific name of the striped rocket frog is Litoria nasuta. Litoria is a genus of Australian tree frogs (though the striped rocket frog does not actually spend much time in trees). The species name nasuta appears to be derived from the Latin word nasus, meaning nose, which refers to this frog’s pointed and ergonomic snout.

This species forms a loose relationship with several other species of Litoria rocket frogs, including the Kimberley rocket frog, the dwarf rocket frog, Freycinet’s frog, and the broad-palmed frog. The rocket frogs are often distinguished from other frogs by their strong body patterns, deep skin folds, streamlined appearance, and leaping ability. Together they belong to the family of Pelodryadidae, which includes all frogs native to Australia and Papua New Guinea.

The striped rocket frog is characterized by a pointed snout, warty skin, deep folds on the back, and exceptionally long legs, about twice the length of the actual body. As an amphibian, it has unwebbed front feet and partially webbed toes, all of which have small round discs at the tip. These round discs appear to be a common feature of many tree frogs, despite the fact that the striped rocket frog is mostly terrestrial.

Measuring slightly more than 2 inches long (not much larger than a matchbox), the body is colored grey, reddish-brown, or dark brown with a white stomach and yellow thighs. It is covered in dark stripes and some patches that run horizontally along the length of the body, though the exact pattern varies widely between individuals. It also has a horizontal pupil with a gold upper iris and a dark brown lower iris.

Both sexes are similar in size and appearance, but only the male has a yellow throat in the breeding season. This yellow throat consists of a flexible vocal sac that expands outward to amplify the sound of the male’s mating calls. It looks very much like an expanding balloon.

The striped rocket frog is a solitary species that hunts and feeds alone near the edge of the water. The only time it congregates together with other members of the same species is during the breeding season. But unlike many other species of Australian tree frogs, the striped rocket frog is a ground-dwelling species that spends most of its time hunting among leaves on the ground. It does not actually spend much time in the trees.

In order to find a mate, the male rocket frog makes its signature croaking sound at night. This begins with a slow chirping sound, which builds up in intensity to a raucous chattering noise, and then settles down to more chirps. This has been described as a “wick wick” sound followed by a “but but.”

In order to make its call, the frog expels air from the lungs and into the vocal sac. Air does not ever leave the mouth but instead moves back and forth between the mouth and lungs. The actual sound is produced by the vibration of the larynx and vocal cords, and then it’s amplified by the air sac. In order to attract mates, the frog needs to be quite loud and conspicuous, which has the unfortunate side effect of exposing its location to hungry predators, but this is an important element of the mating ritual.

The striped rocket frog inhabits the outer parts of northern and eastern Australia. Its natural territory extends from the Kimberley region of Western Australia to the city of Sydney in New South Wales, right along the coast and the surrounding inland areas. Its habitat also includes the southern lowland parts of Papua New Guinea. This ground-dwelling species prefers to live in open forests, flooded grasslands, swamps, and ponds.

The striped rocket frog is a nocturnal hunter that silently creeps up and catches food with its long, sticky tongue.

What does the striped rocket frog eat?

The diet of the striped rocket frog consists of insects, spiders, and worms. With its voracious appetite, this species helps to keep these prey population numbers in check.

These frogs do not face many threats in the wild besides their natural predators and the occasional habitat degradation. The population numbers appear to be in excellent condition.

What eats the striped rocket frog?

These frogs begin breeding in the wet season between spring and summer (in Australia, this would be December to February) when rainfall creates plenty of temporary waterholes for the frog to breed in. The male croaks at night to broadcast his location and attract a suitable female.

After they mate together, the female produces a cluster of about 50 to 100 eggs at a time right on the surface of the water. The parents have no other investment in the well-being of their offspring. Since they reproduce through sheer numbers, a lot of the young are lost to attrition and predation early on in their lives.

After hatching, the brown or gold-colored tadpoles remain in the shallow areas of the water. Well-adapted to their aquatic environment with temporary gills and long tails, they spend the first few weeks of their lives feeding and growing up to about 2.3 inches long, or about the same size as the adult frog.

After about one or two months, they undergo the metamorphosis into the adult form by losing their tail and developing a full set of functional lungs. At this point, they leave the waterhole in which they were born and move on a more permanent basis to the land. If they survive the tadpole phase, then the striped rocket frog has a lifespan of about 10 to 15 years in the wild.

These frogs are considered to be a species of least concern by the IUCN Red List. The Australian government also considers this species to be in no particular need of additional conservation efforts. It is not known how many of these frogs exist in the wild, but the population numbers appear to be stable and in good health. There are no significant threats to its survival, but continued residential and commercial development, along with some of the pollution it brings, may limit its range a bit.

Striped Rocket Frogs in the Zoo

These rocket frogs are not an exhibit at any American zoo.

Striped Rocket Frogs are Carnivores, meaning they eat other animals.

What do striped rocket frogs eat?

The striped rocket frog has a rather basic carnivorous diet of insects, worms, and spiders.