Found in warmer jungles and forests!

Click through all of our Tree Frog images in the gallery. 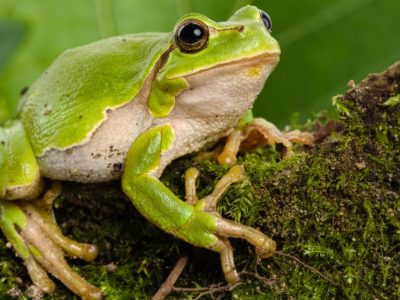 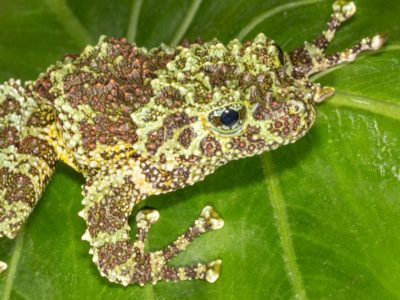 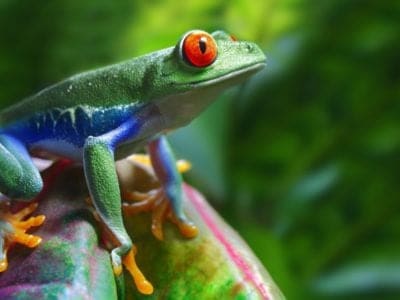 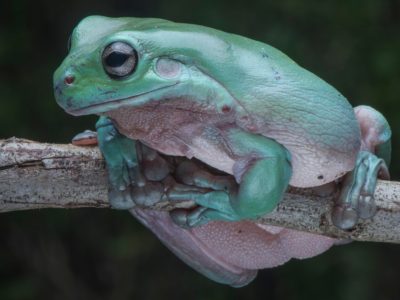 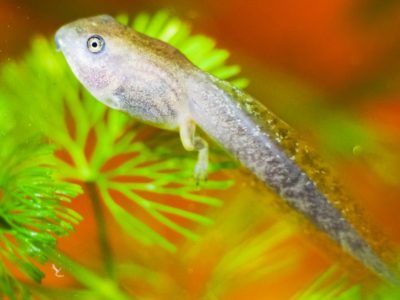 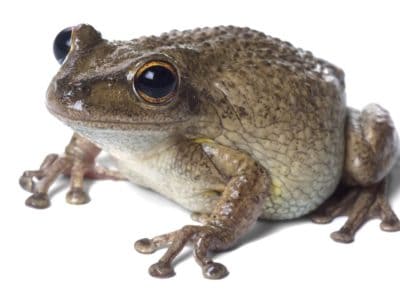 View all of the Tree Frog images!

Tree frogs are some of the world’s most whimsical amphibians, thanks to their cute eyes and unique legs and toes that allow them to climb trees easily.

Unlike their somewhat dumpy terrestrial counterparts, these frogs generally have bright colors that make them a favorite zoo exhibit. Their distinctive calls often make them heard and not seen in their native habitat as they are primarily active at night. Although these frogs live mostly in tropical climates, some species live in more temperate areas and hibernate during the winter.

Tree frogs comprise several families of the order Anura. Those in the family Hylidae with the scientific name Hyla are sometimes called true tree frogs and are the most numerous, with about 700 species. Nonhylid tree frogs have scientific names that incorporate the families Centrolenidae, Hyperoliidae, Rhacophoridae, and Microhylidae.

The most distinguishing feature of these frogs is their feet, as the last bone in their toes is claw-shaped. Toe pads with tiny suction cups and extraskeletal structures on their toes also help them climb trees. They come in a variety of colors, most commonly green, gray, or brown.

Because of the primarily arboreal habitat that finds them living on leaves and small branches, most of these frogs are small in size. The largest of these frogs in the world are the white-lipped tree frog found in Australia and Oceana, ranging from four inches to 5.5 inches long. The largest species in the Western hemisphere is the Cuban tree frog, found in the Caribbean and the southeastern United States with a length of 1.5 to five inches. The smallest species are less than an inch in length. The size of many of these frogs can be likened to a teacup. They are typically more slender than terrestrial frogs.

As one of the most striking members of the Hylidae family, red-eyed tree frogs may have developed their bright eyes, in part, so that predators may question their meal choice and go for a more dumpy prey. Another adaptation, called startle coloration, allows red-eyed tree frogs to flash their bulging eyes and reveal webbed orange feet and their bright blue-and-yellow flanks, often causing birds and snakes to stop and give time for the frog to flee. Their bright green color may also overstimulate predators’ eyes by creating a confusing ghost image.

American green tree frogs are a bright green, which helps them camouflage with surrounding foliage in the wild. They have a light white or cream-colored stripe from the side of the head down to their flanks.

White’s tree frogs encase their bodies in a milky white coating called caerviein that helps them survive in dry areas by conserving body moisture. Scientists have used extracts from their skin for medicines that fight staphylococcus bacteria, lower blood pressure, and treat cold sores caused by the herpes virus.

One of the more dumpy-looking species, the Cuban frog, is brown and somewhat bland in appearance. It is one of the larger types of frogs, with some growing to more than six inches. Females are generally larger than males.

Most species are nocturnal and solitary but will gather in large groups during mating season. Many spend their days sleeping on leaves and branches. In hot summer months, White’s tree frogs often go looking for water in people’s homes. When threatened, they emit an ear-piercing scream. Green tree frogs use a variety of barking calls for communication. Adults will frequently camouflage themselves in vegetation by tucking in their legs and closing their eyes.

These frogs live on every continent except Antarctica, with the highest concentration in Central and South America, where you will find about 600 species. About 30 species live in the warmer regions of the southeastern United States. Most, but not all, species are arboreal, which is why they have long legs and toe pads to help them climb and jump. Non-arboreal species live in lakes and ponds or among moist ground cover.

Red-eyed frogs live in tropical lowlands from southern Mexico, through Central America and into northern South America. They are nocturnal, hiding in the rain forest canopy.

An adaptable species called White’s tree frogs live in Australia and New Guinea. They prefer moist forests and typically do not live near bodies of water, collecting rainwater that collects on leaves and in cup-shaped plants and crevices. This species’ adaptability allows them to live in suburban and agricultural areas with people and is commonly found in bathrooms, water tanks, and reservoirs.

Like other amphibians, these frogs are carnivores, eating insects like crickets and flies, worms, spiders, moths, and other invertebrates. The large Cuban frog will eat anything that will fit in its mouth, including lizards, snakes, small mammals, and even other frogs. These frogs ambush their unsuspecting prey with their long, sticky tongues.

Predators include a variety of mammals, reptiles, birds, and even some large fish, mainly due to the frogs’ small size. The official conservation status of these frogs is stated as least concern, because of their wide distribution and assumed large population. Nevertheless, these frogs experience threats to their overall population, including habitat destruction by humans, pollution, climate change, and disease. Habitat destruction is a concern in Europe, although conservation efforts in several European countries have successfully rebuilt some tree frog habitats.

The males of almost every species attract mates via barking calls, with each tree frog type having its unique call.

Some hatch as miniature adults, but more commonly, these frogs hatch as tadpoles that develop into adults. Females lay eggs on leaves above water, allowing hatched tadpoles to drop into the water to develop. The metamorphosis from tadpole to adult can take a few weeks to a few months.

White’s tree frogs begin to reproduce in their second year and often feast for several days before mating. Males develop a black pad on their thumbs to help grip females during mating. Clutch size varies according to species and can contain 150 to 1,000 eggs, with hatching beginning about 28 to 36 hours after laying.

Scientists have no real estimation of the worldwide population of these frogs as they are widespread and are not endangered. However, their populations are thought to be declining as humans continue to encroach on their habitats.

Tree Frogs in the Zoo

The Smithsonian National Zoo in Washington DC keeps red-eyed tree frogs along with White’s tree frog. Both species receive a diet of crickets, cockroaches, and worms. The best time to see these frogs in the zoo is in the early morning and late afternoon. They are primarily nocturnal creatures, so most of the time, visitors will see them sleeping on top of green leaves in their exhibit. You’ll have to look carefully, though, as these frogs tend to blend in with their environment.

Tree Frogs are Carnivores, meaning they eat other animals.

What Kingdom do Tree Frogs belong to?

What class do Tree Frogs belong to?

What phylum to Tree Frogs belong to?

What family do Tree Frogs belong to?

What order do Tree Frogs belong to?

What type of covering do Tree Frogs have?

In what type of habitat do Tree Frogs live?

What is the main prey for Tree Frogs?

What are some predators of Tree Frogs?

Predators of Tree Frogs include birds, mammals, and reptiles.

How many eggs do Tree Frogs lay?

What is an interesting fact about Tree Frogs?

Tree Frogs are found in warmer jungles and forests!

What is the lifespan of a Tree Frog?

Tree Frogs can live for 2 to 4 years.

How fast is a Tree Frog?

A Tree Frog can travel at speeds of up to 10 miles per hour.

Where do tree frogs live?

Every continent, except Antarctica, provides a home to tree frogs. They usually live in tropical or semi-tropical climates in forests, woodlands, and marshes with high humidity, primarily near a body of water.

What do tree frogs eat?

Tree frogs are carnivorous creatures that eat a variety of insects, including flies, ants, crickets, beetles, and moths. However, when they are tadpoles, they primarily eat plants.

Touching a tree frog can be potentially dangerous to humans and animals because the skin of some species contains a toxin that protects the front from predators. The poison in the skin can cause swelling, nausea, and even death to smaller animals.

Can you keep a tree frog as a pet?

American tree frogs (Hyla cinerea) make good pets, but because of their mildly poisonous skin, you shouldn’t handle them with your bare hands.

What do tree frogs need to survive?

First off, they need a moist, warm environment with humidity of at least 70%. When kept in captivity, tree frogs don’t need direct sunlight but merely a light source that mimics the day/night cycle. They also require a steady diet of insects or worms and a temperature between 65 degrees and 85 degrees Fahrenheit.