The smallest carnivorous mammal in the world!

Click through all of our Weasel images in the gallery. 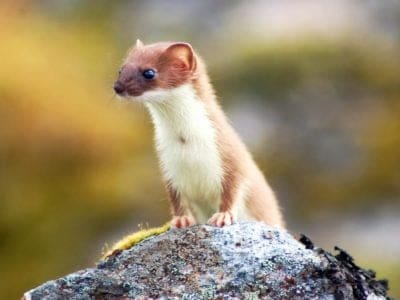 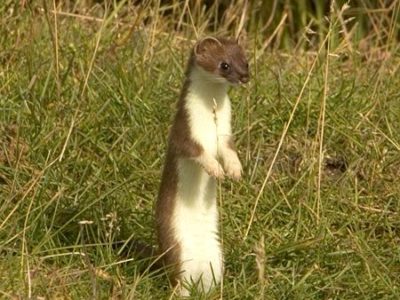 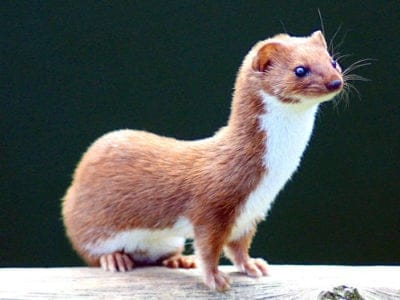 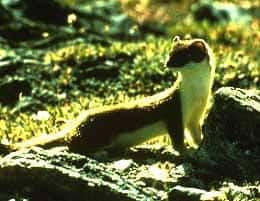 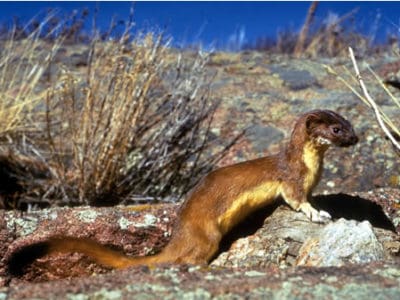 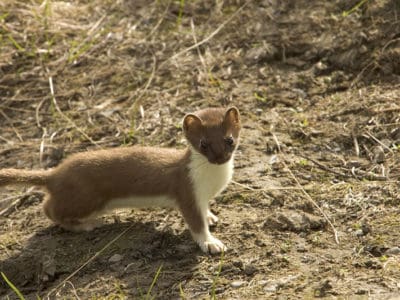 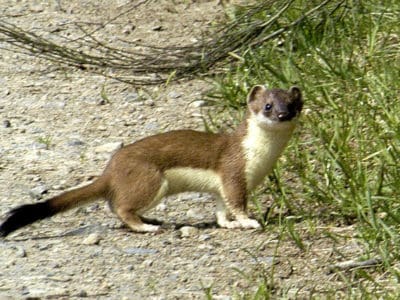 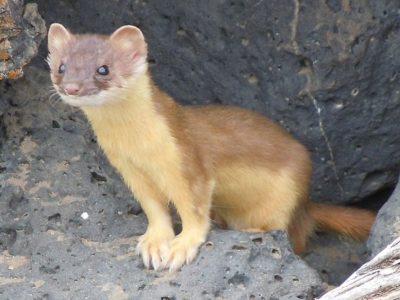 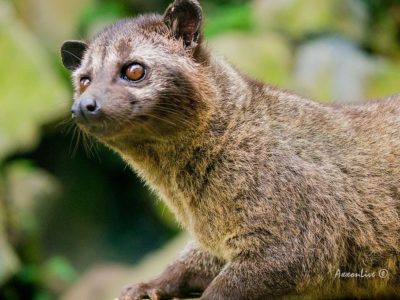 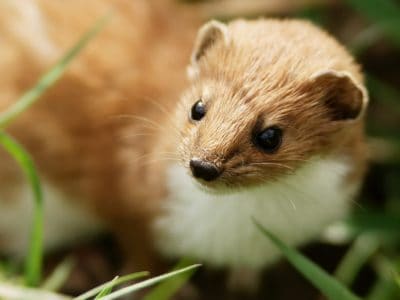 View all of the Weasel images!

The Weasel is a small-sized carnivorous mammal that is found on every continent with the exception of Australia and its surrounding islands, along with the more hostile polar regions. There are numerous Weasel species that all vary in size, colour and slightly with their behaviours depending on where in the world they live. The Common Weasel (also known as the European Weasel and the Least Weasel) is the most widespread and can be found across much of the northern hemisphere. These tiny but vicious predators are the smallest carnivorous mammals in the world growing to no more than 6 inches from their nose to the tip of their tail. Weasels belong to the mustelid family of carnivores and are most closely related to similar species such as Stoats which are larger in size and have a black tip at the end of their brown tail. Although Weasels are fairly common animals throughout much of their natural range, populations in certain areas have been affected by habitat loss and they are often seen as pests by farmers.

The Weasel has evolved to prey on small animals like no other carnivore as their long, slender bodies are perfectly suited for following mice into their burrows. Weasels are animals with small and narrow heads that are not much thicker than their necks and along with their short legs and flexible spines means that they are able to easily manoeuvre themselves around in small, confined spaces. The Weasel has a sharply pointed snout and triangular head, small rounded ears and black eyes. Their coat is dark or light brown in colour on their head, back, legs and tail and white on their underside and moults twice a year from the darker winter coat to the flatter, lighter one in April, and again from the summer to the winter coat in August or September. This not only ensures that by November the Weasel is as warm as possible but in areas further north, individuals will often change from brown to white in colour so that they are camouflaged amongst the snow.

Weasels are animals that are natively found in a variety of habitats such as woodlands, coniferous forest and on grassy plains in North America, Europe, Asia and in northern parts of Africa. Like their larger cousin the Stoat, Weasels have also been introduced to other countries (mainly as a form of pest control) like New Zealand and a number of other islands. However, like the introduction of a number of small predators to such isolated places, Weasels have had a profound effect on native wildlife which has evolved in the same way for millions of years without the threat of small, terrestrial carnivores. Weasels are opportunistic predators and can also be found in more urban areas and particularly close to farms where there is a varied and tempting supply of food. Despite their adaptability, Weasels are threatened by habitat loss in parts of their natural range.

The Weasel is a solitary animal that spends a great deal of its life hunting for small mammals on the ground during both the day and night. Weasels are territorial animals that patrol home ranges that vary in size depending on the habitat and the availability of food and although the home ranges of males and females are known to overlap, the two tend to avoid each other except when mating. Within their territory, Weasels are known to make nests in crevices, tree roots and abandoned burrows which are lined with grass and fur and are where the Weasel is able to safely rest. Weasels are incredibly strong and powerful for their size and are able to catch and kill animals that are much larger than themselves, before carrying it back to their burrow. In order to make sure that they have the best view of their surroundings, Weasels are known to sit up on their hind legs exposing their white underside.

The only time Weasels will tolerate one another is when a male and female meet to mate. After a gestation period that lasts for around five weeks, the female Weasel gives birth to a litter of between one and seven kittens in her burrow. Young Weasels develop remarkably quickly and are not only weaned by the time they are two months old, but are also able to hunt small prey and will leave their mother within the next few weeks to establish a territory of their own. Although female Weasels tend to live for around three years, they are not able to successfully breed until their second and third years. Males however, will rarely reach their first birthday as their inclination to roam further in search of a mate means that they are often more vulnerable to numerous predators.

The Weasel is a skilled and ferocious hunter that is able to actually enter the burrows of its prey which is something that most predators are unable to do. By tracking small mammals using the tunnels that they make through the undergrowth and even under the snow, the Weasel is able to follow its victim back to its burrow and then catches it inside. Rodents such as Mice and Voles, along with Lemmings further north, make up the bulk of the Weasel’s diet along with the occasional bird. They are also known to eat eggs and are able to kill animals larger than themselves such as Ducks and Rabbits. Although the Weasel may be the perfect shape to get into small burrows, their long body covers a relatively large surface area and so looses a lot of body heat. In order to ensure that they have enough energy, Weasels must eat around a third of their body weight every day to survive leading to them being such prolific hunters.

Despite their fast and dexterous nature, the small size of Weasels means that they are preyed upon by a number of different predators throughout their natural range. Birds of Prey such as Owls, Hawks and Eagles that are able to spot them from high in the sky are the most common predators of the Weasel, along with Foxes and Snakes. Weasels are also preyed upon by domestic Cats and Dogs in areas where they exist close to Human settlements. Their opportunistic nature though also means that they are seen as pests by farmers and are often persecuted for stealing livestock, mainly poultry and eggs. In some areas around the world, Weasels are threatened by habitat loss and a lack of their prey species can also have devastating effects on local populations.

The Weasel is a carnivorous animal that has sharp, pointed canine teeth which are used for biting and shearing flesh. Although small, their teeth are incredibly sharp and are capable of delivering a fatal bite to animals more than double their size. Weasels have five toes on each of their paws that are tipped with small, non-retractable claws. Although these are primarily used for holding onto prey, their claws also help Weasels to burrow into the ground surprisingly quickly. Although males and females have similar coat colours and markings, males are actually substantially bigger with a body length a quarter longer than that of the female and weighing nearly double.

The ferocious and greedy nature of the Weasel has led to them getting a bad reputation amongst farmers particularly who trap and kill them to prevent further loss of livestock. They have however, been introduced to countries where they are not naturally found due to their versatile and dominant nature as a form of natural pest control. Along with a number of native British species, Weasels are often found as characters in books and appear in children’s songs.

Today, the Weasel is listed by the IUCN as an animal that is of Least Concern of becoming extinct in its natural environment in the near future. Although they are considered wide-spread but rare in North America, they are common throughout Europe and Asia and introduced populations to other countries are also stable. Some isolated populations however are becoming more increasingly vulnerable.

Are Weasels herbivores, carnivores, or omnivores?

Weasels are Carnivores, meaning they eat other animals.

What Kingdom do Weasels belong to?

Weasels belong to the Kingdom Animalia.

What class do Weasels belong to?

Weasels belong to the class Mammalia.

What phylum to Weasels belong to?

Weasels belong to the phylum Chordata.

What family do Weasels belong to?

Weasels belong to the family Mustelidae.

What order do Weasels belong to?

Weasels belong to the order Carnivora.

What type of covering do Weasels have?

Weasels are covered in Fur.

What genus do Weasels belong to?

Weasels belong to the genus Mustela.

Where do Weasels live?

Weasels live in the Northern Hemisphere.

In what type of habitat do Weasels live?

What are some predators of Weasels?

Predators of Weasels include hawks, foxes, and snakes.

How many babies do Weasels have?

The average number of babies a Weasel has is 5.

What is an interesting fact about Weasels?

Weasels are the smallest carnivorous mammal in the world!

What is the scientific name for the Weasel?

The scientific name for the Weasel is Mustela nivalis.

What is the lifespan of a Weasel?

Weasels can live for 1 to 3 years.

What is a baby Weasel called?

A baby Weasel is called a kitten.

How many species of Weasel are there?

There are 10 species of Weasel.

What is the biggest threat to the Weasel?

The biggest threat to the Weasel is the lack of prey species.

What is another name for the Weasel?

The Weasel is also called the common weasel, European weasel, or least weasel.

How fast is a Weasel?

A Weasel can travel at speeds of up to 15 miles per hour.