There are two distinct breeds!

Click through all of our Welsh Corgi images in the gallery. 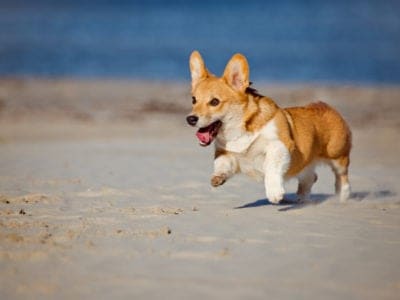 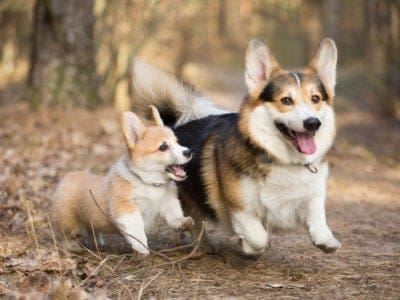 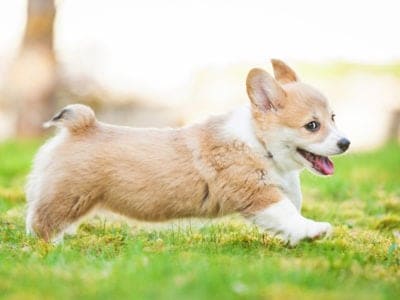 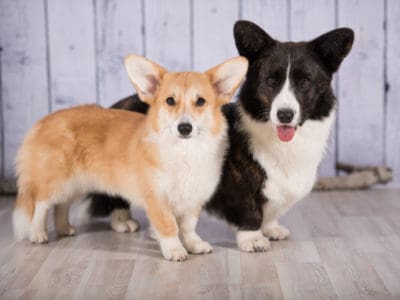 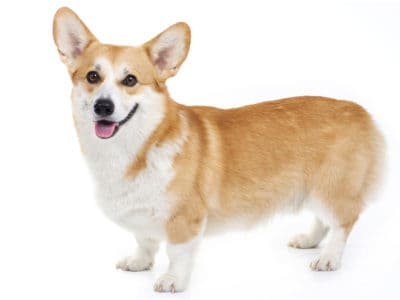 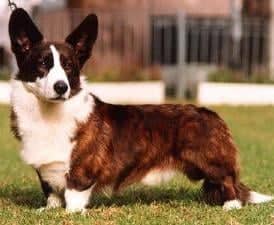 View all of the Welsh Corgi images!

The Welsh corgi is a small herding dog that probably originated from the countryside of Wales sometime before the year 1000 AD.

Its small size is well-suited for nipping at the heels of cattle or sheep to herd them around their grazing lands or into pens. The breed can be identified by its short but powerful legs, big black eyes, compact body, and long ears relative to body size.

There are two types of Welsh corgi: the Pembroke and the Cardigan. The main differences between them are their coloration, size, and bone structure. The Pembroke (which is the official dog of Queen Elizabeth II) has an orange body and a white mark running down the face, muzzle, chest, and lower legs.

The Cardigan corgi has a similar pattern except with a brown mottled color. According to the American Kennel Club, the Pembroke corgi is the 13th most popular breed in the country (the Cardigan ranks at 68). The breed is also popular in the United Kingdom.

The Welsh corgi is a small-sized dog with a compact frame and short but powerful legs. Males and females are approximately the same size, but the male tends to weigh more on average. The Cardigan corgi breed is also ever so slightly larger than the Pembroke breed. Here is a breakdown of precise sizes:

The Welsh corgi is a healthy breed of dog with generally low rates of bleeding problems, degenerative issues, and hip or elbow dysplasia (which is a limping or gait problem that results from a developmental abnormality in the joints).

However, the breed does suffer from modest rates of cancer, eye diseases, and ear infections. Another potential health issue, due to the corgi’s compact and unique body structure, is back pain and degeneration. You should therefore be careful with letting the dog navigate stairs, beds, and other large gaps on its own.

You can mitigate some of the risk of disease with an early checkup and screen from a vet. However, breeders are generally good at screening for potential genetic or developmental problems before they ever trouble an owner. The typical life expectancy of the Welsh corgi is between 12 and 13 years. To sum up the information, these are the corgi’s four most common health problems:

Health and Entertainment for your Welsh Corgi

The Welsh corgi is a friendly and playful dog, eager to give its owner plenty of affection. It has an extremely exuberant and outgoing personality that manifests as a sort of manic energy. But although capable of big spurts of activity, a Welsh corgi also sometimes loves nothing more than to lie around the home or curl up on your lap.

Because of its history as a herding dog with sheep and cattle, the Welsh corgi can be a little nippy and barky and also rather fearsome and bold, but it is not overly pushy or aggressive in its behavior. The breed is best satisfied when it has some kind of task to carry out, so you should attempt to give it plenty of things to do. Their intelligent behavior marks them out for the performance of tricks and games.

How to Take Care of a Welsh Corgi

The Welsh corgi is a somewhat middle maintenance breed and does require quite a bit of daily work to fully care for its needs. So before purchasing, you should prepare in advance for its food, exercise, and grooming requirements.

Also make sure your dog has an annual checkup at the vet to look for potential health problems before they can fully develop.

The corgi requires high-quality dog food to support an active and energetic lifestyle. It is a good idea to feed the dog two smaller meals a day rather than a single larger meal to aid in its digestion. You can also give your dog treats on a regular basis to reward it for good behavior and obedience, especially to train it for certain behaviors. But because the corgi has a tendency to become overweight easily, you should carefully manage the dog’s diet so as to avoid excessive calorie intake. The diet is something you should discuss with your vet in more detail.

Before buying a Welsh corgi, you should be prepared to set aside a modest amount of time for the dog’s maintenance and grooming. Because of its regular shedding, a weekly brushing, sometimes accompanied by a bath to loosen excess hair, should be sufficient to keep this breed looking nice and healthy, though make sure it is dry before brushing.

You may need to brush more often during the times of the year with excess shedding. A-Z-Animals recommends using the GoPets two sided dematting brush.

The nails can get rather long and should be trimmed on a regular basis. You should also brush its teeth and clean the ears regularly to prevent possible infections and health issues.

Because of its intelligent and loyal personality, the Welsh corgi should take to training with relative ease. It is recommended to provide your dog with training classes and socialization opportunities from an early age, when the dog is most adaptable and compliant. The best time to do this is during its first four months of age.

However, even adult corgis are relatively easy to train for new tricks and behavior. Corgis can be willful and stubborn at times, but positive reinforcement and rewards-based training should allow them to engage with their owner with minimal problems.

Because of its highly active lifestyle, the Welsh corgi does require a modest amount of exercise every day. They are very eager to engage in walking, running, or just playing ball in between longer stretches of rest and relaxation. However, the short legs of the corgi may make it difficult to keep up with a bicycle or a fast running pace. The corgi should not go too long without some kind of exercise with its owner, so you should be prepared to set aside some time every day to keep it active with either you, your family, or a friend.

Because of its herding instincts, the breed does tend to exhibit moments of manic behavior. So if the dog starts to become very excitable by racing around the house, then it might be a signal that you should take it outside to burn off some of that energy with healthy physical activity. One thing to keep in mind is that the corgi should not be exposed to extreme heat or cold. During the summer months, you should keep it properly hydrated and cool to avoid overheating. This breed is quite agile and athletic, so it is not uncommon to see it participate in herding and sports events for dogs.

The Welsh corgi is a very good breed to own from a young age, since it is very willing to be trained and socialized. For best results, you may want to acquire the puppy from a well-known and reputable breeder, even though this may be more expensive. This should minimize the chances of potential health or behavioral problems. Make sure the puppy is scheduled to visit a vet for an early checkup to get all of its health affairs in order as soon as possible.

Due to their small size and affectionate personality, this breed gets along very well with babies and children. It has quite a loyal nature that drives it to protect other people. For this reason, the corgi makes for a very good family dog.

However, especially during the first introductions, some form of constant adult supervision is always recommended to prevent any poor interactions between dogs and children that may develop from the dog’s rather excitable and overeager nature.

Dogs Similar to the Welsh Corgi

The Welsh corgi is a unique breed of dog in many ways. However, there are several other breeds with similar characteristics.

Popular Names for the Welsh Corgi

According to the website Rover.com, these are the most popular names for the Welsh corgi:

Let’s face it, unlike other dog breeds that might have celebrity owners or media appearances, the Welsh Corgi has an undisputed most famous owner. That, of course, would be Queen Elizabeth II. She has owned dozens of Pembroke Welsh Corgis throughout the years.

The Welsh corgi is a very popular dog breed for a simple reason. Whether you’re living alone or with other people, this breed has an adaptable personality that works well in many different situations, and with its love for people, the corgi is generally tolerant of its owner’s lifestyle. However, you should be aware that this breed does require a fair amount of maintenance, so you should have the time and inclination to take care of it.

Welsh corgis can be a little rambunctious if they don’t receive enough attention. After all, they were bred to herd cattle and sheep, so the corgi wants to have a purpose and drive, which can find its outlet in troublesome and annoying behavior. But besides that, they are generally quite playful and friendly, even around complete strangers. If you treat it with enough kindness, then the Welsh corgi is more than happy to reciprocate with equal affection.

What is the difference between a Welsh corgi and a Pembroke corgi?

This is actually a source of confusion for many people. The Welsh corgi is not a single breed of dog, but rather two types: the Pembroke and the Cardigan. In other words, the Pembroke is actually one of the two specific types of Welsh corgi. Both the Pembroke and the Cardigan are named after the counties from which they originated in Wales. Besides coloration and bone structure, the differences are fairly minimal, but the Pembroke is overall the younger and more popular breed. Unless otherwise indicated, most of the information about behavior, activity, and maintenance found within this guide should apply universally to both breeds.

Welsh Corgis are Omnivores, meaning they eat both plants and other animals.

What Kingdom do Welsh Corgis belong to?

What phylum to Welsh Corgis belong to?

What class do Welsh Corgis belong to?

What family do Welsh Corgis belong to?

What order do Welsh Corgis belong to?

What type of covering do Welsh Corgis have?

Welsh Corgis are covered in Hair.

What genus do Welsh Corgis belong to?

What is an interesting fact about Welsh Corgis?

There are two distinct breeds of Welsh Corgi!

What is the scientific name for the Welsh Corgi?

The scientific name for the Welsh Corgi is Canis lupus.

What is the lifespan of a Welsh Corgi?

Welsh Corgis can live for 13 years.