Click through all of our Yorkie Poo images in the gallery. 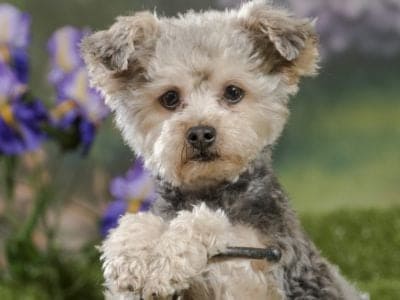 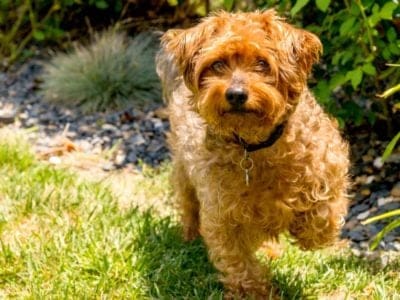 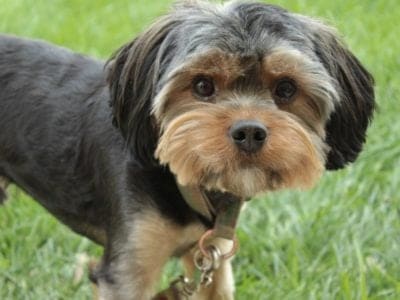 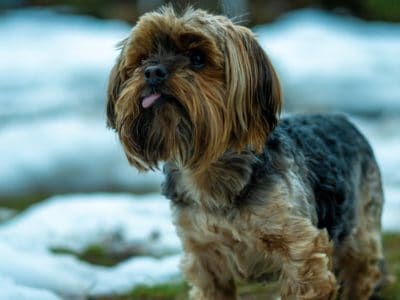 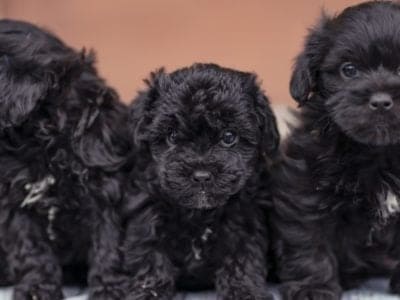 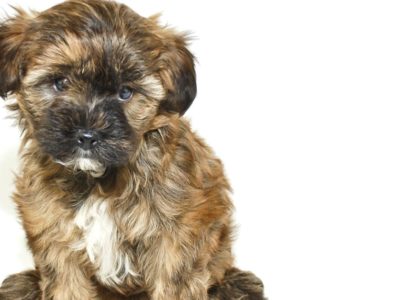 View all of the Yorkie Poo images!

The Yorkie Poo is a unique mix between a purebred Yorkshire terrier and a toy or miniature poodle.

Both parent breeds are among the most popular in the United States. The Yorkshire terrier is a small, energetic breed, originating from northern England, with a very long coat of elegant dark or brown hair. The poodle is a very skilled and intelligent dog, originating from Germany or France, with long tufts of curly water-resistant hair. When you combined them together, you get the Yorkie Poo (also called a Yorkipoo, Yorkapoo, or Yorkadoodle), a very affectionate and energetic mix.

First created by breeders in the 1980s and 1990s, the Yorkie Poo is considered to be a type of “designer dog.” This means it’s not just a regular mix. It is purposefully crossed between two different pure breeds to obtain desirable characteristics from both. Since the Yorkie Poo is a cross of two different breeds (and a relatively new one at that), it does not have any agreed-upon standards, but it is generally characterized by a small, petite body and very expressive face. The soft fur can be either curly or straight with a wide variety of different colors and markings, including black, white, cream, chocolate, apricot, and gray.

3 pros and cons of owning a Yorkie Poo

A full grown Yorkie Poo is a small-sized dog with a very thin frame. There is little difference between the males and females.

Since the Yorkie Poo is a cross between two different breeds, even members of the same litter may inherit very different genetic health vulnerabilities from both of its parents. That makes it somewhat difficult to predict which health problems will emerge. The most common health problems tend to be cancer, hypothyroidism, ear infections, epilepsy, and eye conditions like retinal degeneration. Much less commonly it may be prone to certain developmental bone and joint disorders (such as hip dysplasia and patellar luxation) or blood flow disorders (Portosystemic Shunt and Legg-Calve-Perthes Disease). But although these conditions might be rare, they can significantly affect the dog’s quality of life. Good breeders will try to screen out health problems early. To sum up some of the most common health problems you should look out for:

Kind, affectionate, friendly, enthusiastic, and intelligent, the Yorkie Poo loves to meet new friends and receive attention from people. It has a rather carefree and easy-going personality that also makes it very approachable and fun to interact with. Since the Yorkie Poo likes to express its big personality by barking, this hybrid is somewhat suitable as a watchdog. However, this trait may not appeal to people who don’t tolerate noisy dogs. The Yorkie Poo can thrive in all types of living situations, but its behavior is probably best suited for apartment or city dwellings.

Health and Entertainment for your Yorkie Poo

How to Take Care of the Yorkie Poo

Despite its small size, the Yorkie Poo does require a moderate amount of maintenance to really get the most out of this mix. Because of the dog’s long hair, grooming will probably take up most of the owner’s time. You will need to spend some time every day satisfying the dog’s needs for physical exercise and mental stimulation. As a puppy, the Yorkie Poo should have an early health checkup and receive all of its shots at the vet. It’s a good idea to have yearly checkups after that.

A full-grown Yorkie Poo should preferably eat up to a cup of high-quality dog food, divided into two different meals per day. The exact amount may vary slightly with the dog’s age, size, and activity level. You should monitor your dog’s weight carefully to prevent it from overeating. If the dog starts putting on pounds (ideally, you should be able to feel but not see its ribs), then it may be time to cut back on the calorie intake.

Despite the fact that the Yorkie Poo barely sheds at all (which makes it a good choice as a hypoallergenic dog), it still does require frequent brushes almost daily to prevent matting and tangling in the dog’s fur. It is also a good idea to trim around the eyes and mouth so the hair doesn’t obscure its face. If you want to give your dog a particularly fancy hairstyle like its poodle parent, then you should seek out a professional groomer about once every month or two. The Yorkie Poo does a very good job of keeping itself clean, so you should only give baths when the dog becomes especially dirty. It may be necessary to trim the nails when they grow long and start clacking on the floor. And you should think about brushing its teeth almost daily to prevent diseases and bad breath.

The Yorkie Poo is an intelligent and highly trainable mix that should be eager to learn all kinds of different commands, from the basic to the advanced. It responds best to positive reinforcement methods in the form of both praise and food. If you raise your voice or react harshly, this sensitive dog might resist your commands or become discouraged. Puppies should be trained and socialized as early as possible.

The Yorkie Poo is a highly energetic breed that likely needs around 30 minutes of exercise a day, preferably in the form of walking, playtime, and fetch, though it does know how to settle down and rest with its owner. With its small frame, this hybrid dog might not be well-suited for particularly difficult and stressful competitions or exercises. The good news, though, is that the Yorkie Poo doesn’t require a lot of room in which to play. It can do well with apartment living, and just a little yard space should suffice for some free running.

As a hybrid mix, the Yorkie Poo can vary quite a bit in appearance and temperament even within the same litter, so it’s always a good idea to take a little extra time to look into what the puppy is like before purchasing it. If you can, you should always buy puppies from reputable breeders that screen for early health problems. Even though there’s no dedicated rescue network for the Yorkie Poo, you may also sometimes find this dog in a rescue group or shelter. Rescue groups are very attentive to the health of their dogs.

The Yorkie Poo is a very gentle, loving, and affectionate companion for children of all ages. But you should also be aware that such a small and frail dog may not tolerate a lot of rough play from younger children. That is why it might function best in a household with slightly older children who can be taught to gently care for this dog. If you do decide to pair together a Yorkie Poo and younger children in your home, then you should always carefully monitor all interactions between them and be prepared to intervene if the situation goes poorly.

Dogs Similar to the Yorkie Poo

If the Yorkie Poo is a type of dog that really appeals to you, then the two most similar breeds are obviously its parents, the Yorkshire terrier, and the poodle. You also might want to consider looking into the following types of dogs.

Since this is a relatively new type of designer dog, there aren’t a lot of famous examples of it in popular culture. However, both its parents, the poodle and the Yorkshire terrier, have been featured prominently in pop culture. Famous poodle owners include Elvis Presley, Marilyn Monroe, and Winston Churchill, and a famous Yorkie named Pasha was once owned by the Nixons in the White House. Both breeds are also very popular on the dog show circuit. A terrier called Cede Higgins won the Best in Show award at the 1978 Westminster Kennel Club dog show.

Popular Names for the Yorkie Poo

If you’re looking for a good name for your dog, then you might want to consider one of these popular Poodle or Yorkshire terrier names.

View all 8 animals that start with Y

What is a Yorkie Poo?

A Yorkie Poo is a cross between a Yorkshire terrier and a toy or miniature poodle. This hybrid dog usually has some blending of characteristics between the two parents. However, because some traits are more dominant than others, there won’t be a perfectly equal distribution of traits. That means some characteristics might be difficult to predict just based on the parents alone.

The Yorkie Poo is a small dog with a petite physique, a slight muzzle, and big ears. The long, soft coat of fur can either be smooth or curly with some mixture of black, brown, white, cream, or apricot colors.

Yes, the Yorkie Poo is a noisy dog for its size. Because it likes to bark in response to passing cars or knocks on the door, the Yorkie Poo actually makes for a decent watchdog.

No, the Yorkie Poo is very gentle and affectionate. It will almost never lash out at a person unless provoked or scared.

Do Yorkie Poos shed a lot?

The Yorkie Poo barely sheds at all and has a reasonably good hypoallergenic coat. That should make it suitable for people with allergies.