In a series of leaps, this creature can cover almost 30 feet of distance in just a few seconds.

Click through all of our Bush Baby images in the gallery. 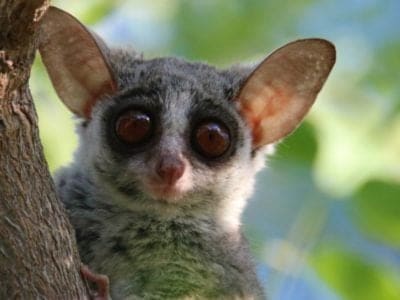 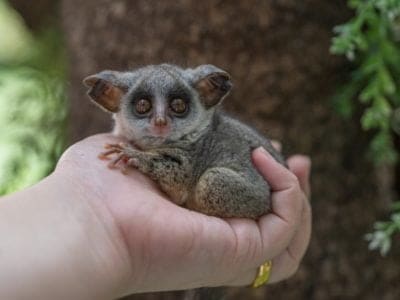 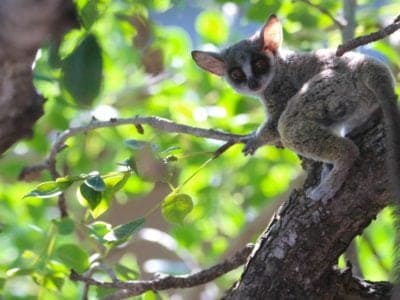 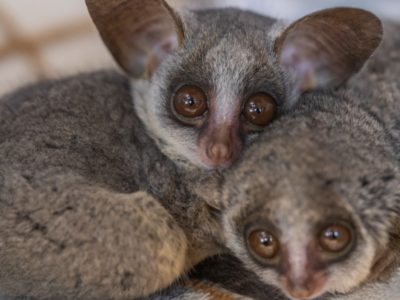 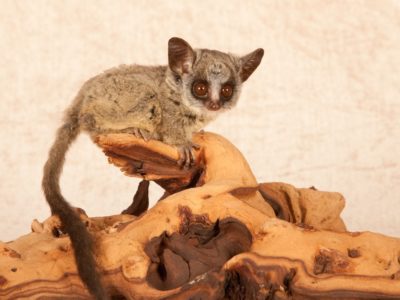 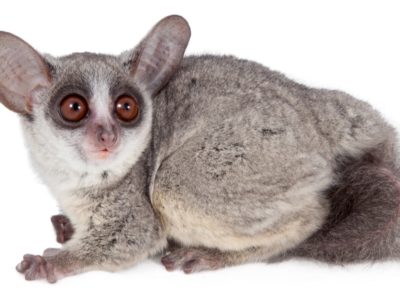 View all of the Bush Baby images!

Bush babies are primates that live in Africa. They are sometimes called lesser bush babies, galagos, or nagapies. Bush babies are nocturnal and spend most of their time high up in the trees also called the canopy. They’re omnivores eating fruit, insects, tree gum, and sometimes small animals. Bush babies have a lifespan of up to 16 years in the wild.

Galago senegalensis is the scientific name for a lesser bush baby. The word Galago refers to its genus while the word senegalensis means originated in Senegal.

Some of the other names they go by include galago and nagapie. The Afrikaans word nagapie means, ‘night monkey.’ These primates belong to the Galagidae family and the class Mammalia.

There are only 20 known species of galagos. However, scientists believe there are more species that simply haven’t been discovered yet. This comes as no surprise when you think about it. These primates are shy and try to stay out of sight! A few of the known species include:

A galagos’s huge, saucer-like eyes are its most notable features. Their eyes are rust or brown with black pupils. They allow them to see in the dark as these animals hunt for prey at night. Point a flashlight at a bush baby and their eyes shine in the dark like a cat’s eyes.

Galagos have large ears that can move independently of one another. Not surprisingly, these animals have excellent hearing. They can even hear the activity of insects buzzing or flittering through the area. In fact, their hearing is so sensitive, they have to fold their ears against their head while sleeping during the day so they can block out all of the forest sounds. Too noisy!

Their wooly coat of fur can be gray or brown paired with yellowish hair on their legs. They use their thick, hair-covered tail along with their strong hind legs to help them spring into the air to capture flies and other insects. Their tail also helps them to balance on tree branches. When they are on the forest floor, bush babies get around best by leaping. They would be very slow and awkward if they walked on all four feet!

Galagos can weigh from three and a half ounces to three pounds depending on its species. Furthermore, they can measure from five to eighteen inches long. As a comparison, a three-pound bush baby is equal in weight to half a brick. A five-inch-long galago is equal in length to one-third of a bowling pin. The brown greater Galago is the largest species in the Galago family.

The best defenses a lesser galago has against predators are its speed and ability to move through the trees. When leaping and jumping in a forest canopy, these primates fold their large ears back against their head, so they won’t be harmed by passing branches. They are active at night making it a little easier for them to hide. Of course, they are pursued by some predators that can also see very well in the dark.

This animal is extremely vocal. If there’s a predator in the area, bush babies signal each other with chattering, clicking and clucking sounds. This gives other galagos a chance to hide from the danger. Alternatively, a female bush baby and her mate may signal to each other by making sounds in the treetops. A group of bush babies may also use their vocalizations to confuse a predator wandering nearby.

Bush babies are shy animals. Their shyness combined with their nocturnal activity means they are seldom seen by people. galagos are both social and solitary animals. They spend some time communicating and playing together in the trees and spend some time alone. A family of bush babies may rest together during the day and go out on their own to hunt when night falls. Older galagos are more likely to spend most of the day alone.

These primates live on the continent of Africa. Some bush babies live in the forests of sub-Saharan Africa while others make their homes on the savanna. There are galagos such as the brown greater galago that live in tropical forest habitats. Alternatively, the Somali galago lives in scrub and woodland regions.

Galagos don’t migrate. But they sometimes move short distances to look for an area with a larger supply of insects and other prey. Or a female bush baby may travel a short distance in search of a nest for her young.

Bush babies face other threats including habitat loss due to farm expansion and logging activity. When their habitat is taken, it also means they lose the food supply there.

In addition, these creatures are sometimes captured and sold for a high price to people who want an exotic pet. They are sometimes sold online or advertised in classifieds by people who breed them. In an effort to conserve these animals, most states in the United States have made it illegal to keep a galago as a pet.

The lesser galago has a conservation status of Least Concern.

What does a bush baby eat?

Galagos are omnivores and eat the food source most plentiful in their environment. Plus, their diet differs according to their species. Lesser bush babies eat mostly insects, tree gum, and fruit while bigger species such as the greater galago eat small animals such as frogs and birds. They are active and hunting for prey at night.

Since these animals spend so much time in trees, they hydrate themselves by licking water off leaves and out of cracks in branches. This allows them to stay up in the trees and avoid going down to ground level where they are more vulnerable to predators.

The Lesser Galago has two breeding seasons. One is in November and the other is at the end of February. Males fight with one another for the attention of females until the largest male has chased off all of the others. They mark their territory, including the female, with their urine. Some Galago species have one partner while others have multiple partners.

Newborn Galagos are called infants. These nagapies are born with their eyes half-closed and unable to move very far. The mother has her babies in a hollow tree or a nest that has been abandoned by a bird. If she ever feels her babies are in danger of a predator or unsafe for any reason, a female Galago will move her young to another nest. She does this by carrying them one by one in her mouth.

She nurses her infants, then weans them at around six weeks old. The young primates begin learning how to find insects and access tree gum. They can begin to live independently shortly after they are weaned.

The lifespan of a galago goes up to 16 years.

The exact population of the lesser galago is unknown. However, the IUCN Red List of Threatened Species reports their conservation status as Least Concern with a decreasing population.

What is a bush baby?

Lesser bush babies also called nagapies and galagos are small primates about the size of a squirrel. They are known for their large ears and saucer-like eyes. This animal lives on the continent of Africa. Their habitat includes forests and savannas. Female bush babies have their babies in hollow trees or a nest abandoned by a bird. These primates are omnivores eating fruit, tree gum, insects, and small animals. There are at least 20 species of bush babies. Scientists believe there may be double that number as they continue to look for more species in the dense forests of Africa.

Bush babies are omnivores. They eat the food that is most abundant in the region where they live.

Where do bush babies live?

Lesser bush babies live in Africa. Specifically, they live in countries including Tanzania, Ethiopia, Nigeria, and Senegal along with others. Forests and savannas are two of their common habitats.

Can I have a bush baby as a pet?

You may look at a bush baby’s thick fur and saucer-like eyes and figure it would make a great pet. They are sold for a high price on the exotic pet market. Many people think that because of this animal’s small size it would be manageable as a pet to keep in the house like a cat. But it’s illegal to keep this animal as a pet across most of the United States. Also, these animals need to live high in the trees or on a savanna with other bush babies in order to enjoy long and healthy lives. In short, this wild animal is not suitable as a pet.

What are bush babies called?

Lesser bush babies are sometimes called galagos and nagapies. The word nagapie translates to ‘night monkey.’ They got the name ‘bush baby’ because their cry sounds a lot like a human baby’s cry.

How long does a bush baby live?

The lifespan of this animal goes up to 16 years.

No. An animal called the Nycticebus kayan is poisonous to humans. A bite from a Nycticebus kayan can cause a person to go into shock and die. These animals are very similar in appearance to the bush baby, but they are two different creatures.