They have natural snowshoes

Click through all of our Canada Lynx images in the gallery. 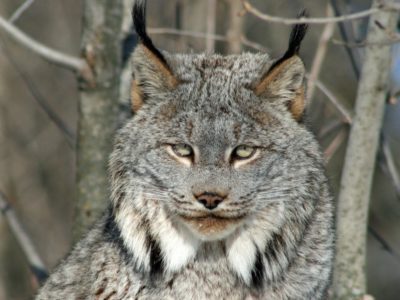 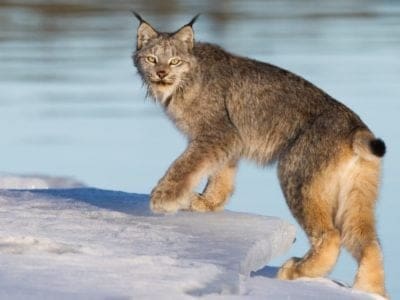 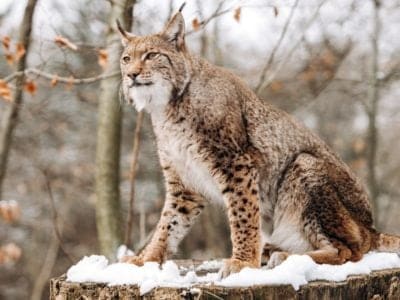 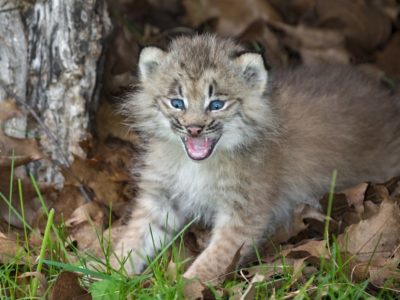 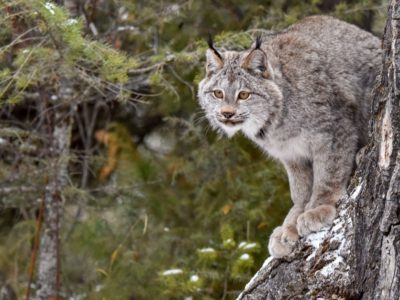 View all of the Canada Lynx images!

The Canada Lynx is known as the Climbing Cat!

If you visit the woods in Canada and the Northern United States, do not be surprised if you see a cat high above your head. The Canadian lynx spends a lot of time in trees so that they can jump down on snow hares. It has an unusual-shaped paw that acts like a snowshoe so that it can easily move through the snow. The unusual hair in their ears may act like hearing aids.

The scientific name for Canada lynx is Lynx canadensis. It is a member of the Felidae family. This family also contains the Eurasian lynx (L. lynx) and the Iberian lynx (L. pardinus) in Europe. Lynx or lynxes are both acceptable spellings of the plural. The word lynx comes from the Greek word “to shine,” and it may refer to the lynx’s eyes.

This cat’s body is covered with short hair. The tip of the tail is black. Lynx have a silvery appearance to them because their hair has a minute white tip. The soft coat is marked with dark spots, and it may have thin strips on its body. Lynx have long tufts of hair coming from their cheeks. These longer tufts may help the animal know which way the wind is blowing, which can be essential to its hunting success.

This animal has long legs, with the back ones being longer than the front ones. They also have unique large feet. The biggest claw on each paw juts out at an angle. These adaptations on the paws help the lynx distribute its weight better when walking through snow.

Canada lynxes also have long tufts of hair in their triangle-shaped ears. These tuffs of hair may be extremely sensitive to sound. Therefore, they may act as a hearing aid to help the Canada lynx know when a predator is nearby.

Lynx have over 20 muscles that help them move their ears. Therefore, they can move each ear in a half-circle. These adaptations allow them to locate prey faster.

Canada lynx are quiet and solitary animals. They tend to live a solitary life, except for a brief period when mating. Some biologists have also observed young kittens hunting together for brief periods. These facts may help them survive as a group before they get big enough to find and fight prey independently.

Canada lynx are quiet animals. They seldom make a sound unless it is mating season. Then, males will scream at each other to try to determine who gets to breed a female. The screaming can continue for hours. The screams start at about 0.7 kHz, rising to about 1.15 kHz before falling to 0.6 kHz. The calls are an inverted V when measured, and they fade out instead of just stopping.

Canada lynx have excellent eyesight. This outstanding eyesight allows them to see prey at night up to 250 feet away. They do most of their hunting at night and hide during the day.

Canada lynx live in successional forests where snowshoe hares are abundant. These habitats include weedy areas, grasslands, old fields and pastures, shrub thickets, and young forests. They would prefer that these areas be as far away from humans as possible. Additionally, they want at least two acres in an undisturbed place. Most would like 10 or more acres in their home range. Most are found in hilly areas where the elevation varies from 975 feet to 8,000 feet. While males almost always have a range all to themselves, the range of females often overlaps.

Canada lynx also need old-succession forest when it comes time to give birth. These forests provide good cover for the Canada lynx to raise their young. These animals do not build dens. Instead, they choose a home in a fallen log, cave or some other available area.

Canada lynx feed almost exclusively on snow hares. Over 70% of their diet consists of these animals. They are considered monophagous animals, as they eat only one food. There are other monophagous animals in the world. For example, monarch butterflies eat only milkweed, while giant panda bears eat only bamboo.

Humans are the main predator of Canadian lynx. They often kill them for their pelts, which are used to trim some fashion clothing.

Another predator for the Canadian lynx is coyotes, who are usually close to the top predator in areas where these animals live. Coyotes have recently expanded their territory, and they eat the snowshoe hares that the lynx prefer to dine on. Researchers suggest that if more wolves are introduced, they can feed on the coyotes, increasing the snowshoe hare population. In turn, there would be more Canadian lynx.

Females come into heat in February or March, and they only have one heat cycle per year. The heat cycle lasts 1-to-2 days. If successful, then a litter of one to nine kittens is born eight to ten weeks later. Each kitten will weigh about 7 ounces at birth.

The kittens are born blind, but they will open their eyes at about 10 days. Some kittens will start eating meat that the mother provides at about 30 days. They will continue to eat mom’s milk for about 100 days.

Males do not help raise the young at all. Young usually stay with their mother for 10 months. Then, the mother pushes them away. They often remain together for a few more months before starting their solitary life.

There are thousands of Canada lynx in Canada and Alaska. The United States population of Canada lynx has dramatically shrunk. Yet, there are still stable populations in Maine, Montana, Washington, and Colorado.

Canada lynx are not particularly dangerous as they love to avoid people. Yet, if they feel cornered, they will attack humans.

Canada lynx do not make good pets. In many states, it is against the law to own Canadian lynx. They are not domesticated and still have wild instincts. This means that they will fight you if they feel threatened.

How many Canadian lynx are left?

In the backcountry, there are thousands of Canadian lynx left in Canada and Alaska. There are still some left in the lower 48 states, but there are not as many as once lived there. Wildlife officials believe there are stable lynx numbers in Maine, Montana, Washington, and Colorado.

What is the difference between a Canada lynx vs. a bobcat?

While a bobcat looks very similar to a Canada lynx, there are many differences. Bobcats do not have tufts of hair in their ears, on their faces, or tails while Canada lynx has it in all three places. Canada lynx have a shorter tail than bobcats. The paws on a bobcat are not as big as on a Canada lynx. Additionally, paws do not have the claw sticking out at a different angle, making it easier for a Canada lynx to walk in the snow.

What does the Canada Lynx eat?

Canada lynxes eat snow hares almost exclusively. Their numbers will go up and down depending on how many snow hares are available.