Can jump 5 feet in the air from a standing position!

Click through all of our Cassowary images in the gallery. 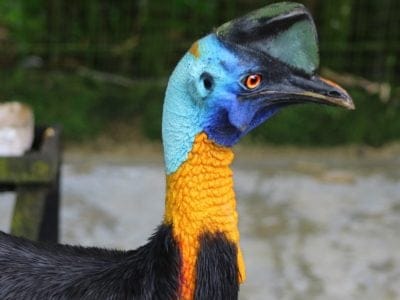 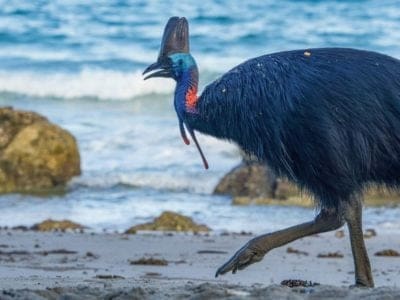 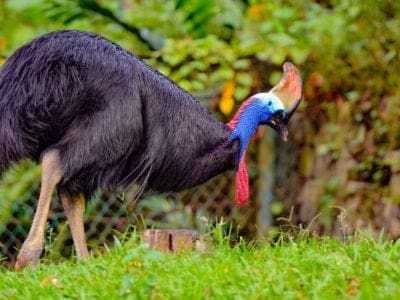 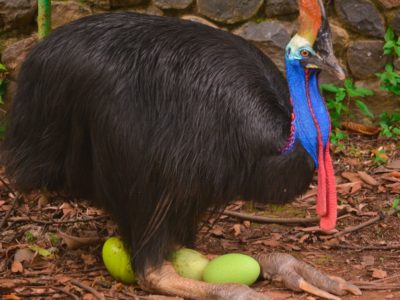 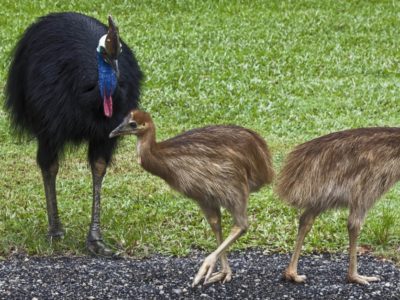 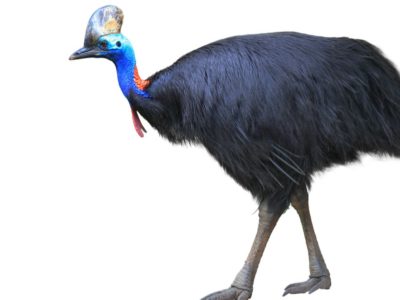 View all of the Cassowary images!

The cassowary is a type of ratite, which is a long-legged, usually large, flightless bird that’s a member of the Palaeognathae infraclass.

Its wings are nearly vestigial and only have a few quills. The feathers of the cassowary are coarse, and some have filaments that resemble hairs. Because of this, the cassowary was hunted and is raised for its feathers. Females are bigger than males, and the bright colors of their heads and necks are more vivid. Even more striking is the knifelike claw on the inner toe of each foot. The claws of this mostly fruit-eating bird are at least as formidable as the talons of the most powerful bird of prey.

Where To Find Cassowary

The bird’s nest is constructed by the male upon fallen leaves on the ground. It is shallow but sometimes lined with leaves or grass. After the female lays her eggs in the nest, the male chases her away.

There are three species. Their classifications are:

There was a fourth species, the pygmy cassowary, Casuarius lydekkeri, but it is extinct. There are no subspecies of the extant birds.

The bird has a bright blue head and a red neck that bears two red wattles. Each long, scaly leg ends in a three-toed foot whose inner toe bears that lethal claw, which can be 4.7 inches long. These birds live in New Guinea, which includes Papua New Guinea and Indonesia and the Aru Islands and Seram, an island that is part of Indonesia. Its population is over 2500 birds and is declining.

The southern cassowary is shy and solitary and will chase other cassowaries away except during the mating season. It eats fruit that has fallen to the ground and is capable of eating fruit that will poison other animals. The bird will also eat mushrooms and other fungi and small vertebrates like lizards. Despite that famous claw, it is not used to grab prey the way raptors use their talons.

Though it is true that these birds will attack humans, they seem to only do so when they’re provoked, frightened, defending eggs or chicks, or under attack themselves. Some cassowaries associate humans with food and will simply jump at a human in expectation of a meal.

The northern cassowary is known for its orange-gold or red neck and single wattle. It is built along the same lines as the southern cassowary, but is a bit smaller in height and lighter in weight with the females weighing about 128 pounds. It is only found in northern New Guinea’s coastal swamplands and lowland rainforests. Populations are also found on the islands of Waigeo, Batanta, Yapen, and Salawati. There are an estimated 2500 to 10,000 of these birds, but like the southern cassowary, their population is declining.

Like the southern cassowary, the northern cassowary eats fruit and small animals that it can handle. It will also eat carrion, and babies eat the feces of their father and siblings. Indeed, grown birds are known to eat their own feces if they still have undigested fruit.

The biggest threat to these birds is the human. Humans kill them for their meat and their feathers and inadvertently kill them on the highways. Their chicks, which drop at a sign of danger, are eaten by dogs and pigs. Pigs also eat their eggs, and the cassowary’s habitat has been fragmented and destroyed by logging and development. Other things that threaten cassowaries are diseases and natural disasters such as typhoons.

The breeding season for cassowaries occurs in winter and spring. Males will claim a territory, build a nest, and court a female by vocalizing and inflating his throat and dancing while she watches. If she accepts him and doesn’t drive him off, she’ll sit on the ground, and they’ll mate. She will then lay four to six green eggs in his nest. When she’s done, he’ll chase her off and incubate the eggs himself for about 47 to 56 days. In the meantime, the female will find another male. She’ll lay as many as 20 eggs before she’s through.

Baby cassowaries stay with their fathers for nine months or until their first molt, though they will be three years old before they have grown-up plumage. Some chicks stay with their fathers for as long as 18 months. The baby cassowaries are covered with brown down with black streaks. The father becomes very aggressive if he feels the chicks are under threat from predators.

Are Cassowaries herbivores, carnivores, or omnivores?

Cassowaries are Omnivores, meaning they eat both plants and other animals.

What Kingdom do Cassowaries belong to?

Cassowaries belong to the Kingdom Animalia.

What phylum to Cassowaries belong to?

Cassowaries belong to the phylum Chordata.

What family do Cassowaries belong to?

Cassowaries belong to the family Casuariidae.

What order do Cassowaries belong to?

Cassowaries belong to the order Casuariiformes.

What genus do Cassowaries belong to?

Cassowaries belong to the genus Casuarius.

What type of covering do Cassowaries have?

Cassowaries are covered in feathers.

In what type of habitat do Cassowaries live?

What is the main prey for Cassowaries?

What are some predators of Cassowaries?

Predators of Cassowaries include dingos, crocodiles, and humans.

What are some distinguishing features of Cassowaries?

How many eggs do Cassowaries lay?

A cassowary lays between four to six green eggs. The eggs are bright green at first, then fade.

What is an interesting fact about Cassowaries?

Cassowaries can reach speeds of 30mph!

What is the scientific name for the Cassowary?

The scientific name for the Cassowary is Casuarius.

What is the lifespan of a Cassowary?

Cassowaries can live for 40 to 60 years.

What is the Cassowary's wingspan?

How fast is a Cassowary?

A Cassowary can travel at speeds of up to 31 miles per hour.

How fast does cassowary fly?

A cassowary doesn’t fly, but it can run 31 miles an hour, and jump 5 feet in the air.

When do cassowary leave the nest?

Cassowary chicks leave the nest very soon after they hatch because they are precocial, but their father takes care of them for at least nine months.

Why is the cassowary so dangerous?

The cassowary is dangerous because, though it lacks talons like other birds, each foot has a clawl ike a dagger, and if the bird is threatened it may attack. Even if it doesn’t use the claws, a bird that weighs as much as a grown-up human can cause damage if it jumps on you, and its kick is powerful enough to break bones.

Can a cassowary kill you?

Unfortunately, cassowaries have been known to kill people.

Is a cassowary a dinosaur?

Being a bird, a cassowary can be thought of as a type of modern dinosaur.

What to do if you see a cassowary?

If you see a cassowary and are afraid it’s going to attack, back away slowly, and put something between you and the bird, such as a tree or a backpack.

How to say Cassowary in ...