Fun Fact
This breed is also known as the Bohemian Terrier (Bohemia was an historical Medieval kingdom and a region of the modern Czech Republic)
Temperament
Alert, inquisitive, and adventuresome
Diet
Omnivore

Click through all of our Cesky Terrier images in the gallery. 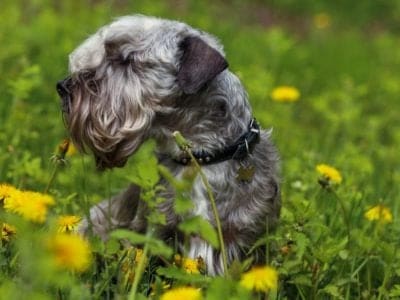 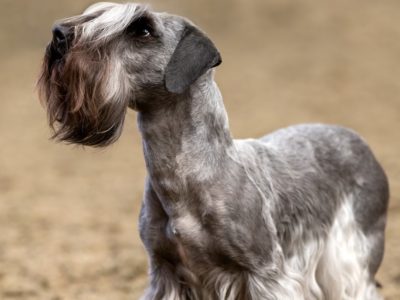 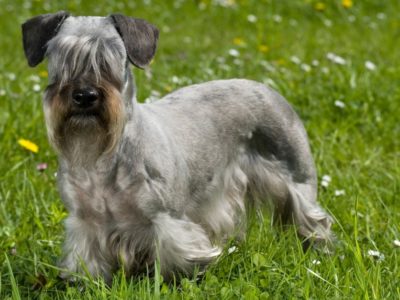 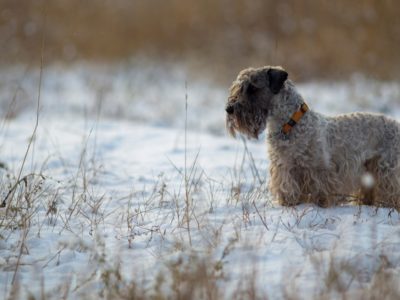 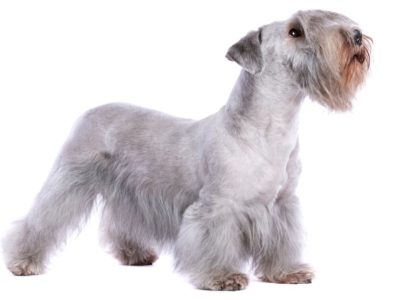 View all of the Cesky Terrier images!

The Cesky Terrier (pronounced chess-kee) is a hard-working but fun-loving dog native to the Czech Republic. The father of this breed was geneticist and hunter Frantisek Horak, who, in 1948, sought to create a working terrier that could hunt foxes and other small game in the forests surrounding Prague, then part of Czechoslovakia. To arrive at his ideal dog, he crossed a Sealyham Terrier and a Scottish Terrier together over several generations. Despite being very niche in the United States, it was first recognized by the American Kennel Club in 2011.

The Cesky is characterized by short legs, a rectangular and muscular frame, and downturned ears. The soft silk coat comes in several shades of grey, including platinum and charcoal. Less commonly, it will develop a lighter brown color. The coat grows quite long around the snout, giving this dog the appearance of a beard and moustache. Temperamentally, the Cesky is calmer and less energetic than most other breeds of terrier, which may appeal to owners who don’t want a high maintenance dog.

3 pros and cons of owning a Cesky Terrier

The Cesky Terrier is a small, short-legged dog with a sturdy frame. There are few differences in size between the males and females.

The Cesky Terrier is a very healthy type of dog with a lifespan of some 12 to 15 years. While the gene pool in the United States is still fairly small, breeders are working to minimize genetic health problems. This breed is prone to heart disease, progressive retinal atrophy, cataracts, cancer, patellar luxation (essentially, a loose kneecap), and Scotty cramp (chronic spasms that affect the dog’s ability to move; this condition is serious but not life-threatening). Good breeders should naturally screen for these health problems, but it might be a good idea to have a thorough physical examination at the vet. To sum up the most common issues:

The Cesky Terrier is an excellent choice for owners who want a small dog that’s nevertheless athletic, alert, fearless, and adventuresome. Calmness is another defining trait of this breed. It doesn’t get riled up or excited over much and should be on good behavior. Despite being friendly and affectionate toward its acquaintances, this breed is just as reserved and distrustful toward strangers. This makes it a good watchdog. However, with a little time and affection, it’s very possible for strangers to earn the trust of the Cesky Terrier. Another good quality is that the Cesky Terrier doesn’t need too much space and should adapt well to apartment living.

How to Take Care of the Cesky Terrier

The Cesky Terrier is actually a good choice for novice terrier owners. While it still requires quite a lot of time and investment, this dog is probably easier to care for than many other breeds of terrier. Perhaps the main reason for this is the ease with which it can be trained. The Cesky Terrier responds well to human commands and lacks the stubborn streak of other terriers. If you decide to purchase the Cesky Terrier, then you should try to find a high-quality dog breeder in your area who selects only the best dogs and screens for health problems. Another option is to look around various shelters or rescue agencies, but this dog is so rare in the United States that it is unlikely any rescue group will carry them. After bringing your dog home, make sure it has a physical examination at the vet and regular visits after that.

Health and Entertainment for your Cesky Terrier

The Cesky Terrier needs about 1.5 cups of high-quality food every single day, based on its size, age, and activity level. Owners should not leave out more food than is necessary, because the dog has a tendency to gain weight.

The Cesky has a fairly hypoallergenic coat characterized by short hair around most of the body, leaving long hair on the legs, stomach, and face. However, it is quite different from the typical rough-haired terrier. While many terrier breeds to be hand stripped (a method of removing the top layer of the coat by hand), the Cesky should suffice with weekly brushes and the occasional clipping every six to 10 weeks (depending on the climate). A professional groomer will be best equipped to trim the dog’s hair, although it may be possible to do it on your own. Bathing needs to take place in between grooming sessions since the coat does not tend to naturally remove dirt on its own. You should also check the ears regularly (and clip the ear hairs) to remove any excess debris or obstructions. Trim the nails on a regular basis before they become long and unwieldy.

The Cesky Terrier was bred to be a fairly intelligent and trainable dog with the ability to track down prey while on the hunt. This breed will benefit greatly from early house training, socialization, and basic commands. It also needs to be taught to avoid chasing prey. Fortunately, the Cesky lacks the stubborn streak of many other terriers that may lead it to ignore commands. As a sensitive breed, it should respond best to a positive training style. If you become too aggressive, then this breed might shut down and become unresponsive.

The Cesky Terrier needs about 30 to 60 minutes of exercise every single day in the form of walks, fetching, and playtime. This dog also excels at agility challenges and competitions. Unless this breed has been well-trained from the beginning, it is not a good idea to let this dog run free, since it has a strong prey drive and might wander off against the objections of its owner. That is why this breed does best with a fenced yard to play in. When you take it for a walk or run, the dog should normally be kept on a leash.

The Cesky Terrier is always bred to meet a particular standard, so there is little deviation in appearance except for the coat color. Puppies are normally born with a very dark coat, and it usually takes a few years for it to lighten a bit toward a gray or brown color. As mentioned previously, they will benefit from a disciplined training regime with a strong leader as its guide. Cesky breeders are uncommon, and rescue groups are even rarer, so it may take some effort to track down one of these dogs.

The Cesky Terrier should excel in the presence of children. Its patient, loyal, and playful personality make it a good companion. The dog’s small size is also very approachable for everyone. But parents should supervise all interactions between dogs and younger children.

Dogs Similar to the Cesky Terriers

The Cesky Terrier bears the strongest similarities to the following breeds of terriers:

As a relatively obscure and niche breed, the Cesky Terrier hasn’t made a major cultural impact in the United States, but it is a lot more common within its native Czech Republic.

Popular Names for the Cesky Terrier

If you’re looking for a good Czech name or just a good terrier name in general, then you might want to consider the following options:

What is a Cesky Terrier?

The Cesky Terrier is a type of working terrier (a terrier that pursues its prey into burrows and ground) that originated from then Czechoslovakia around 1948. It is curious, inquisitive, adventurous, and hard-working. And it doesn’t shed much.

What is the price of a Cesky Terrier?

The price of a new Cesky Terrier tends to be somewhere between $500 and $2,500. Adopted dogs tend to be the least expensive; it may be possible to find one for only a few hundred dollars. Dogs with a strong pedigree will tend to have a higher price. New puppies from a good breeder will probably cost somewhere in between.

The Cesky Terrier is a very light shedder. Its hypoallergenic coat should be mostly okay for people with allergies.

Do Cesky Terriers bark a lot?

Cesky Terriers may have a tendency to bark on some occasions such as when a stranger is at the door. But it’s also not a very mouthy dog either.

Yes, the Cesky Terrier is an excellent family dog. It has a rather playful personality and alert but fairly mellow temperament. Once the dog has actually become part of the family, it may be very protective of all the members of the household.