A hairless breed of dog!

Click through all of our Chinese Crested Dog images in the gallery. 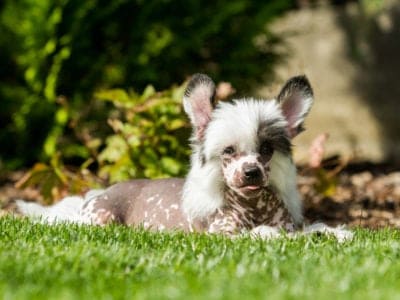 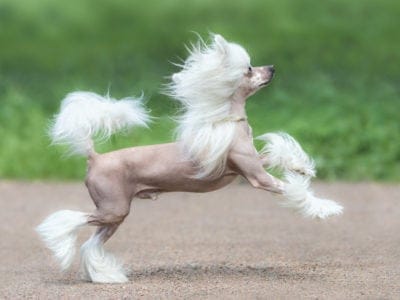 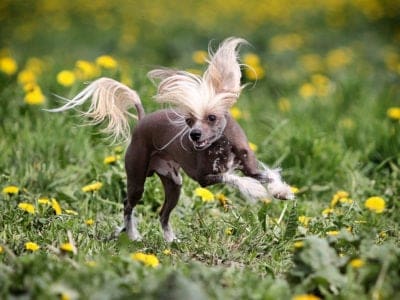 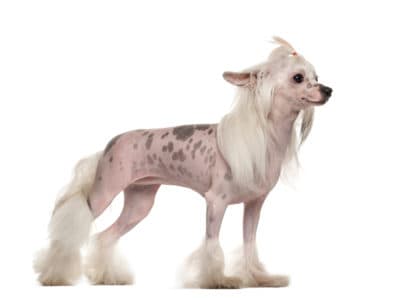 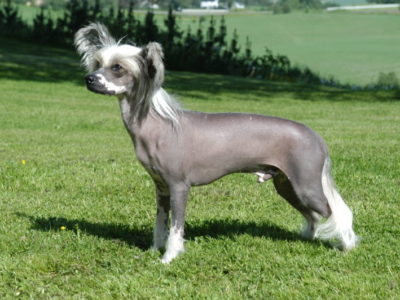 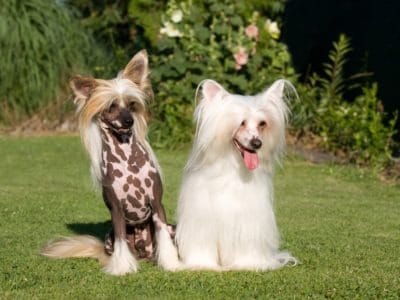 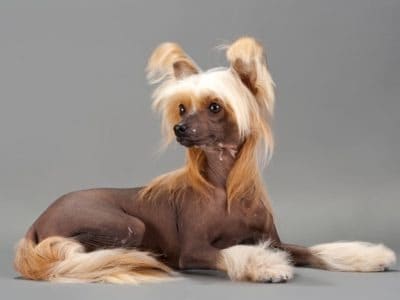 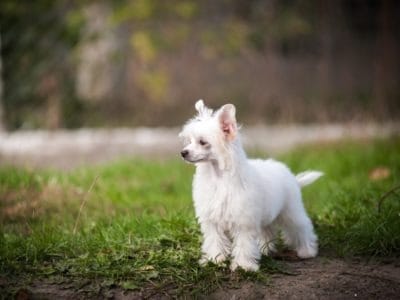 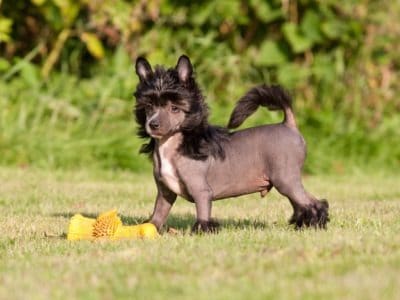 View all of the Chinese Crested Dog images!

Except for a flowing mane and the big, fluffy ears, this breed has smooth, hairless skin with a fleshy or dark color. It is believed that this breed was originally brought to China from Africa and then adapted to fit the preferences of its breeders.

Besides their obvious utility as loyal pets, they also served a role as rat catchers aboard Chinese ships, where they were introduced to the rest of the world on voyages. They gained popularity in the United States during the late 19th century. Although not common or widespread, this breed is a treasured companion for many owners.

There are two types of Chinese crested dog: the powderpuff and hairless. As the names imply, the powderpuff has a long, soft coat of fur, while the hairless only has hair around the face, ears, tail, and feet. To clear up a point of confusion, the hairless and powderpuff versions are not separate Chinese dog breeds.

The hairless trait is actually caused by an incomplete dominant gene, which means the offspring only needs to inherit the trait from a single parent to also express it. The powderpuff trait needs to be inherited by both parents simultaneously. For this reason, it’s possible for both hairless and powderpuff variations to appear in the same litter of two purebred parents. The two variations are otherwise the same, so it simply comes down to a matter of preference with the hair.

This breed is notable for its small size. Males and females vary by a small amount.

The Chinese crested dog is a fairly healthy breed with only a few significant health problems. Among the most common, it is prone to several eye diseases, including retinal atrophy (a degenerative condition), lens luxation (in which the lens becomes detached from the rest of the eye), and glaucoma (damaged optical nerves).

Health and Entertainment for your Chinese Crested Dog

Other potential problems include cancer, autoimmune disorders, and patellar luxation, a genetic condition in which the kneecaps can pop out of place, causing lameness and gait difficulties. These Chinese dog breeds may be allergic to certain fabrics or materials that could cause rashes or irritation of the skin. It is a good idea to ask a breeder if they’ve screened for any genetic diseases before making your purchase. To sum up the breed’s most common health issues:

The Chinese crested dog is a gentle, good-natured, and affectionate breed that will bond deeply with its owner. No matter your living situation, the dog’s intelligent and adaptable personality makes it very alert and attentive to its owner and surroundings. This is a very versatile breed, ideal for training and teaching tricks.

However, due to the dog’s rather sensitive nature, you should not be harsh or overbearing with it. A tender and patient attitude is most likely to yield results. As long as you are attentive to the dog’s personal desire for companionship, you should have few problems.

How to Take Care of a Chinese Crested Dog

Pet owners should be aware of the time and effort required to take care of this breed. Although not quite as high maintenance as some dog breeds, the Chinese crested dog does have its own unique challenges, including its sensitive skin. It is a good idea to have your puppy screened by the breeder or later at the vet for early signs of health problems.

The Chinese crested dog should be fed a high-quality diet to supports a moderately active lifestyle. It is also a good idea to hand out occasional treats to encourage its training. However, you should carefully monitor its calorie intake, because this breed is prone to weight gain.

If it seems like your dog is gaining weight, then you should think about cutting back on calories or purchasing leaner food to compensate. You should avoid cooked bones and high-fat foods altogether. Table scraps and human food should not be given on a regular basis.

The Chinese crested dog has its own particular grooming challenges. Obviously, the hairless variety requires comparatively little grooming and maintenance, but because the skin is so sensitive, it is a good idea to apply lotion as needed to stop or prevent dry or chafing skin. You should also apply sunscreen whenever you take the dog out in the sun. Because of its minimal shedding, this is a good hypoallergenic dog.

The powderpuff variation is a little different. It has a longer overcoat and a shorter undercoat, which makes it easier to brush than your typical dog breed, but the coat is also prone to matting. You should brush this dog on a regular basis.

The Chinese crested dog is a very intelligence breed and receptive to training. The ease with which it follows commands and the affection it has for its owner should make training a relative breeze, especially if given from a younger age.

Because of the dog’s sensitive nature, however, your training should be as gentle and patient as possible. If you raise your voice in anger or make aggressive gestures, then it could backfire by making the dog even less receptive to your commands. It could even strain or break the bonds of loyalty and affection with your dog.

The Chinese crested dog requires only a moderate amount of exercise and play time every day. Short brisk walks should suffice to release some of its excess energy. It’s also a good idea to have toys or balls on hand. When walking outdoors during the warmer months, you should make sure that the dog receives an adequate amount of water and (due to the dog’s exposed skin) some sunscreen. During the colder months, you should strive to keep it adequately warm and protected from the conditions. This breed is athletic enough to take part in some agility and sports competitions for smaller dogs as well.

The Chinese crested dog doesn’t have too many extra issue as a puppy, but you should make sure it is up to date on shots and health screening as soon as possible. If you’re interested in the powderpuff dog, then it should become apparently shortly after birth whether the dog will grow hair around its body. This breed is easily integrated into the home if it’s socialized and trained as a puppy.

The Chinese crested dog is considered to be a good family pet that gets along very well with children. It is friendly, loyal, and not easily prone to aggression or anger. However, there is one very important factor to keep in mind. Because of its small stature and exposed skin, this breed may not appreciate too much rough-housing, tugging, or aggressive play. The dog should be introduced gradually to the children and monitored carefully to make sure they are getting along well together. If the dog seems uncomfortable, anxious, or scared, then it is a good idea to intervene immediately.

If you are a fan of the Chinese crested dog, then you might want to look into these small or hairless breeds:

According to madpaws.com, these are the most popular general dog names:

Although not among the most popular breeds, the Chinese crested dog has appeared in several notable pieces of fictional cinema.

What is a Chinese crested dog?

It is a small toy dog with a very distinctive hairless appearance. Few other breeds are quite as unique.

Why do Chinese crested dogs have no hair?

The Chinese crested dog was bred over time for this appearance. This is due to the fact that it has a hairless dominant gene and a hairy recessive gene. If it inherits two recessive genes, then the dog will have a stronger coat of hair. Otherwise, it is mostly hairless. The Chinese crested dog is certainly not an ugly dog. Many owners find their appearance appealing. But amusingly, this breed has won the somewhat unserious World’s Ugliest Dog competition more than any other breed. As the name suggests, the World’s Ugliest Dog selects a winner from among the “ugly dogs” entered by their owners.

How much is a Chinese crested dog worth?

By choosing to adopt a Chinese crested dog, it is possible to purchase one for $300 or less. The cost from a breeder is much more expensive. This could easily run over $1,000.

The Chinese crested dog has many desirable traits. It is a medium maintenance breed that will remain loyal and affectionate to its owner, and for a smaller dog, it has a good overall temperament. This breed does not quite excel at any feats or particular tasks to the degree of more athletic breeds, so keep that in mind as you make your purchasing decision.

How long does a Chinese crested dog live?

The Chinese crested dog tends to live 12 to 14 years, but in rare cases, it can survive up to 18 years of age.

Chinese Crested Dogs are Omnivores, meaning they eat both plants and other animals.

What Kingdom do Chinese Crested Dogs belong to?

What class do Chinese Crested Dogs belong to?

What phylum to Chinese Crested Dogs belong to?

What family do Chinese Crested Dogs belong to?

What order do Chinese Crested Dogs belong to?

What genus do Chinese Crested Dogs belong to?

What type of covering do Chinese Crested Dogs have?

What is an interesting fact about Chinese Crested Dogs?

Chinese Crested Dogs are a hairless breed of dog!

What is the scientific name for the Chinese Crested Dog?

The scientific name for the Chinese Crested Dog is Canis lupus.