Bluebirds drop straight down on their prey from their perch, much like leopards.

Click through all of our Eastern Bluebird images in the gallery. 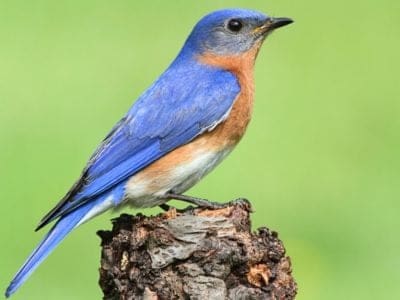 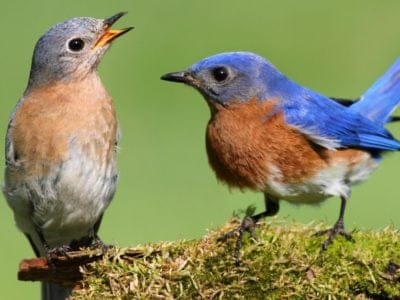 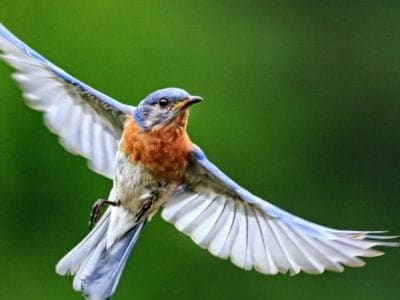 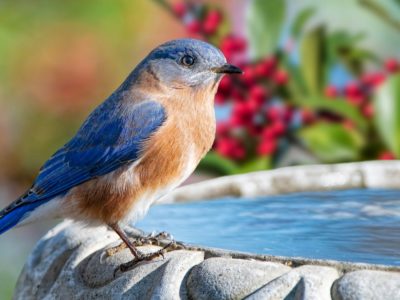 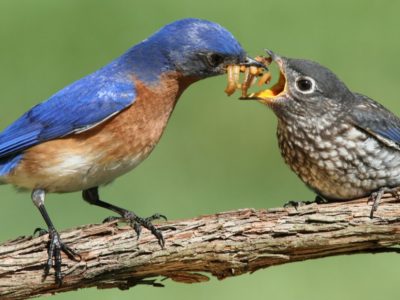 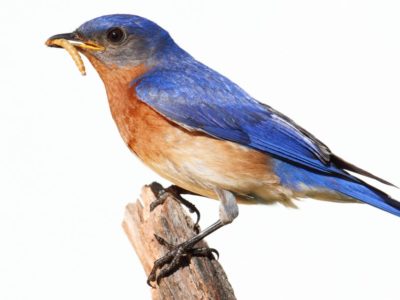 View all of the Eastern Bluebird images!

“The Eastern Bluebird is the only bluebird found east of the Rockies.”

These beautiful and beloved little birds are considered harbingers of spring and in some places, their song can be heard even when snow is still on the ground. Unlike so many other animals, their status is of least concern, and their numbers are actually increasing. This is largely due to the fact that bluebirds have no trouble living around human beings and won’t hesitate to build a nest in a house provided for them. They return the favor by eating insect pests.

Some facts about the Eastern bluebird are:

Where To Find Eastern Bluebird

The Eastern bluebird is a favorite of birdwatchers because it is conspicuous and generally easy to find. A birdwatcher has the best chance of finding an Eastern bluebird in the places where they live year-round. This would be in states found east of the Rockies below the 40th parallel, as far south as West Palm Beach Florida, and as far north as the Cape Cod Peninsula in Massachusetts. The bird can be seen perching on a fence, or a telephone wire or may show up as a flash of blue in the grass as it dives after a worm. If it’s the breeding season, the birdwatcher might catch a pair building a nest in a bluebird house, or in a cavity of a dead tree. The bird may even swoop by, singing. The birdwatcher may even see an enormous flock of bluebirds, heading somewhere.

People who live north of the 40th parallel can see the bluebird during the spring when it comes to breed. The birds can be found, again east of the Rockies and as far north as Yellowknife in the Northwest Territories and as far east as Nova Scotia.

The bluebird’s nest is cup-shaped, rather loose, and made of twigs, hair, feathers, or grass. Some ornithologists recommend people spread lint from the lint filter of their dryers outside so the bird can use it to build its nest.

The female does most of the work of building the nest, and the endeavor usually takes about 10 days. She will make the nest in a cavity made by a woodpecker or a house that’s been provided by a human. Bluebirds prefer their nest boxes to be between 2 and 50 feet off the ground.

The Eastern bluebird’s scientific name is Sialia sialis, which is Greek for “a type of bird.” There are seven subspecies:

The Eastern bluebird is about 7 inches long on average, with a 9.8 to 12.6 wingspan. The male has a back of pure, bright blue, a rusty breast, and a white belly. They have small beaks and short legs and weigh about an ounce. The female is a little larger, but her plumage is duller, and juveniles are brownish-gray with a bit of blue on the wings and tail. They have spots on their breast that disappear as they mature.

Eastern bluebirds tend to have a hunched look when they perch. The coloration of the juvenile and the female is probably protective and keeps them hidden from predators. Any blue in the plumage comes about when the light strikes proteins arranged a certain way in the feathers, for no bird can create blue pigment the way it can create red or yellow pigment.

Eastern bluebirds are gregarious save for the breeding season when a male claims a one or two-acre territory and defends it. He’ll also defend a feeding territory during the winter. Other than that, bluebirds can form huge flocks. The birds are monogamous during the breeding season unless they’re not. It has been shown that some birds have chicks by more than one mate at a time.

Ornithologists believe that about 68 percent of the bluebird’s diet is made up of insects and other small invertebrates such as snails and grubs. Many of these animals are harmful to plants, so the bluebird’s diet is beneficial to humans. During the colder months when animal protein is scarce, the bluebird will subsist on berries found in the woods. This includes the berries of honeysuckle, which are poisonous to humans. Vegetation sprayed with pesticides are detrimental to bluebirds and was one reason their numbers declined during the middle years of the 20th century.

Bluebirds get their water from ponds and streams and also drink from and bathe in birdbaths. Since they prefer running water to still water, a human might install a device to agitate the water in the birdbath.

The Eastern bluebird has to cope with a great many predators and threats. Chipmunks, raccoons, and flying squirrels, snakes, and cats steal eggs and nestlings. Aggressive sparrows and starlings chase them out of a territory. Fire ants sting nestlings to death then devour them. Birds of prey such as kestrels, hawks, and owls make meals of both adults and young.

Sometimes a migratory bluebird returns to its southern home too early in the season and may freeze to death or starve. Though the Eastern bluebird is long-lived for a little bird, most birds don’t live past their first year. Humans need to make sure that feeders and baths are kept clean, for birds can pass such diseases as salmonella, avian pox, and trichomoniasis among each other. Eastern bluebirds can also be plagued by parasites such as lice and blowflies.

Eastern bluebirds breed in the spring and summer and usually raise two or maybe three broods a year. The male picks a spot to build a nest and advertises it by flapping his wings and tossing a few twigs into the cavity. After mating, the female builds the nest then lays from three to seven light blue eggs. She lays one egg a day, then incubates them. They hatch in about two weeks. The chicks are helpless and fed by both parents. At first, they’re given soft-bodied food such as earthworms, but as they grow bigger and stronger the parents may bring beetles. The chicks are ready to fly the nest after 15 to 20 days and are ready to breed by next summer. The eastern bluebird’s lifespan is between six and 10 years, and the oldest known Eastern bluebird lived for 10 years and five months.

Biologists believe that the Eastern bluebird population is around 20 million birds. They are not considered endangered and their numbers have recovered nicely in most areas.

Does the Eastern bluebird migrate?

Some populations migrate, while others stay in an area year-round and only migrate when food is hard to find.

How many eggs does the Eastern bluebird lay?

The Eastern bluebird lays between three to seven eggs per brood.

How fast does the Eastern bluebird fly?

It’s been clocked at 17 miles per hour.

What is the Eastern bluebird’s wingspan?

When do Eastern bluebirds leave the nest?

Eastern bluebird fledglings leave the nest when they’re between 15 and 20 days old.

What color are Eastern bluebird eggs?

Eastern bluebird eggs are light blue. Rarely, they are white.

Some people think the song of an Eastern bluebird sounds like, “purity purity purity,” or “truly truly truly.” The song is described as bright, bubbly, and cheerful.

What does it mean when you see an Eastern bluebird?

It means that spring is coming!

Where do Eastern bluebirds live?

Eastern bluebirds live in North and Central America, east of the Rocky Mountains.

What eats the Eastern bluebird?

Among the many things that eat Eastern bluebirds are: