The flounder lies motionless on the ground to ambush prey!

Click through all of our Flounder images in the gallery. 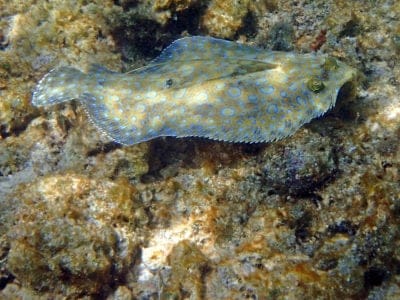 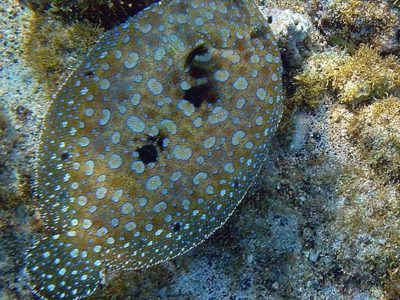 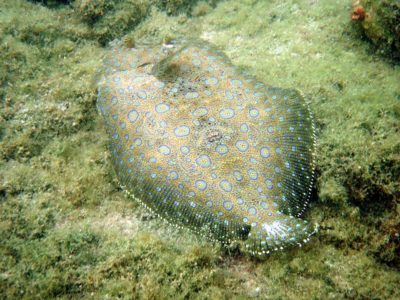 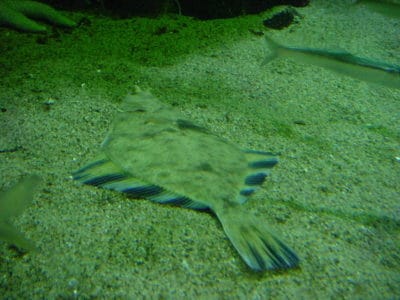 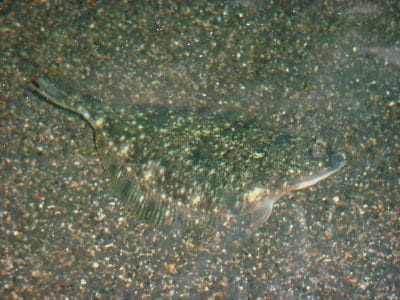 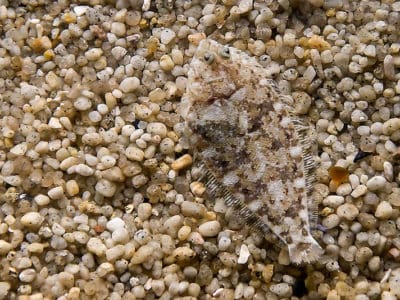 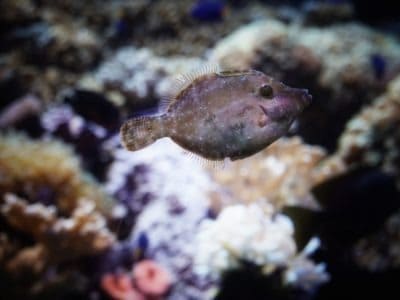 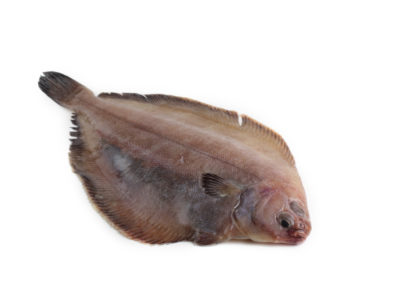 View all of the Flounder images!

With its remarkably thin body, the flounder truly lives up to the name of flatfish.

Lying almost motionless along the sandy ocean or seafloor, the flounder fish waits patiently for a tasty meal to come by so it can feed. Its entire lifestyle and physical appearance are oriented around the bottom-dwelling habitat. This is an incredible display of evolutionary ingenuity. But due to its popularity as a cuisine, some species of flounder are in danger of population depletion.

The term flounder is not a true scientific name. This has often inspired quite a lot of confusion among people. Instead, it refers to many different species of flatfish that are part of four distinct families: Achiropsettidae, Pleuronectidae, Paralichthyidae, and Bothidae. All of these families are classified within the order Pleuronectiformes. However, not every member of this order is a flounder, because it also includes the dabs, brills, soles, and others. Together these creatures belong to the class of ray-finned fish known as the Actinopterygii.

The flounder has an unusually flat appearance that’s well-suited for its bottom-dwelling lifestyle. To see everything above it, the flounder has two big round eyes projected from small stalks on the same side of the head. These eyes also have the ability to move independently of each other. The typical flounder specimen measures somewhere between five and 25 inches in length (the larger ever recorded was some 37 inches) and up to 22 pounds in weight. This doesn’t quite capture its true size, however, since the flounder has a massive surface area thanks to its round or oval body.

The flounder’s scales act as camouflage that makes it difficult for both predators and prey to detect it against the muddy or sandy ocean bottom. Some species can actively change their color to blend in with the seabed. This has the dual purpose of also signaling the emotional state of the fish. For instance, a pale color may be a sign that the creature feels threatened. The flounder comes in a huge range of different colors and patterns, depending on the composition of the sediment in which it resides. The slate of orange, brown, green, white, or tan colors is normal.

The flounder dwells at the bottom of oceans and seas near docks, bridges, and coral reefs. Its main areas of occupancy include the tropical and temperate waters along the coasts of Europe, North America, Africa, and Asia. Some species also reside much farther north near the Arctic.

It is estimated that some 30 million flounders are still alive across the entire world’s ocean, but pollution, habitat change, and overfishing in the 20th and 21st century have depleted some stocks. For many species of flounder, there is not enough data to fully estimate their conservation status. But when data is known, the vast majority of species appear to be in good health. The conservation tracker IUCN Red List believes that they are of least concern. However, the continued depletion of fish stocks may threaten many species in the future.

In the United States, the National Oceanic and Atmospheric Administration is the main governmental body in charge of carefully managing flounder numbers. The administration uses scientific data to determine how much of the flounder population can be harvested for the following year, and then it allocates resources accordingly between commercial and recreational catches to ensure that enough stocks are present to repopulate the waters.

The flounder is primarily a nocturnal carnivore that thrives on a diet of shrimp, crabs, and other fish. Smaller species may consume worms and plankton as well. The exact composition of the diet varies quite a bit by location and species. The flounder is an ambush predator that lies motionless on the ocean or sea floor, blending in with the environmental surroundings, and then quickly snaps up the unsuspecting prey with its sharp teeth.

Because of its relatively large size, the flounder has only a few natural predators such as sharks, eels, and humans. Camouflage offers the best means of protection. When exposed, however, it is very vulnerable to larger predators due to the lack of other natural defenses.

The flounder’s breeding season usually takes place during the warmer months. The females will release more than 100,000 (and sometimes millions of) eggs from her body, and the male will release his sperm to fertilize them. After a few weeks, the young fry will hatch from the eggs. The spawning is usually timed perfectly with the most productive and bountiful season of the year for food.

At birth, the flounder actually looks like a typical fish. It is born with a standard symmetrical appearance with eyes located on both side of its head and also swims around the ocean like a fish. After a few days of this, the flounder undergoes significant physical changes in which the body begins to flatten out, the swimming bladder (which provides buoyancy) disappears, and one eye begins to migrate to the other side of the fish. Once it has fully developed, the flounder tends to live some three to 10 years in the wild.

Flounder in Fishing and Cooking

Captured for both recreational and commercial purposes, the flounder is one of the most popular deep-sea fishes to eat around the world. It is especially common fried, broiled, or grilled, but it is cooked in so many different ways and served with so many different foods that the variety is truly staggering. The mild taste goes along well with all kinds of sauces, herbs, spices, vegetables, and cheeses.

What eats the flounder?

The flounder is a very common prey item for sharks, eels, and humans.

Where do flounder live?

Is the flounder a good fish to eat?

The flounder are known to contain lean, high-quality meat with low-fat content (except for healthy omega-3 fats) and high protein content. Studies suggest that it may help lower the risk of heart disease.

The flounder has a sweet but subtle taste that’s complemented by a flaky and crumbling texture. It is commonly broiled or grilled.

What is the difference between halibut and flounder?

The difference between a flounder and halibut is a source of confusion for many people. Simply put, the halibut is a member of the flatfish family Pleuronectidae. This actually makes it one of the types of flounder. But compared to the average flounder species, the halibut is larger in size and lives farther north as far as Alaska.

Are Flounders herbivores, carnivores, or omnivores?

Flounders are Carnivores, meaning they eat other animals.

What Kingdom do Flounders belong to?

Flounders belong to the Kingdom Animalia.

What class do Flounders belong to?

Flounders belong to the class Actinopterygii.

What phylum to Flounders belong to?

Flounders belong to the phylum Chordata.

What family do Flounders belong to?

Flounders belong to the family Paralichthyidae.

What order do Flounder belong to?

Flounder belong to the order Pleuronectiformes.

What genus do Flounders belong to?

Flounders belong to the genus Paralichthys.

What type of covering do Flounder have?

Flounder are covered in Scales.

What is an interesting fact about Flounders?

Flounders are a flat fish found in the Atlantic and Pacific!

What is the scientific name for the Flounder?

The scientific name for the Flounder is Paralichthys.

What is a distinguishing feature of the Flounder?

What is the lifespan of a Flounder?

Flounders can live for 3 to 10 years on average.

What is the biggest threat to the Flounder?

The biggest threat to the Flounder is overfishing.

What is the optimal pH for a Flounder?

What is another name for the Flounder?

The Flounder is also called the flatfish.

How many Flounders are left in the world?

There are around 30 million Flounders left in the world.

How do Flounders have babies?