Can glide in the air for hundreds of feet

Click through all of our Flying Fish images in the gallery. 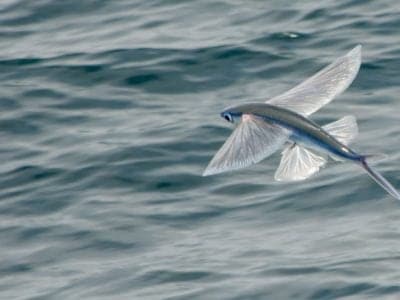 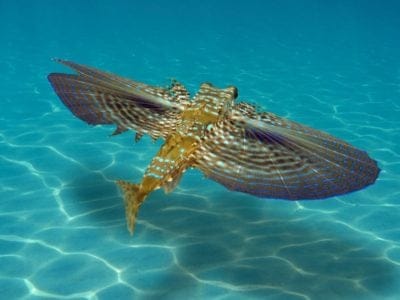 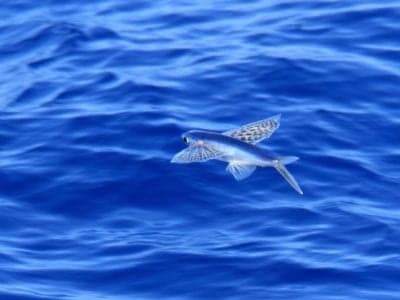 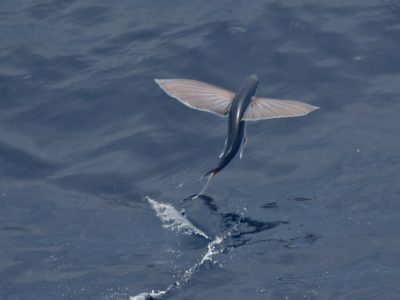 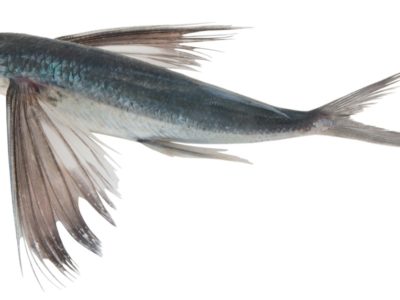 View all of the Flying Fish images!

The flying fish, also known as a flying cod, is a family of ray fin marine fish, common to warm, tropical waters throughout the world’s ocean.

It has a remarkable ability that sets it apart from any other fish in the world: their pectoral fins are highly modified “wings” that enable them to leap out of the water and glide above the surface for up to 650 feet (and potentially twice that length with a good gust of wind). They travel together through the oceans in large schools. When they encounter a predator, the wings help them make a hasty escape. Some flying fish have been recorded performing 12 consecutive flights. This family of fish is quite abundant around the world; very few species are endangered.

The scientific name for the family of ray fin flying fish is Exocoetidae. This is a combination of two Latin words that roughly translate to “sleeping outside.” The name is based on a misconception from early sailors that these fish returned to the shore at night to sleep. These fish belong to the order of Beloniformes, along with needlefish and ricefish.

The family of flying fishes is composed of approximately 40 species spread out across seven or so genera. Here’s a short list of just a few of them.

The flying fish looks a bit like a sardine (though not really like a cod). It has a long, torpedo-shaped body, blue or silvery scales, and a vertically forked tail. By far the most prominent features are the wing-shaped pectoral fins near the head that enable them to glide through the air. Some species also have a second set of “wings” that are really just modified pelvic fins. The medium-sized fish can measure anywhere between 6 and 20 inches in length but never exceed 2 pounds in size.

These fish are found all throughout the world’s three major oceans (the Atlantic, Pacific, and Indian), up to a depth of around 650 feet. Most species tend to concentrate in tropical and subtropical waters. They are very rare up north because colder temperatures appear to impede the muscular function necessary to glide through the air.

They are so common around the Caribbean that the flying fish is actually the national symbol of Barbados. Although they’re sometimes popular in the commercial fishing industry, population numbers appear to be quite high and stable. Almost all species are classified by the IUCN Red List as least concern. Very few are endangered.

These fish are an integral part of the food chain in many tropical marine environments around the world. They acquire nutrients from smaller prey and provide nutrients to larger predators farther up the food chain.

What eats the flying fish?

These fish are preyed upon by marlins, tuna, squid, porpoises, birds, and humans.

What does the flying fish eat?

These fish are omnivores. The bulk of its diet consists of plankton, but it also sometimes consumes small crustaceans and fish.

These fish will congregate by the millions each year for the spawning season. This occurs near the surface of the open ocean. The female will release hundreds of eggs into the water for the male to fertilize (these eggs can be eaten by people as edible roe). She will then attach her fertilized eggs via a sticky filament to a piece of seaweed or floating debris.

After a few days, the fish are born with whiskers near their mouths to help them blend in among the plants. From the moment of their birth, they are largely on their own, and many will end up perishing from predators. They gain the ability to fly after reaching about 2 inches in length. The average lifespan of these fish is approximately five years.

Flying Fish in Fishing and Cooking

These fish are considered to be quite an edible meal. It is commercially caught on a large scale throughout the entire Asia Pacific region and parts of the Caribbean. The most common methods of fishing are gillnetting (vertical nets that hang from a line) or dipnetting (a large scoop held in place by a hoop).

The fish are fried, steamed, and even made into sushi. In Barbados, they are served with cou-cou, the national dish, which consists of cornmeal and okra. The roe (meaning the eggs) is also considered a delicacy in several countries. Many people claim that the flying fish has a firm, savory taste.

Where are flying fish found?

Flying fish are found in warm and sometimes temperate waters of the Atlantic, Pacific, and Indian Oceans.

What does a flying fish eat?

Where do flying fish live?

Flying fish live in the open ocean and sometimes near coral reefs close to the surface.

What is a flying fish?

The flying fish is a family of marine animals with wing-shaped fins that enable them to glide briefly above the surface of the water. This behavior is so peculiar that no other type of fish can claim to have it. Otherwise, they look and behave similarly to conventional fish. They are quite abundant, and very few species are endangered.

Flying fish cannot flap their wings like birds to gain altitude. Instead, they use their momentum in the water to launch in the air and then glide over distances of hundreds of feet.

How long can flying fish stay out of water?

The longest amount of time a flying fish was ever recorded in flight was about 45 seconds. They cannot breathe the air, so their ability to glide is necessarily limited.

Why do flying fish exist?

The gliding ability is an adaptation that probably evolved to help the fish escape ocean predators. However, this also came with a small downside: it made them more vulnerable to birds.

The flying fish is supposed to have a firm, savory taste. The roe is also quite edible.