The second pair of upper incisors in a flying lemur has a double root, which is unique for mammals.

Click through all of our Flying Lemur images in the gallery. 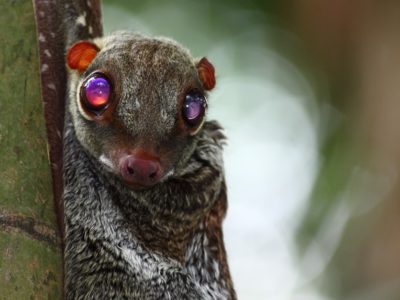 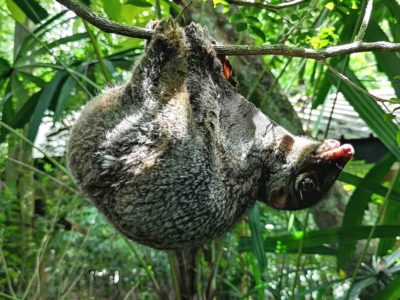 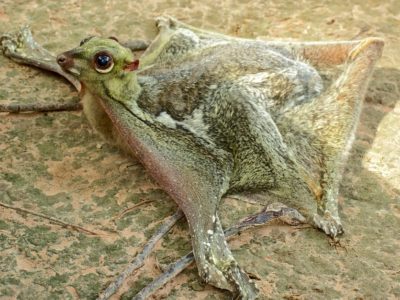 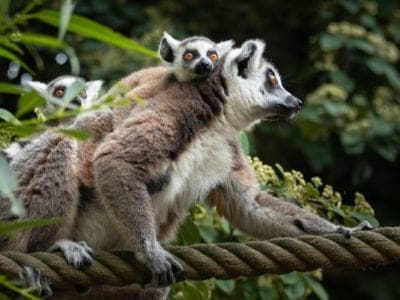 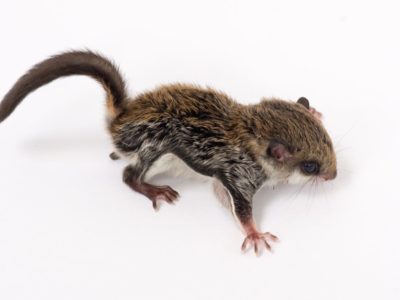 View all of the Flying Lemur images!

The Flying Lemur is not a lemur, and it can’t fly!

Of all the gliding mammals, which including flying squirrels and flying possums, flying lemurs are the most adept. This is because of their patagium, a membrane covered with fur that acts much like a parasail as they glide from one tree to the other. This membrane is connected to the animal’s face, all four of its paws, and its tail. Flying lemurs are elusive, live in the treetops, and are most active at night.

Some facts about the flying lemur are:

So far, there are two species of flying lemur. The scientific name of the Sunda flying lemur is Galeopterus variegates, and the scientific name of the Philippine flying lemur or kagwang is Cynocephalus volans. Though the “Galeo” part of Galeopterus is uncertain, “pterus” means wing, and variegates is Latin for variegated, which refers to the colors of the animal’s fur. Cynocephalus means dog-headed from the Greek, and volans is Latin for flying, so its name translates to “flying, dog-headed animal.” The order the animals belong to, Dermoptera, means “skin-wing.”

The Sunda flying lemur has a large and dwarf form. The former is found on the Sunda Shelf, while the dwarf is found in central Laos and the islands near it. There are four subspecies:

The kagwang is thought to be the only species in its genus so far, but some biologists believe that two other species exist. These are the Bornean and the Javan flying lemurs.

The Sunda lemur has a small head and ears and protuberant eyes that face forward like a primate’s. They have dense fur that is white or pale beneath and shades of white, red, black, or gray above. Its legs, which are all about the same size, are joined by the patagium. The animal’s feet are webbed and clawed. The fur may also have lichen-colored blotches that help camouflage the animal if it senses something dangerous in the area. When the Sunda flying lemur glides it can stretch its patagium to around 27.5 inches thanks to a muscle in its side.

Both species are nocturnal. They do not engage in swimming in the water, though they appear to be swimming beautifully through the air. They are nearly helpless on the ground, since they can’t stand up, and spend their entire lives in the trees.

This lemur’s day begins at night or just before the sun sets and ends just before the sun rises again. During this time they forage for food, gliding from one tree to the other in search of provender. To do this they’ll climb to the very top of a tree, launch into the air, and land on another tree trunk after a controlled glide that lasts for a few seconds. Then, they climb up to the top of that tree and repeat the process. Climbing for the colugo is a slow and awkward-looking process, as they seem to “hop” up the tree. On the other hand, both the Sunda and Philippine lemurs can easily glide more than 328 feet without stalling.

The colugo is mostly solitary and can be territorial. Some biologists estimate that the territory of a Sunda flying lemur is about two hectares. Sometimes a group can be seen in one tree, though they are careful to keep a certain distance from each other. During the day the colugo rests and shelters in a cavity in a tree.

The habitat of both species of these lemurs is the multi-storied tropical rainforest of Southeast Asia and Indochina. Though their habitat is being fractured due to agriculture and other human activity, the flying lemur has adapted well to the changes and can also be found on rubber and coconut plantations. Indeed, the kagwang has developed a trick of wrapping itself into a ball as it hangs from a coconut palm. When it does this, its brownish-gray fur makes it look like a coconut.

These lemurs have dangerous-looking teeth that are often seen in carnivores, but they are mostly herbivores. They eat young leaves, ripe fruit, flowers, and shoots. Sometimes they’ll eat insects and sometimes they’ll lick the bark of trees for minerals, water, and sap. Their digestive system is well developed to break down the fiber, tannins, and other materials in their diet.

The main threat and predator of these lemurs is the human. Humans cause habitat fragmentation and destruction and some humans hunt lemurs for food. The Philippine flying lemur is also preyed upon by the enormous and deadly Philippine eagle and other dangerous raptors.

When a flying lemur is confronted by a predator, it will either freeze in place and try to blend in with the foliage or it will simply glide away, swimming easily through the air to another tree and out of danger. But gliding is less useful if the predator is a human armed with a spear or a rifle.

Biologists are not sure about how these lemurs court and mate, but they do know that they mate throughout the year and that females can become pregnant again soon after they give birth. The Sunda flying is pregnant for 60 days, while the Philippine lemur is pregnant for about 105 days. Both usually give birth to only one infant at a time, though twins will be born from time to time.

Other facts that make these lemurs unusual: their babies are born in a very underdeveloped state, as with marsupials. They weigh only a little over an ounce and have just enough strength to cling to the fur of their mother’s belly. Instead of a pouch, the mother will wrap the baby in her patagium to keep it warm and safe.

The baby is fed from two teats found near its mother’s armpits. It is weaned when it’s about six months old and becomes sexually mature when it’s between two and three years old.

Biologists believe the lifespan of these lemurs is about 15 years, and it is ready to breed between the ages of two and three years.

What is a flying lemur?

A flying lemur is a small animal that lives in the rainforests of Southeast Asia. It is related to primates and is known for its ability to make controlled glides between the trees. Other unusual facts about the flying lemur are that it has teeth shaped like tiny combs, no blood vessels in its retinas and its babies are born very underdeveloped like the babies of marsupials.

Why do sunda flying lemurs have tails?

Sunda flying lemurs have tails in order to maintain their balance as they glide through and between the trees.

What is a flying lemur called?

A flying lemur has several names, including flying cat, kagwang, colugo, and cobego. However, it is not a lemur, and it doesn’t really fly.

Is a colugo a bat?

The colugo is not a bat and is not related to a bat. A colugo or flying lemur doesn’t actually fly like a bat does but glides from place to place. The bat is the only mammal that can achieve true flight.

A flying lemur has a strong bite that it uses to chew the leaves and other vegetation that it eats. It is quite possible that it can bite a human if it feels threatened, though the data on that is scarce.

Can a flying lemur swim?

A flying lemur cannot swim. It can barely walk on land and is a slow climber. It lives nearly exclusively in the trees.

How long does a flying lemur live?

The lifespan of a flying lemur appears to be about 15 years, and the longest-lived captive flying lemur lived for 17.5 years.

Can a flying lemur be a pet?

A flying lemur should not be kept as a pet. These animals are adapted to living in the treetops in tropical rainforests. They also have a specialized diet that would be hard for an ordinary person to replicate. Since they are able to glide hundreds of feet at a time, they require the type of space that most people can’t provide. So, no, the colugo should not be kept as a pet.