The German Sheppit is well-suited for guarding and police work.

Click through all of our German Sheppit images in the gallery. 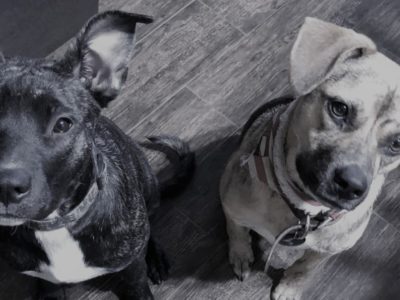 View all of the German Sheppit images!

The German Sheppit is a first-generation hybrid between two different breeds of dogs: a German Shepherd and a Pit Bull. The German Shepherd is a big herding dog that excels at many different tasks, including police work, search and rescue, and home protection. The Pit Bull, by contrast, is a group of several different breeds, including the American Pit Bull Terrier, the American Staffordshire Terrier, and the Bull Terrier, all united by a muscular, short-haired appearance.

As a result of this breeding, the German Sheppit can have a wide variety of different appearances and temperaments. This dog is more likely to look like a Pit Bull than its German Shepherd parent, including a large head, a shorter muzzle, and folded ears. The coat will be a mix between two or more of the following colors: black, white, tan, fawn, and grey, as well as brindle. Temperamentally, the German Sheppit is likely to be loyal and protective, but it may mix different characteristics in unusual and unexpected ways.

3 pros and cons of owning a German Sheppit

Depending on the size of its Pit Bull parents, the German Sheppit can be a medium or large dog. It also tends to have a very muscular frame.

The German Sheppit will almost certainly inherit some health problems from both of its parent breeds. This may include allergies, skin problems, heart disease, progressive retinal atrophy, epilepsy, bladder stones, cancer, bloating, patellar luxation (essentially, a chronically loose kneecap), or hypothyroidism (the signs of which are lethargy and weight gain). Another potential problem you should look out for is a bleeding disorder called Von Willebrand’s disease, caused by low levels of clotting protein.

A good breeder will try to reduce or eliminate the risks of many conditions, but there is always the chance that some problem will arise. That is why you should schedule regular checkups at the vet for tests and an examination. If everything goes well with its health, then the German Sheppit should have an average lifespan of around 10 to 12 years. In summation, these are the most common health problems:

The Pit Bull (and to a lesser extent, the German Shepherd) has a poor reputation as an aggressive and dangerous breed, but this is somewhat unfair. As long as it’s well-trained and properly socialized as a puppy, your dog should have very few behavior problems and exhibit no aggression around people. In fact, these dogs have many positive qualities. With their hard-working, fiercely loyal, intelligent, and people-oriented personality, they can make excellent police dogs, guard dogs, or watchdogs. But in order to remain happy and content, this dog will require plenty of attention and care from its owner. If ignored or left alone, then it may resort to destructive behavior and other unwanted traits.

Health and Entertainment for your German Sheppit

How to Take Care of the German Sheppit

The German Sheppit is by no means an easy hybrid dog to care for. Its exercise, diet, and social needs are quite high. Since it will demand so much of its owner’s time and attention, this is probably not a good choice for novice or first-time dog owners. If you have any other questions or concerns about how to raise your dog, then you should consult with your vet.

A full-grown German Sheppit probably needs around 3 to 4 cups of high-quality dry food designed for active dogs every single day. If your dog suffers from bloating (a very serious condition that can cause the stomach to expand rapidly), then it’s not a good idea to leave out all of the food at once. Instead, you should divide up its daily diet into several meals per day and stick to a regular schedule that the dog will anticipate and understand.

Despite its short hair, the German Sheppit is actually quite a heavy shedder and you may need to buy a special vacuum just to clean it up. This dog will probably need to be groomed at least three times a week with a hard bristle brush. Since the dog’s natural oils should serve to keep the coat clean, you will only need to bathe your dog about once a month or whenever it becomes particularly dirty. Use a mild shampoo to prevent skin irritation. Proper dental hygiene can be maintained by brushing the teeth at least three times a week to prevent bad breath and disease. Check the ears and clean them out with cotton at least once a week to prevent obstructions and infections. Finally, you should trim the nails before they become long and unwieldy.

The German Sheppit should undergo rigorous obedient training and socialization so it will learn how to properly interact with people and other dogs. It does have the tendency to take charge and boss everyone around, so owners will need to demonstrate that they’re the leader. Positive reinforcement methods and rewards work best for this type of dog, but you should also not let it get away with disobedient behavior. If you are struggling to train it, then you might want to contact a professional trainer in your area.

The German Sheppit is a very energetic dog that needs around 60 to 90 minutes of exercise per day, preferably in the form of long walks, runs, hiking, and free-roaming in a park or yard. It also needs additional activity time like toys, ball games, or simple tasks throughout the day. Without enough exercise, this dog may become anxious and destructive.

In order to become a well-behaved full-grown adult, German Sheppit puppies need to begin obedience training, house training, and proper socialization within the first few months of life. Many owners of the German Sheppit may want to out-crate training as well. Not only does it provide puppies with a safe space, but it also assists with house training; the dog will not want to release its bladder or bowels as long as it remains in the crate. But owners should try to treat the creation like a second home and not a cage or prison.

Despite their reputation for aggressive behavior, a properly socialized German Sheppit should be very kind and protective around children. But just as your dog needs to understand how to socialize with children, it is important to teach smaller kids in particular how to behave around a larger dog. The German Sheppit needs to be treated as a proper member of the family with a mind of its own and not just a toy or plaything.

Dogs Similar to the German Sheppit

The German Sheppit doesn’t yet have a large enough following in the United States, but its two parent breeds are quite popular. In fact, the German Shepherd is one of the top five most common breeds in the US.

Popular Names for the German Sheppit

If you are still struggling to find a good German Sheppit name, then you might want to consider the following options:

What is a German Sheppit?

The German Sheppit is a crossbreed mix between a German Shepherd and a Pit Bull. This is a loyal, protective, and intelligent dog whose most common physical characteristics include short but dense fur, a muscular body, a small muzzle, and folded ears. Coat colors include black, white, fawn, tan, grey, and even brindle.

What is the lifespan of a German Sheppit?

The average lifespan of the German Sheppit is around 10 to 12 years.

How big does a German Sheppit get?

A full-grown German Sheppit is usually no larger than 26 inches at the shoulders and weighs up to 90 pounds.

That depends on what traits you find appealing in a dog. Despite the parents’ reputation as aggressive dogs, a properly trained German Sheppit should be generally friendly, loyal, and protective. Their hard-working behavior and strong motor make them well-suited for use as a service dog or watchdog.

How much does a German Shepherd Pitbull crossbreed cost?

The price of a new German Sheppit is generally between $200 and $1,000 on average. For a dog with a particularly strong heritage, the price will obviously be a lot higher. But most dogs from a reputable breeder should cost somewhere within the average range. If price is a concern, then you might want to consider adopting a dog from a rescue or shelter (though it may be a bit challenging to find a German Sheppit at random in a shelter).