Click through all of our Green Tree Frog images in the gallery. 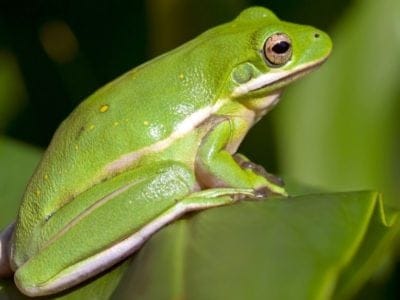 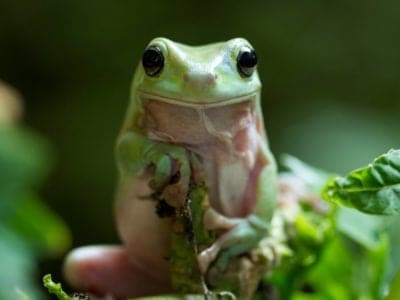 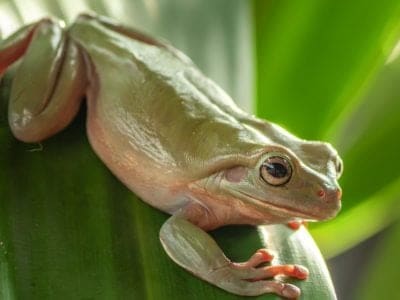 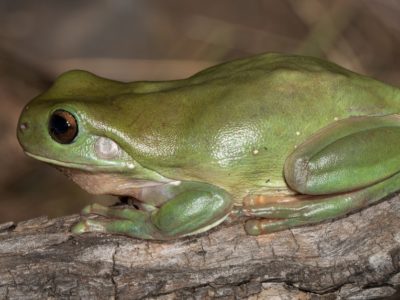 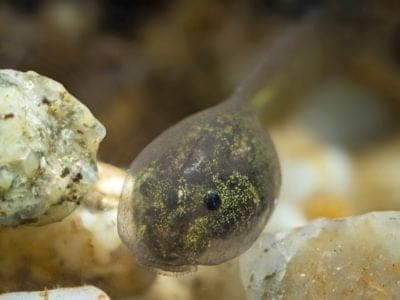 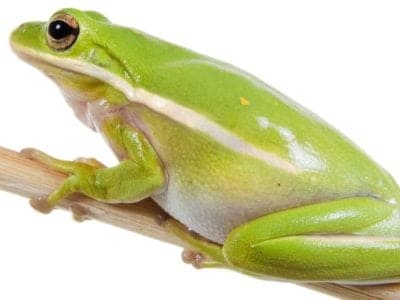 View all of the Green Tree Frog images!

American green tree frogs are the official state amphibian of Louisiana and Georgia.

The Oz native’s scientific name is Litoria caerulea. “Litoria” is the name given to the genus of tree frogs native to Australia and nearby locations such as New Guinea, the Bismarck Archipelago, and the Solomon Islands. While species in this genus vary widely in appearance, they all share unpigmented eyelids and horizontal irises. “Caerula” is Latin for “blue” and refers to the fact that this frog owes its striking emerald coloration to blue pigments that overlie a base coat of yellow.

The American native’s scientific name is Hyla cinerea. “Hyla” is the name of a genus in the tree frog family “Hylidae” and was inspired by the mythological hero Hylas, a companion of Heracles; “Cinereus,” which is Latin for grey, refers to the olive tinge of this amphibian’s skin.

Both species have a chameleon-like ability to change color, depending upon temperature, lighting conditions, and the animals’ general surroundings. Much of the time, the Australian animal is a bright jade green while the American animal is a less vivid, greyer green. These colors reflect the hues of the leaves and other vegetation where the animal typically lives.

The Australian frog is larger than its American counterpart. Its belly is white; its limbs are short and strong and end in digits that are specialized for sticking to surfaces like trees. During mating season, males grow a black pad on their proximal digit so that they can better grasp the female during amplexus. Beneath its throat, the Australian native has a large vocal sac that’s grey in males and white in females. When fully grown, females are slightly larger than males.

The limbs of the American green tree frog end in long, thin digits tipped with sticky spatulate pads. While the Oz native almost appears to grasp the branch upon which it is sticking, the American native merely sticks to it.
The green tree frog found in the U.S. also has a white or cream-colored lateral stripe running from its jaw to its groin.

Frogs are social animals that live in groups. A group of frogs is called either an army or a chorus. The latter designation reflects the fact that these little amphibians are enthusiastic vocalizers, especially after a rain shower. Their distinctive croaks play an important role in their mating rituals but also serve as a warning when a predator grows too near. Both of these frog species are largely nocturnal. During the day, they like to tunnel into cooler, moister, darker areas from which they emerge as the sun sets, ready to feed and croak.

Both of these frog species are popular terrarium pets. While the Australian green tree frog is a brash little fellow with relatively little fear of humans, its American counterpart is timid and does not tolerate frequent handling.

Australian green tree frogs are found in a variety of habitats that range from relatively dry eucalyptus stands in the northwest parts of Australia to the more tropical forests of New Guinea. Though frogs have lungs, much of their oxygen exchange occurs through skin absorption, so their skin must remain moist. Some scientists speculate that the Australian species has a bioregulation mechanism that actually allows it to control the amount of water that evaporates through its skin. Thus, it is able to thrive in seasonally dry and wet habitats. Australian frogs also appear to have some kind of homing ability that allows them to return to the spot they were captured from even if they were released a fair distance away.

American frogs are most frequently found in trees near lakes, marshes, and streams. Their geographic distribution ranges as far north as Delaware, as far south as the Florida Keys, and as far west as Texas. They are especially abundant in the Piedmont and coastal plains of North Carolina.

Both of these frog species are insectivores, feeding on flies, mosquitoes, crickets, locusts, moths, and other small insects. Frogs only have teeth on their upper jaws, and those teeth are designed not to masticate but to hold prey in place. Frogs’ tongues are very long, often one-third the length of their bodies. Typically, frogs stick their tongues out as bait, and once the prey is attracted, frogs retract their tongues, consuming their prey whole.

Australian frogs can grow fat from overeating. Hence, one of the species’ nicknames is “dumpy tree frog.”

Since the European settlement of Australia, dogs and cats have joined snakes and birds as frog predators. In general, though, these animals have few natural predators, which is reflected in the length of their lifespan: In captivity, it’s not uncommon for these animals to live more than 15 years.

Life is more perilous for the American frogs. Predators include snakes, birds, large fish, and even other species of frogs. These amphibians are among the only frog species that breed in bodies of water that are inhabited by predatory fish. As tadpoles, they can even become prey to aquatic insects such as waterbugs. Their lifespans are shorter than those of their counterparts in Australia; in captivity, they seldom live longer than five years.

Habitat destruction through drainage and wetland clearance is causing a decline in the size of these frog’s population in Australia, particularly throughout the Sydney bioregion. Its American counterpart continues to thrive throughout its geographic range, particularly in locales like Florida and North Carolina. However, amphibians are one of the animal groups on the planet that are at the highest risk of extinction from the activities of humans. Because part of their oxygen exchange takes place through their skin, green tree frogs (and other amphibians) are extremely sensitive to pollution and other environmental changes. Ecologists call species like this “indicator species;” their dwindling numbers may be a sign that planetary conditions are worsening.

Snakes and birds eat adult green tree frogs. As tadpoles, these amphibians are eaten by birds, fish, insects, and other frogs.

What do green tree frogs eat?

Green tree frogs are insectivores. They feed on a diet of flies, mosquitoes, crickets, and other small insects.

Both of these frog species breed from the middle of March to September, most often following a rainstorm. Breeding cycles are influenced by temperature and precipitation in a manner that’s not fully understood, but breeding males tend to vocalize more as the temperature rises and the length of the day increases.

Mating takes place in water through amplexus: The male frog grasps the female tightly around the back so that their cloacal openings are in close proximity. Fertilization is external, however; the female expels her through the deposited sperm cloud. American frogs lay approximately 400 eggs while their Australian counterparts lay 150 to 300 eggs.

Australian green tree frog eggs take three days to hatch; American green tree frog eggs take two days longer. The resulting offspring are called tadpoles. For the first few weeks of their lives, tadpoles are water dwellers exclusively, and they look like primitive fish with tails, mouths, and rudimentary gill tracts. Then they begin to go through metamorphosis, which is an extraordinary series of physiological changes that prepare them for life on land. These frog populations in the U.S. typically complete metamorphosis within eight weeks; among the Australian animals, however, metamorphosis durations are much more variable, lasting between four and 12 weeks.

Neither of these frog species takes any interest in their offspring once the mating process is over.

In the United States, these frogs are found in wetlands across the southeastern part of the country and as far west as central Texas. They are common in Florida and North Carolina. They have even been observed in Hawaii although these animals most likely are descendants of terrarium escapees. Biologists do not have an estimate for the size of the American green tree frog population, but this animal is not on any endangered species list.

Australian green tree frogs are found throughout the northeast regions of the continent as well as in New Guinea. In suburban areas, these frogs are threatened by pollution and predator animals like dogs and cats introduced by European settlers. Outside these areas, their population numbers are stable. As native animals, Australian green tree frogs enjoy protected status under the stipulations of the federal Environment Protection and Biodiversity Conservation Act 1999.

Green tree frogs are insectivores, which makes them technically carnivores.

What do green tree frogs eat?

As you might expect, green tree frogs are green! There are many shades of green, however, and the Australian green tree frog typically has a brighter, more jewel-like hue than its American counterpart.

Can you touch a green tree frog?

American green tree frogs are timid creatures, and it’s best to avoid touching them. Their Australian counterparts are hardier, but too much handling can be dangerous to both you and the amphibian. Frogs commonly carry the salmonella bacteria in their intestinal tracts, and this bacteria can cause a severe intestinal illness in humans.

Frogs have extremely porous skin because they absorb oxygen through their skin. If you have the slightest residue of soap, oil or other chemicals on your hands, a frog can absorb this and become ill. Frogs are also extremely delicate, so touching or grasping one too hard may actually injure it.

Is a green tree frog poisonous?

All frogs secrete some amount of toxin; it’s one of their defense mechanisms. Green tree frogs secrete very low levels of toxins, however, with very little appreciable effect.

Both American green tree frogs and their Australian counterparts make excellent additions to any terrarium. Even an amphibian novice will find them extremely easy to care for. Climbing is essential for these animals, so you’ll want a terrarium that’s 10 gallons or larger so that there will be room for branches and live plants. Use substrates such as moss, cypress mulch and smooth gravel. Make sure to maintain a temperature of at least 70 degrees in the room where the animals are kept. Good care may also include misters and a humidifier since these animals will only thrive in a moist environment.