Less than 10% make it into adulthood

Click through all of our Grizzly Bear images in the gallery. 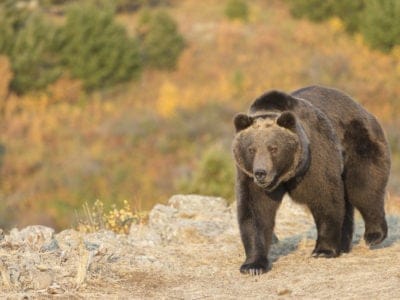 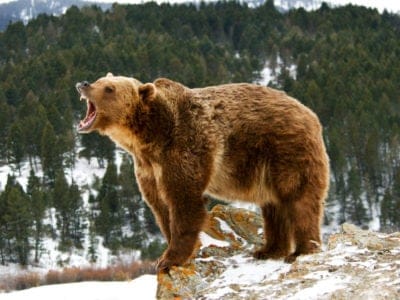 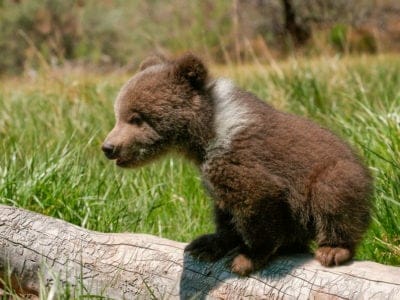 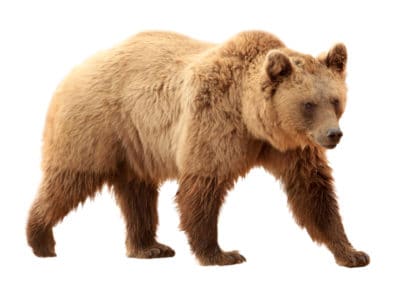 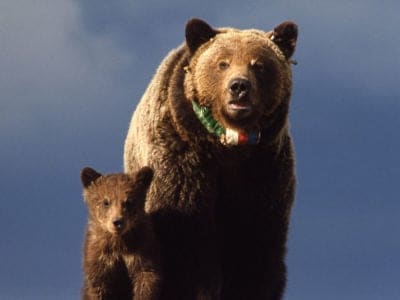 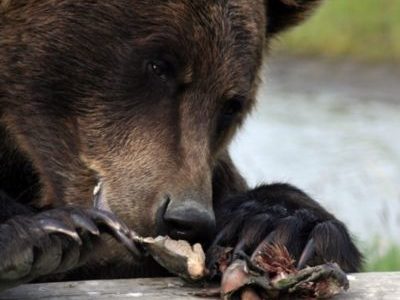 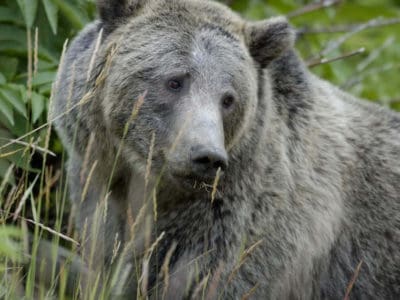 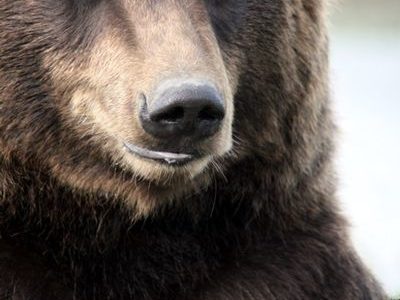 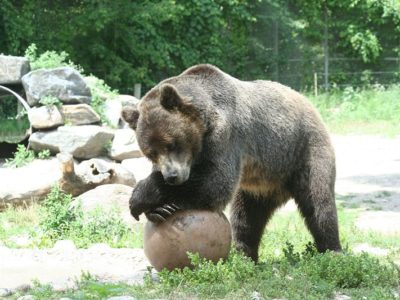 View all of the Grizzly Bear images!

The Grizzly bear is a type of brown bear that was once plentiful in the western and northwestern United States. The animal is also known as the North American Brown Bear. The name “grizzly” comes from the light tips on the bear’s fur, which gives it a grizzled or silvery appearance.

• Grizzly bears are a threatened species in the United States.

• The California grizzly bear is extinct.

• The grizzly-polar bear hybrid is a cross between a Polar bear and a grizzly bear.

The grizzly bear is a subspecies of the brown bear known as Ursus arctos. Ursus arctos horribilis is the scientific name for these bears. Ursus is Latin for bear, and Arctos comes from Arktos, which is Greek for the word bear. Horriblilis is a Latin term that means horrible.

Grizzly bears are animals that may be very light brown or dark brown. Grizzlies have large heads, dish-shaped faces, short round ears, and short tails. The stout bears have a large muscular hump on the upper back that provides strength for digging. The claws on the grizzly’s front paws are curved, large, and sturdy, which help the bear dig in the ground for food. The grizzly’s claws are also handy for turning over rocks to find insects. It is not unusual for a male grizzly to be eight feet tall, which is taller than any basketball player. The male can weigh up to 900 pounds. Females are smaller, weighing 300-400 pounds. Grizzlies that live where food is plentiful tend to weigh more. The bears spend most of their time alone, roaming their habitat and searching for food.

Although the grizzly is a loner, it is not unusual to see several grizzlies feeding on the fish near rivers where salmon are plentiful. Grizzly bears are animals that hibernate or are inactive during the cold months. They store enough fat during the summer to sustain them during hibernation. Grizzlies dig a den or find a cave for hibernation. Once a grizzly enters hibernation, it rests there for about five months. During that time, the bear does not eat, drink, urinate, or defecate. In early spring, grizzlies come out of hibernation.

Grizzlies require large areas of habitat for roaming and hunting. Females need up to 300 square miles, and males require up to 500 square miles, but grizzly habitats can overlap. The western United States was once a place where grizzlies roamed freely, as far south as Mexico. However, when settlers moved westward, rural development resulted in habitat loss. The invasion of humans sent grizzlies to higher grounds such as the Northern Rocky Mountains and other remote areas of the Northwest. The California Grizzly Bear or Ursos arctos californicus has been extinct since the early 1900s. The grizzly bear is California’s state animal, and the state proudly displays it on the state flag.

Of the remaining 1,500 grizzlies in the lower 48 states, most live in northwestern Montana and in or around Yellowstone National Park. Northern Canada and inland Alaska both have large numbers of grizzly bears. Although grizzlies are considered big game animals, in the continental United States, there are laws to protect the bears from becoming extinct. In 1975, the U.S. Fish and Wildlife Service placed the bears in the lower 48 states on the list of threatened species under the Endangered Species Act.

Humans continue to threaten the grizzly’s habitat. Bears that live near campgrounds can become accustomed to searching for food left behind at campgrounds and garbage disposal areas. Humans who feel threatened by the bears sometimes kill them. Illegal hunting or poaching is still a threat to grizzly bears despite their being on the endangered species list.

Grizzlies are omnivores, meaning they eat plants and animals. Grizzlies eat plant foods such as berries, grasses, roots, mushrooms, insects, and animals like deer, elk, and mice. This bear is known for its love of fish and often lives near remote rivers. The bears are big eaters and can consume as much 90 pounds of food each day, which is like eating more than 350 large hamburgers! When food is scarce, the grizzly may rummage through trash or try to find food at a campground.

The grizzly’s hunting and eating habits play a role in keeping the ecosystem healthy in the areas where they live. When grizzlies consume plant-eating animals, it helps prevents those animals from ruining the plant life in areas where grizzlies roam. As they dig for food, grizzlies turn or till the soil. After feeding, grizzlies leave behind uneaten animal parts and carcasses that decay and serves as a natural soil fertilizer.

Movies and television shows portray grizzlies as aggressive toward humans. However, humans are the greatest threat to the bears. These bears keep to themselves and avoid humans. They will flee from dangerous situations but will become aggressive when threatened. If animals or humans try to harm grizzlies or their cubs, the bears can become violent quickly and will attack. About half of grizzly cubs do not live to reach adulthood because of diseases and grizzly predators that include mountain lions, wolves, and adult male grizzlies.

Grizzlies breed when they are mature, between three and eight years old. The bears mate from May through July with June and July being the peak months for breeding. During the mating period, a male spends about a month with a female and then leaves. The female goes into a den and hibernates during the winter. After about five months, between January and March, the female typically gives birth to two babies, known as cubs, but can produce up to four. Young grizzly cubs feed on their mother’s milk, which is high in fat. The cubs remain under their mother’s protection until they are about two years old. Half of all grizzly cubs are at risk for dying before reaching adulthood because of diseases and predators. Grizzly bears usually live to be 20-25 years old, but some can live up to 30 years.

There are an estimated 1,500 grizzlies in the lower 48 states, down from 50,000 in the early 1800s. Alaska has about 30,000 Grizzlies, and Canada is home to 26,000. A light-colored grizzly called the prizzly-bear also lives in Alaska. This grizzly-polar bear hybrid is a cross between a polar bear and a grizzly bear.

Is a Grizzly Bear an herbivore, Omnivore, or Carnivore?

The grizzly bear is an omnivore, meaning that it consumes plants and animals. Grizzly bears enjoy dining on berries, plants, small and large animals. Grizzlies love eating fish, and especially salmon found the rivers in the Northwestern United States, Alaska, and Canada.

What animal can kill a grizzly bear?

Humans and other bears can kill grizzly bears. People kill grizzly bears by poaching or hunting them illegally. Hunters also mistake them for black bears, which are legal to hunt and kill in the United States. When grizzly bears surprise humans by rummaging through garbage cans or going after food at campsites, the bears are at risk of being killed. Wolves and mountain lions can kill young grizzly bears.

Grizzly bears are known for avoiding humans. However, they can be dangerous when threatened. When there is a threat to a grizzly bear or its cubs, the animal will become violent and fight for protection. The grizzly bear’s muscular build, heavy body, sharp claws, and ability to run makes it an animal to be feared and respected.

How fast can a grizzly bear run?

Despite its large size, a grizzly bear can run an astonishing 35-40 miles per hour, significantly quicker than the fastest recorded human at full sprint.

What Kingdom do Grizzly Bears belong to?

What phylum do Grizzly Bears belong to?

What class do Grizzly Bears belong to?

What family do Grizzly Bears belong to?

What order do Grizzly Bears belong to?

What genus do Grizzly Bears belong to?

What type of covering do Grizzly Bears have?

Grizzly Bears are covered in Fur.

In what type of habitat do Grizzly Bears live?

What is the main prey for Grizzly Bears?

What are some distinguishing features of Grizzly Bears?

What are some predators of Grizzly Bears?

Predators of Grizzly Bears include humans and cougars.

What is the average litter size for a Grizzly Bear?

The average litter size for a Grizzly Bear is 2.

What is an interesting fact about Grizzly Bears?

Less than 10% of Grizzly Bears make it into adulthood.

What is the scientific name for the Grizzly Bear?

The scientific name for the Grizzly Bear is Ursus Arctos Horriblis.

What is the lifespan of a Grizzly Bear?