Horseshoe crabs are older than the dinosaurs and outlived them!

Click through all of our Horseshoe Crab images in the gallery. 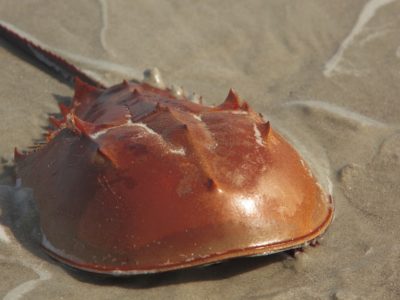 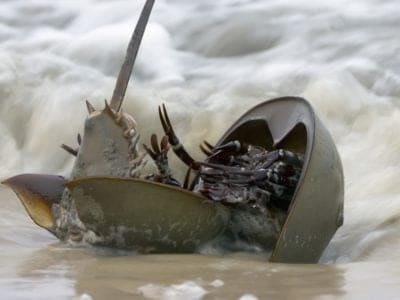 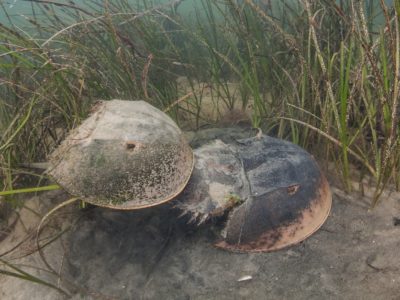 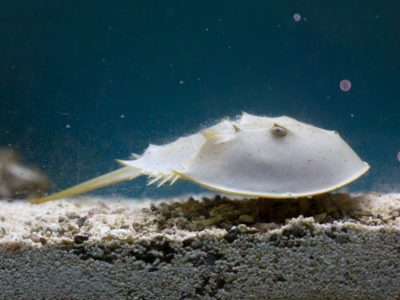 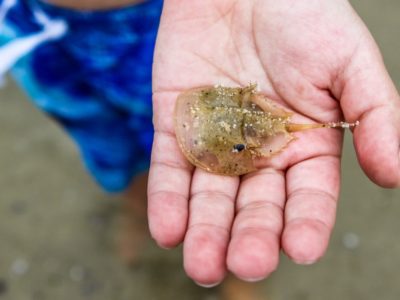 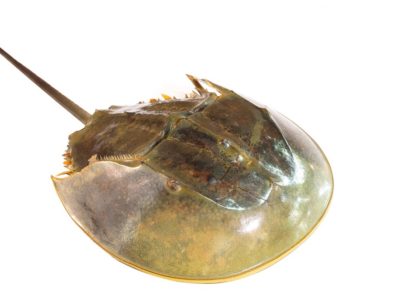 View all of the Horseshoe Crab images!

Characterized by its big protective shell, the horseshoe crab is a great example of a living fossil.

One of the oldest animals on earth, horseshoe crabs have been roaming the seas for hundreds of millions of years. Indeed, they have had to adapt to continents forming and reforming and have survived Ice Ages and whatever it was that made the dinosaurs and so many other species go extinct. When humans arrived they discovered that horseshoe crabs could be used as food and as bait to catch other kinds of food, and now they are used for medical research.

Some fascinating facts about the horseshoe crab include:

The animal’s appearance is unmistakable. The soft parts of its body are completely covered with a tough, horseshoe-shaped carapace. The body has three parts to it. The prosoma can be thought of as the head, then there’s a middle part called the opisthosoma and the tail, or telson. The tail, which is long and stiff, looks menacing, but it’s there to act as a rudder when the horseshoe crab swims and to help turn it upright if it’s turned over.

The animal has many eyes. It has eyes on and even under its head, and there are even eyes under its tail. This may be why they are sometimes found swimming upside down.

If the animal is flipped upside down, a person will be able to see its book gills, which it uses to breathe underwater. These gills get their name because they look like the pages of a book.

Though they lack teeth, they can still eat shellfish whose shells aren’t too thick. This is because they have a mouth that’s filled with bristles found in the middle of their five pairs of legs. They use their legs to move their food to their mouth, then chew it by walking.

Because their carapace is rigid, the animal needs to molt to grow. They molt frequently during their first year and can molt as many as 18 times before they are of reproductive age, which is about nine. Since females are bigger, they molt more times than males. When the male molts for the last time, he develops claspers that look like boxing gloves. This helps him hold on to the female during the spawning season.

All species like shallow water with muddy or sandy bottoms. There are at least millions of these animals in the oceans of the world, though in some places their numbers are declining. The mangrove and tri-spine horseshoe crabs can be found in salt or brackish water around southeast Asia and north into China and Hong Kong. The Atlantic horseshoe crab is found along North America’s Atlantic coastline and in the Gulf of Mexico. The Indo-Pacific horseshoe crab is found on the coasts of the South China Sea down to the Bay of Bengal.

These animals eat small fish, bivalves, and other invertebrates. They also eat algae. Predators on young and adult horseshoe crabs include sea turtles, but the greatest contribution they make to the food cycle is their eggs. Horseshoe crabs come to the beach to lay eggs at the same time many shorebirds are migrating. Horseshoe crab eggs are their main source of protein. Fish such as eels, perches, and flounders also eat the eggs and the newly hatched animals. “Real” crabs also indulge in the bounty of eggs.

These animals also has its share of symbionts, since at one point it will no longer molt. Clams scuds, marine worms, algae, barnacles, oysters, starfish, and other creatures live on and in the horseshoe crab’s shell.

These animals can live as long as 20 years, and some biologists believe the animal can live as long as 30 years. Its spawning is one of the most amazing spectacles in nature. They spawn in the spring at high tide during the new or full moon. Males get to the beach first and wait for the females. When a female arrives, a male attaches himself to the back of her shell with his claspers. There may be half a dozen males clinging or attempting to cling to her.

The female carries between 60,000 to 120,000 eggs that she lays about 4000 at a time during high tide. As she lays the eggs, the male fertilizes them. They hatch after about two weeks if the birds and other animals haven’t gorged on them. In places where farming of the horseshoe crab takes place, eggs can be artificially inseminated.

Horseshoe Crab in Fishing and Cooking

These animals do not have much meat on them, but the meat is considered a delicacy by some who are willing to pay a good price for it. In Thailand, they’re part of a dish called yam khai maeng da. People in Asia also eat the eggs. However, it is crucial to find an edible horseshoe crab, for eating one that has tetrodotoxin can be fatal. Horseshoe crabs are also used as bait for eels, conch, and whelks.

There are millions of Atlantic species, even as its status is near threatened. Half a million are used every year for research and at least a million are used for bait. But the tri-spine species is endangered, and there’s not enough data on the other two species.

Can you eat horseshoe crab?

The horseshoe crab is edible, but some people may consider it unappetizing or even toxic.

Where do horseshoe crabs live?

The horseshoe crabs live near the coasts of the Eastern United States, India, and East Asia. They come up on the beach every year for the breeding season.

What is horseshoe crab blood used for?

The blood of the horseshoe crab has the ability to coagulate or clump up in the presence of bacterial toxins. In human hands, this helps to ensure that vaccines and other medicine are free of dangerous chemicals. To harvest the blood, the animal is caught, drained a little, and then released back into the water. This method has a mortality rate as high as 30% though.

How many eyes does a horseshoe crab have?

The horseshoe crab has a total of 10 eyes. This includes a pair of true compound eyes near the head, a pair of eyes around the middle that can sense ultraviolet light, and a bunch of other basic photoreceptors along the tail. It actually has relatively poor eyesight during the day, but this is more than compensated with its enhanced night vision.

Can a horseshoe crab hurt you?

Horseshoe crabs are fairly harmless creatures that primarily rely on their hard shell for defense. The sharp tail is not an aggressive instrument. Instead, it serves the purpose of flipping the creature over when it is turned upside down. New Jersey actually started a campaign to inform beachgoers that they should flip over a stuck horseshoe crab.

Horseshoe Crabs are Omnivores, meaning they eat both plants and other animals.

What Kingdom do Horseshoe Crabs belong to?

What class do Horseshoe Crabs belong to?

What phylum to Horseshoe Crabs belong to?

What family do Horseshoe Crabs belong to?

What order do Horseshoe Crabs belong to?

What type of covering do Horseshoe Crabs have?

Horseshoe Crabs are covered in Shells.

What are some predators of Horseshoe Crabs?

How many babies do Horseshoe Crabs have?

The average number of babies a Horseshoe Crab has is 90,000.

What is an interesting fact about Horseshoe Crabs?

Horseshoe Crabs have changed little in over 500 million years!

What is a distinguishing feature of the Horseshoe Crab?

How many species of Horseshoe Crab are there?

There are 4 species of Horseshoe Crab.

What is the biggest threat to the Horseshoe Crab?

The biggest threat to the Horseshoe Crab is habitat destruction.

How many Horseshoe Crabs are left in the world?

The population size of the Horseshoe Crab is unknown.

How do Horseshoe Crabs have babies?

Can a horseshoe crab kill you?

Why is the horseshoe crab's blood important to humans

The blood of the Atlantic horseshoe crab is used to create Limulus amebocyte lysate, or LAL which helps scientists find bacterial toxins in medicines. The price of LAL is about $15,000 a quart, but the price may be high indeed for the horseshoe crab. About 10 to 30 percent of the animals don’t survive having their blood drawn.

Are horseshoe crabs killed for their blood?

Horseshoe crabs are not intentionally killed for their blood. After blood is drawn, they are supposed to be returned to the wild. Because so many of the animals die anyway, there is some consideration of farming or culturing horseshoe crabs. Horseshoe crabs can be kept in captivity, so farming is an option.

What do horseshoe crabs eat?

What is horseshoe crab blood used for?

Substances in horseshoe crab blood are used to make sure that medicines are safe.