The humpback whale makes complex, beautiful songs with its throat

Click through all of our Humpback Whale images in the gallery. 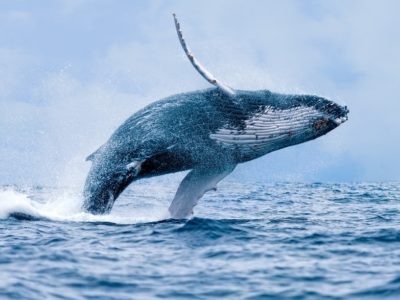 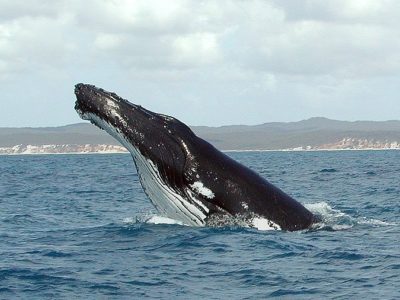 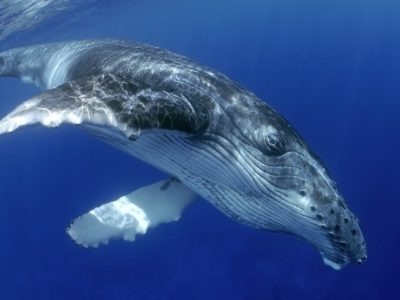 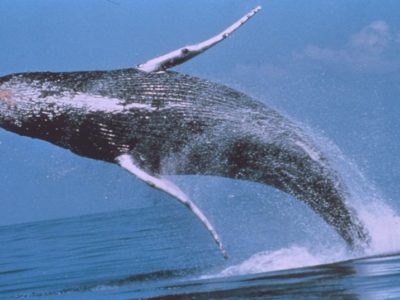 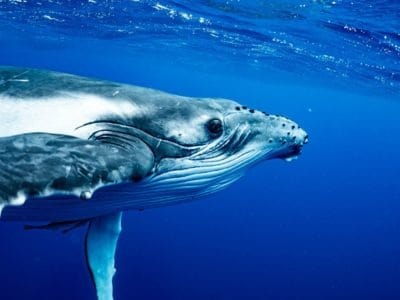 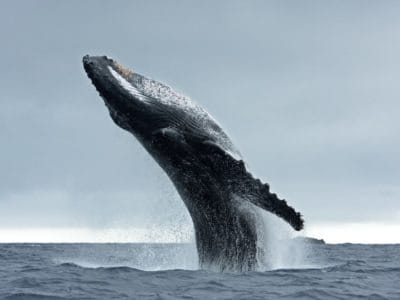 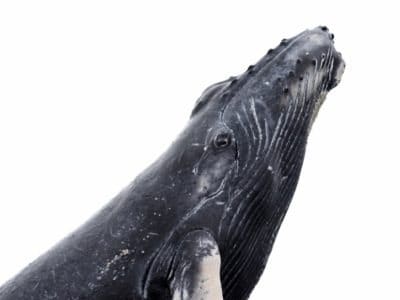 View all of the Humpback Whale images!

The sight of the humpback whale swimming or breaching the water is one of the most impressive spectacles in all of nature.

Their complex and unique behaviors have made them a favorite among whale watchers around the world. Once on the brink of extinction, the humpback whale has now almost completely recovered. It is a true conservation success story.

The scientific name for the humpback whale is Megaptera novaeangliae. This is a Greek term meaning large (mega), wing (ptera, for its large pectoral fin), and New Englander (novaeangliae, for where they were first described in detail). The humpback is the only currently living member of its genus. It also belongs to the family of Balaenopteridae: a group of “rorqual” whales with nine living species, including the blue whale and fin whale.

The humpback whale is easy to distinguish from other whales. It has a small hump near the dorsal fin (which is particularly prominent when it arches its back), a massive pectoral fin about a third the size of the entire body, and hair follicles all over the head and jaw. In place of teeth, the whale has a complex network of baleen plates that filter out food from the water. This baleen is composed of keratin, the same substance in fingernails and hair.

The humpback also sports a dark back and lighter underside. Each pattern of colors and scars along its stomach is entirely unique to the individual. The humpback whale measures a truly massive 48 to 62 feet long (about the size of a school bus) and some 40 tons in weight. Females are larger than males on average, which is unusual for a mammal.

The humpback tends to live and feed near the shore of oceans and seas all around the world, sometimes swimming as close to land as harbors and rivers. They can also dive more than 600 feet at a time before returning to the surface for breath. One of the most remarkable facts is that this species undertakes an epic migration up to 25,000 miles every year between the nutrient-rich polar climates in the summer and tropical or subtropical climates in the winter to mate and live off its fat reserves.

Until the international ban on whaling in 1985, the humpback was hunted almost to extinction. Some populations fell into precipitous decline and had no more than a few hundred individuals left. Today there are as many as 150,000 humpbacks and 16 distinct population groups around the world, only a few of which are still endangered. In 2008, the International Union for Conservation of Nature changed the humpback’s status to least concern, the best possible classification. The largest remaining threats are ship collisions and accidental entanglements in fishing gear.

The humpback whale is an opportunistic feeder that plays an important role at the top of the marine food chain.

What does the humpback whale eat?

The diet of the average adult humpback whale consists of some 2,000 pounds of plankton, fish (like herring and mackerel), and crustaceans (krill is among their favorite food) every single day. For its diet, the whale relies on a method called bubble netting in which it creates a spiral of bubbles from below to trap its prey. It then gulps huge quantities of prey and squeezes out the water back through its baleen plates.

What eats the humpback whale?

An adult humpback whale has very few natural predators. The only known species to kill a full-grown humpback is a pack of great white sharks. But juvenile humpbacks are much more vulnerable to predation. Many of them bear scars from shark and killer whale attacks.

The humpback whale is a polygamous species. In the winter breeding season, after completing its migration, several males will surround a sexually available female and compete aggressively for the right to mate with her. Mates engage in all kinds of elaborate courtship behavior such as rolling, flipping, and tail fluking. They also dive and surface vertically to each other.

Once the female is impregnated, the gestation period lasts an exceptionally long and difficult 11 months. The father appears to play almost no role in parenting, but the bond between the mother and calf is particularly strong. They are often seen swimming close together with their flippers touching.

The mother nurses and takes care of the young in its first six months to year of life. Calves reach sexual maturity between four and five years, but they double in size every year and do not stop growing until they are about a decade old. The life expectancy for a healthy humpback whale is up to 50 years in the wild. Due to the length of development time, females only reproduce every two to three years.

Humpback Whale in Fishing and Cooking

The humpback whale was once caught on an industrial scale for its blubber and meat. But even though whale meat is banned in many countries around the world, it still shows up in some markets.

How big is a humpback whale?

The humpback whale can reach up to 62 feet long and weighs 40 tons.

What sound does a humpback whale make?

Humpback whales make a series of moans, cries, and howls to communicate with each other. Lacking vocal cords, humpbacks produce sounds with a larynx-like structure in the throat. These sounds travel great distances through the water to reach the ears of other whales. Both sexes can produce sounds, but only males produce the haunting and beautiful whale songs for which they’re known. Lasting between five and 35 minutes at a time, these highly complex songs vary between groups and appear to change slightly every year. Scientists have yet to identify the facts behind their full meaning, but they likely contain information about personal identity, navigation, and nearby threats.

Is a humpback whale dangerous?

Humpback whales may act aggressively in defense of itself and its pod, but very few overt whale attacks on humans have ever been documented. In fact, humpback whales are a friendly species. They have been observed interacting positively with bottlenose dolphins. They also sometimes gather in mixed groups with blue, gray, sperm, and fin whales. Humpbacks often allow divers to approach close as well.

How many humpback whales are left?

It is estimated that up to 150,000 humpback whales are alive today. The IUCN Red List claims that there are some 84,000 mature individuals, and numbers appear to be increasing around the world.

Where are humpback whales found?

The humpback whale is found in almost every ocean and sea of the world except for the farthest reaches of the north. As numbers have recovered, this species has even begun appearing once again in parts of the Mediterranean Sea as part of its early migration patterns. This migration takes it from colder to warmer waters in the winter.

Humpback Whales are Omnivores, meaning they eat both plants and other animals.

What Kingdom do Humpback Whales belong to?

What phylum do Humpback Whales belong to?

What class do Humpback Whales belong to?

What family do Humpback Whales belong to?

What order to Humpback Whales belong to?

What genus do Humpback Whales belong to?

What type of covering do Humpback Whales have?

In what type of habitat do Humpback Whales live?

Humpback Whales live in oceans close to the shore.

What is the main prey for Humpback Whales?

What are some predators of Humpback Whales?

Predators of Humpback Whales include humans and killer whales.

What is the average litter size for a Humpback Whale?

The average litter size for a Humpback Whale is 1.

What is an interesting fact about Humpback Whales?

There are thought to be 80,000 Humpback Whales left in the wild!

What is the scientific name for the Humpback Whale?

The scientific name for the Humpback Whale is Megaptera novaeangliae.

What is the lifespan of a Humpback Whale?

Humpback Whales can live for 45 to 50 years.

What is a distinguishing feature of the Humpback Whale?

Humpback Whales have a small hump on their backs.

What is the biggest threat to the Humpback Whale?

The biggest threats to Humpback Whales are accidents with boats and nets.

How do Humpback Whales have babies?