Some huntsman spiders have an interesting way of moving around. Some cartwheel while others do handsprings or backflips.

Colour
Skin Type
Hair
Lifespan
2.5 years
Weight
0.024 ounces to 0.37 pounds
Length
0.71 inches with a 5.9 inch leg span, though some species are much larger
Age of Sexual Maturity
About one year

Click through all of our Huntsman Spider images in the gallery. 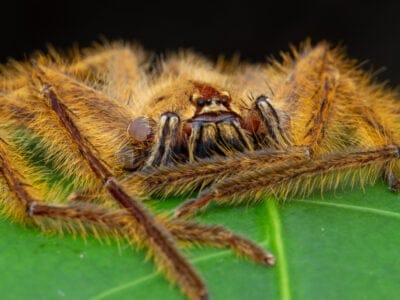 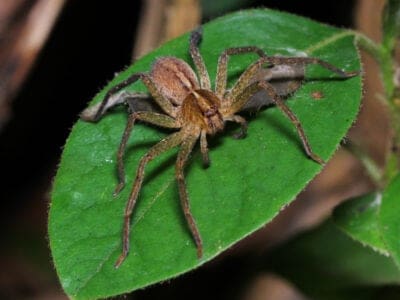 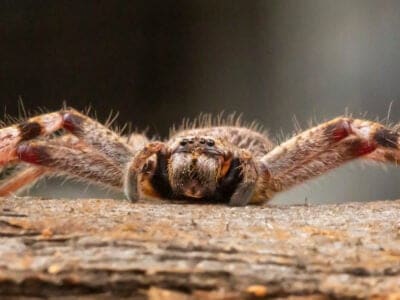 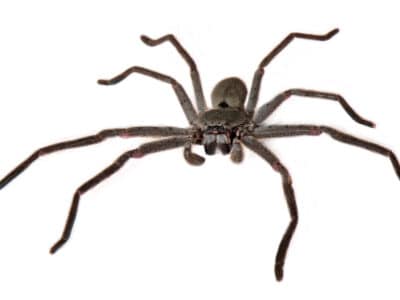 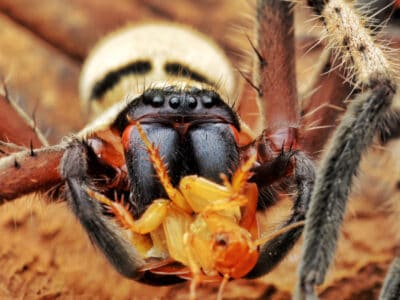 View all of the Huntsman Spider images!

The largest spider by leg span in the world.

Huntsman spiders belong to the Sparassidae family and get their common name because they are efficient and lethal hunters. There are 96 genera and 1383 species as of 2021. They are usually large, hairy spiders that hold their legs crabwise, which gives them the alternate name of giant crab spider. Most are gray or brown but may have bands and markings over their legs and bodies. They have eight eyes and fairly good eyesight. Like other spiders, they are venomous as opposed to poisonous, and some are capable of inflicting painful bites on human beings. But like other spiders, their venom evolved to subdue their regular prey. Some people welcome huntsman spiders in their homes because they eat pests such as cockroaches.

Appearance: How To Identify Huntsman Spider

It is easy to say that to identify a huntsman spider all that a person needs to see is a giant spider that it holds its legs like a crab. Yet, some species of huntsman spiders aren’t much bigger than regular crab spiders, and the brown recluse is also rather large and has a cancrine stance.

Crab spiders are also called flower spiders because they perch on flowers and ambush insects that light on the flowers. They can slowly change colors to blend in with the flower, but huntsman spiders can’t do this. Most are shades of brown or gray, though some species in the Micrommata genus are leaf green. Huntsman spiders also tend to be furry, and they can easily hide in small spaces despite their size. This is because their bodies tend to be flat, and they have those uniquely foldable legs. They are ambush predators and can also move surprisingly fast for their size.

Habitat: Where to Find Huntsman Spider

Huntsman spiders are found around the world save the coldest areas on earth. They hide in places that don’t see a lot of human traffic, such as garages, barns, and garden sheds. Some hide behind blinds and curtains and startle people who have come to adjust their window dressings. Huntsman spiders also shelter in cars and also startle people who try to adjust their rearview mirror. In the wild, they’re found under bark and under rocks. This gives them the name “wood spider.”

Diet: What Do Huntsman Spiders Eat?

Huntsman spiders usually eat small arthropods. They range from butterflies, cockroaches, and even scorpions. Some species eat other spiders and are indeed cannibalistic. Some huntsman spiders are big enough to take bats, mice and small lizards.

Prevention: How to Get Rid of Huntsman Spiders

There are many people around the world who welcome huntsman spiders into their homes because they eat pests. These are not only roaches and water bugs, but if the spider is big enough, it can even keep down a population of mice. Most huntsman spiders are docile and run away when they’re threatened. Yet it’s understandable if the homeowner really does not want giant poisonous spiders in their home. In that case, it is possible to call in a pest control expert and have them trapped and humanely removed.

Huntsman spiders aren’t really dangerous. They are venomous as opposed to poisonous, and though the bite of some huntsman spiders is painful, the bite usually doesn’t require a person to go to a hospital.

How many legs does a huntsman spider have?

A huntsman spider has eight legs.

How do you identify a huntsman spider?

Generally, huntsman spiders are large spiders that hold their legs as a crab would hold them. They don’t build webs but are very fast. They can quickly run across a floor, up a wall, and even across the ceiling. They usually (but do not always) come in shades of gray or brown.

How do you get rid of huntsman spiders?

If a person simply can’t live with a huntsman spider, it can be trapped humanely and let loose in the woods. Huntsman spiders are good for the environment and provide an inexpensive, indeed, free, form of pest control. People should avoid killing them.

Do huntsman spiders live in the US?

Some species of huntsman spiders are found in the United States. They include the Olios, Macrinus, Decaphora, and Curicaberis genera.

Can a huntsman spider kill you?

A huntsman spider’s bite can’t kill a healthy adult human being, but some spiders have venom that can make a person quite sick. Still, most people who are bitten by a giant crab spider don’t need to go to the hospital.

Huntsman or wood spiders may not be exactly friendly, but they do not go out of their way to attack humans. They are more interested in cockroaches and other prey they can handle.

Why is it called a huntsman spider?

The huntsman spider gets its name because it is good and quick at hunting its prey.

What is the average size of a huntsman spider?

How much does a huntsman spider weigh?

Depending on the species, a huntsman spider can weigh between 0.024 ounces and 0.37 pounds.