Click through all of our Kiko Goat images in the gallery. 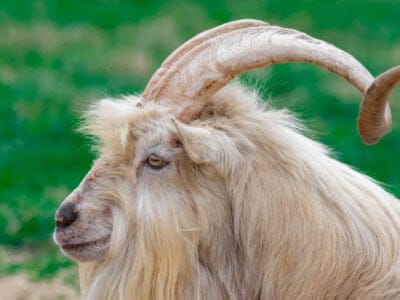 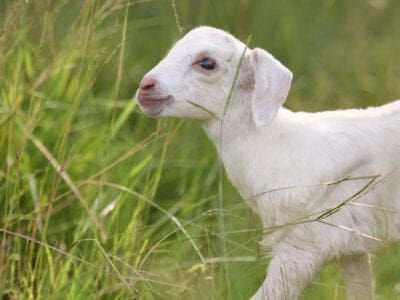 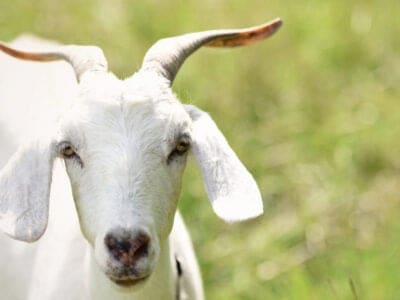 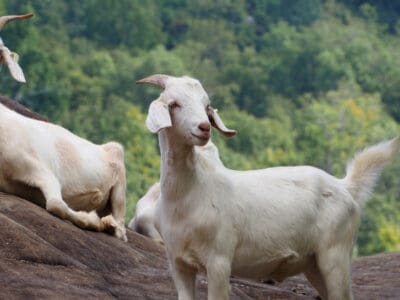 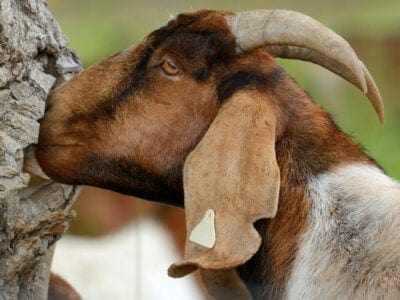 View all of the Kiko Goat images!

Originally created as a crossbreed between dairy goats and feral goats, the Kiko goat is a rather friendly species. It has a self-regulating coat, which means that they don’t typically need to be sheared between seasons. The primary purpose is to provide meat or milk, though it only produces milk for the months following the birth of their young.

Here are a few fun facts about Kiko goats.

The scientific name of the Kiko goat is Capra aegagrus hircus, and it doesn’t go by any other common name (other than “Kiko goat”). It comes from the Bovidae family in the Mammal class. There are currently no subspecies.

While “Kiko” comes from the Maori word for “meat,” the scientific name has a much different source. “Capra” is an Italian word, meaning “nanny goat,” which is likely a tribute to their work as a dairy goat. “Aegagrus” is rooted in Greek, which simply means “goat.” “hircus” potentially comes from the word “hirtus,” which means “hairy, shaggy” in Latin.

This breed has a similar build to that of other goats, showing off a long beard with their thick and curled horns. Adult bucks (or males) typically measure 30-37 inches to their withers, while the does (or females) are smaller, only reaching about 26-30 inches in height.

Regardless of their gender, this breed is often cream or white, though there are some darker variations that look black. With a dense coat, this species is prepared for any kind of weather. In fact, their coat naturally regulates itself to meet the needs of the climate. Their long ears also serve as a temperature regulator, keeping them warm. They typically have strong and thick muscles, adding further defense against the elements.
Despite the large and thick horns, the Kiko goat isn’t much of a fighter.

The gentle and friendly temperament of the Kiko goat is part of the reason that it is so appealing to breeders. With a docile attitude, you might expect them to be passive, but they’ll stand their ground if attacked or threatened. They aren’t fearful of nearly anything, which is why breeders and farmers need to create a habitat that prevents predators from infiltrating their homes.

Directing the breed where it needs to go is rather simple, and they are easy to train, even as a herd. However, very few people keep them as pets. More often, they are kept for their milk or to harvest for meat.

They have a fairly independent personality, which is why they don’t run when danger is afoot. Instead, their typical behavior is to wait and see what will come of the situation. They won’t attack other animals, provoked or not, and they typically keep to themselves.

The breed itself doesn’t require much maintenance, making it incredibly helpful to farmers who take care of them. When constructing a habitat at home, the primary concern is having enough room. They need a place to forage, though their location isn’t quite as particular. They just need enough ground to cover to continually eat the grass and other natural plant life.

Since this goat likes to roam, good fencing is required. These animals have the ability to stand up on their hind feet, giving them up to six feet of height to allow them to clear relatively low fencing. Since the Kiko goat isn’t particularly capable of protecting themselves from potential predators, this fencing needs to be enough to keep any animals out.

With the naturally regulated coat of the Kiko goat, their habitat won’t even need to include much for shelter. They can thrive in damp or dry environments.

The diet of a Kiko goat is rather easy to maintain, especially since they don’t really require supplemental feeding or specialized foods. They need a habitat with plenty of vegetation, which is what they will predominantly graze on.

With the inherited genetics of feral goats, the Kiko goat primarily fends for itself, requiring very little of the humans that care for them. However, if they don’t have enough vegetation in the area, they will leave their habitat to find it.
If the owner wants to make sure that the goat has enough to feed on, they’ll also indulge in high-quality hay, silage, food pellets, and legume grasses. They work with whatever they have, though they will leave their habitat if they run out of vegetation after a while. They become extremely restless without enough food around them.

The natural inclination to feed on the vegetation around them makes them incredibly helpful for land management. In areas that are more prone to fires, landowners may keep them to clear out underbrush or even just eliminate the weeds without the need for a landscaping service.

The breed isn’t particularly good at defending itself, so any critters with claws or teeth that manage to break into their habitat may go after them. This goat will choose to stand their ground, but they don’t have any natural defenses to speak of. Building a habitat is the best way to defend them from predators, though there is no real threat to the population.

Kiko goats are domesticated and bred to be livestock to be kept by humans, so it is primarily up to the owners to decide on the population. They are not found in the wild.

What does the Kiko Goat eat/hunt?

The Kiko goat is a forager, so they’ll eat any plant life in their habitat with which they come into contact. They don’t eat meat, so they have no prey that they typically hunt.

What eats the Kiko Goat?

Kiko goats are primarily bred for their coat and for meat, so the biggest predator is humans. However, if they are not provided enough protection, they are also susceptible to attacks from wild predators, like coyotes, foxes, wolves, dogs, eagles, bobcats, and mountain lions. However, the likelihood of these attacks will primarily depend on the area in which the Kiko goat lives.

The breeding cycle of the Kiko goat is year-round. Farmers need to do more than place the bucks and does together, allowing them to naturally mate to expand their species within their habitat. In fact, this is another reason why farmers prefer to own them over any other goat – the lack of intervention. This species is polyestrous, and it doesn’t have a particular type of year that it should be bred.

Even after five months of pregnancy, the birth doesn’t need to be assisted either. The majority of pregnancies result in twins or triplets, but it isn’t uncommon for a doe to only birth one kid per pregnancy. Annually, they typically give birth to two or more kids, and they will nurse on the mother’s milk until they are two to three months old. The mothers require very little assistance, which is why breeders profit so much from the sale of Kiko goats.
Some of these goats reach sexual maturity by 4 months of age, but it is not recommended to breed them this early. Most breeders wait until the kid is 8 months old and has at least 80 pounds of weight on them to ensure healthy young.

What is a Kiko goat?

A Kiko goat is a breed that comes from New Zealand, used as a source of meat and milk by breeders. They have incredibly high fertility and are rather friendly. They require very little maintenance to maintain habitat.

How big do Kiko goats get?

Absolutely. They are rather compliant livestock, and they are incredibly friendly. Though they are aggressive in the way that they forage, they are friendly with their owners.

How can you tell a Kiko goat?

This type of goat typically has erect ears, a cream or white coat (though it is sometimes black), horns, and a long beard. The Kiko goats in New Zealand are naturally muscular, but the majority of these goats typically reach at least 125 lbs. as an adult.

Yes! This goat produces milk that is significantly lower in butterfat than the dairy goats that typically produce. Though Kiko goats are primarily meant for meat, they can offer milk for the five months after they give birth to their babies.