Spends up to 80% of the time sleeping or resting!

The Koala is a small to medium sized mammal that is found inhabiting a variety of different types of forest in south-eastern Australia. Despite its appearance and the fact that it is also known as the Koala Bear, Koalas are in fact marsupials but are so distinctive amongst this specially adapted family of mammals that they are classified in a scientific group of their own. However, although they are now considered to be one of Australia’s most iconic mammal species when European settlers first arrived things were very different, with millions of Koalas known to have been killed every year for their pelts (fur). The Koala is a unique animal that famously feeds only the leaves of the eucalyptus trees which they inhabit but this diet is very hard to digest and lacks many of the vital nutrients that are key to the survival of a number of animal species. Today, although populations are stable and widespread the Koala is affected by habitat loss as vast areas of land are cleared every year to support growing development.

The Koala is one of the most charismatic of all marsupials with its large, wide face and round, white-tufted ears giving it the appearance of a small bear, along with their lack of a visible tail and smooth, black nose. The Koala has dense and soft grey or grey-brown fur which is lighter on their underside and mottled on the rear. Due to the fact that Koalas spend almost all of their lives in the trees, they have evolved a number of adaptations to help them with their arboreal lifestyle including having short, powerful limbs that are tipped with sharp claws.

Having two opposable thumbs and three fingers on each hand means that Koalas are able to grip onto even the smoothest of bark when climbing and feeding in the trees. Koalas also have human like fingerprints! Learn more amazing animal fun facts here.

Koalas move about in the trees by jumping, first gripping the trunk with their front paws (helped by their rough paw pads and claws) before then moving both their back legs up the tree together, allowing them to get higher up.

The Koala would have once been widespread throughout south-eastern Australia and on a number of its surrounding islands but populations (particularly in the south) were wiped out in some areas due to hunting. They are however, surprisingly resilient and adaptable animals that are known to inhabit various types of forest from the tall eucalyptus forests, to coastal regions and even low-lying woodlands further inland. Despite the fact that they are common in much of their natural range today, land clearance has not only meant a loss of their habitats but also separates populations from one another making them more and more isolated. It is not just loss of habitat to Human activity though that has led to population declines in certain areas, as quick-spreading forest fires can devastate vast areas of land in minutes and severely affect the local Koala populations in the process.

The Koala is a solitary and nocturnal animal that spends most of the daytime hours sleeping in the fork of a eucalyptus tree. Their low-energy diet (that is comprised only of the fibrous leaves of the eucalyptus) leads to Koalas leading a largely inactive lifestyle as they can happily spend up to 18 hours a day sleeping or simply just sit in the trees to conserve energy. Everything from sleeping to eating and even breeding is done in the trees as although Koalas are known to come down to the ground quite frequently, it is only so they are able to move to another tree. Koalas are also sedentary animals which means that they occupy a fixed home range which can vary in size depending on the abundance of food available (home ranges are smaller in areas with more food as there is no need to travel as far). Although the home ranges of males and females do overlap, males will not tolerate rival males intruding on their territory and fight viciously by scratching and biting.

During the breeding season, males can be heard producing loud booming calls through the forest which are to both attract a female mate but also to deter any potential rivals. In Koala society it is the dominant male that gets to mate with the most females meaning that although males (like females) are able to reproduce from the age of two, breeding is not normally successful until the male Koala is between 4 and 5 years old and has established his dominance. After a gestation period that lasts for a mere 35 days, a single joey is born that is about the size of a bee and very underdeveloped, and immediately crawls unaided into the pouch on its mother’s belly. Here it attaches itself to one of the two teats and remains in the safety of the pouch until it is weaned at between 6 and 7 months old after having grown dramatically. The young Koala then clings onto its mother’s back where it tends to remain for another few months or until the next season’s young has developed and is ready to leave the pouch.

The Koala is a herbivorous animal that only feeds on the leaves of the eucalyptus (gum) tree in order to survive. Despite there being around 600 different species of eucalyptus, Koalas only seem to feed on 30 of them which depends on the surrounding habitat. Eucalyptus leaves are tough and fibrous and often toxic making them inedible to other herbivorous animals but the Koala has evolved to fill this gap in the eco-system and has large cheek pouches where the leaves are stored. Once full, the Koala then begins to grind the leaves down into a pulp using their flat cheek teeth with some of the toxins then being detoxified by the liver. The Koala also has an incredibly long digestive tract to help it to break down the tough leaves which is more than three times its body length. In order to help the process Koalas are also known to occasionally eat soil, bark and gravel to aid the digestion of such a fibrous plant.

Despite being relatively small, the lack of native mammalian predators in Australia means that adult Koalas have very few natural predators with the exception of large Birds of Prey. Young Koalas are more vulnerable however and are preyed on by a number of different animals including Snakes, but both are most threatened by domestic animals particularly dogs that not only attack Koalas but are also known to spread disease into local populations. This is actually one of the biggest threats to Koalas in certain areas as large numbers of individuals have been affected particularly by the Chlamydia bacterium, which can actually be treated with antibiotics. Other threats to the current Koala populations include habitat loss to growing Human settlements, tourist developments and forest fires that can spread rapidly in semiarid regions. The Koala populations on a number of islands have also been affected by over-population as the increasing number of individuals means that there is less food to go around.

Due to the fact that Koalas sustain themselves on a diet that is only comprised of leaves they have little need to drink as they get almost all of the water that they need through their food. However, living on a diet that is so low in nutrients has led to the Koala evolving a very small brain for its body size as this organ can drain the body’s energy supplies. After having spent their first six months of life developing in their mother’s pouch suckling milk, baby Koalas must then attempt to eat solid foods with the first one being the soft droppings of their mother. Young Koalas are thought to do this as it contains a number of microbes that help the young to both fight off disease and to begin digesting the tough, fibrous leaves of the eucalyptus.

The Koala would have once been abundant throughout the forests of south-eastern Australia but intense hunting of them for their soft fur in the early 20th Century led to drastic population declines and even local extinction in some areas. When the industry peaked in 1924 two million pelts were traded and eventually led to public outcry over the situation. Since then, the hunting of Koalas has been banned and management of populations has seen them increase once again. Despite their rising population numbers though, Koalas are affected by Human activity throughout much of their natural range mainly in the form of habitat loss as vast areas of land are cleared annually for development and agriculture. However, the Koala today is one of Australia’s most famous and treasured species of mammal and is found on numerous emblems and in stories not just in Australia but worldwide.

Today, the Koala is listed by the IUCN as an animal that is of Least Concern from becoming extinct in its natural environment in the near future. Population numbers are not just stable and widespread, but they are in fact too high in some areas with 10,000 individuals having been relocated back to mainland Australia over the past 75 years to prevent island populations from growing out of control. They are however, becoming more and more remote and isolated from one another which could cause problems in the future and are severely affected by introduced diseases in certain areas. Where possible though, infected Koalas (and particularly those that have been attacked by domestic dogs) are given veterinary first aid to try and help them in the future and prevent a large outbreak spreading through entire populations.

Click through all of our Koala images in the gallery. 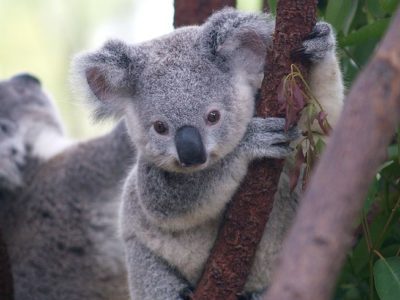 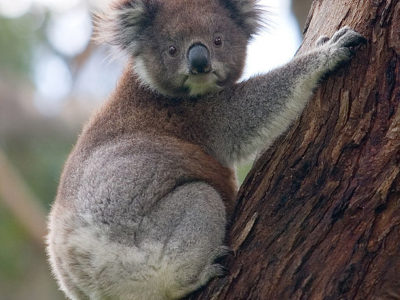 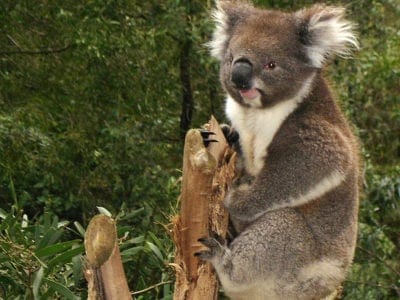 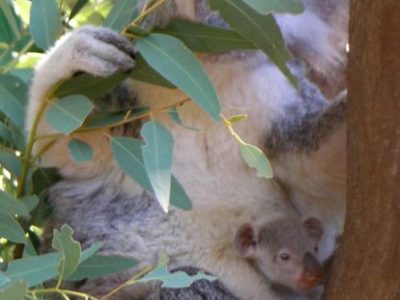 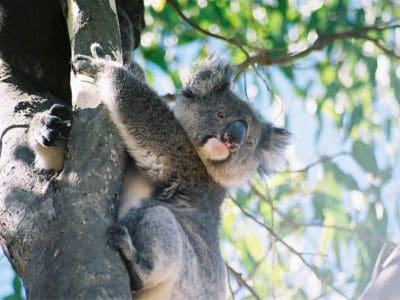 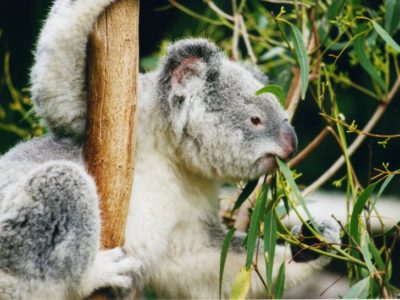 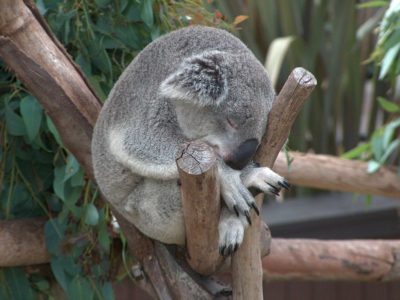 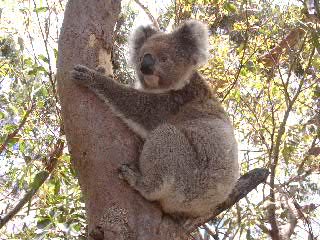 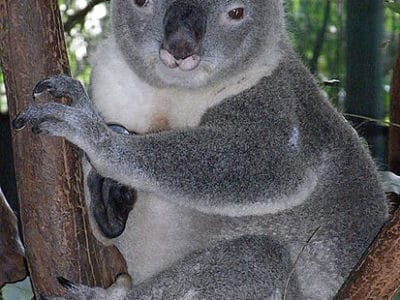 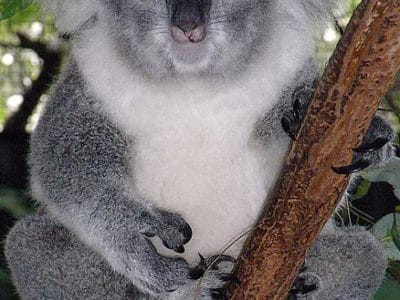 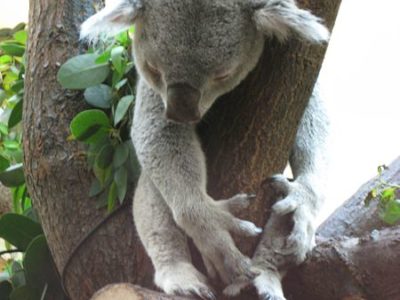 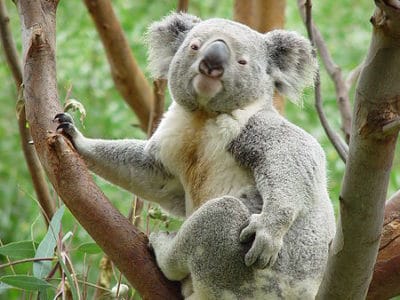 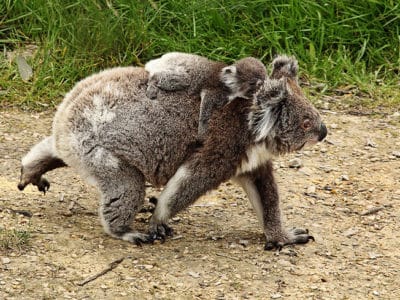 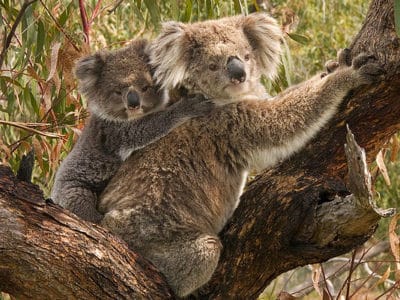 View all of the Koala images!

Are Koalas herbivores, carnivores, or omnivores?

What Kingdom do Koalas belong to?

Koalas belong to the Kingdom Animalia.

What phylum do Koalas belong to?

Koalas belong to the phylum Chordata.

What class do Koalas belong to?

Koalas belong to the class Mammalia.

What family do Koalas belong to?

Koalas belong to the family Phascolarctidae.

What order do Koalas belong to?

Koalas belong to the order Diprotodontia.

What genus do Koalas belong to?

Koalas belong to the genus Phascolarctos.

What type of covering do Koalas have?

Koalas are covered in Fur.

Where do Koalas live?

In what type of habitat do Koalas live?

What are some predators of Koalas?

Predators of Koalas include birds of prey, dingos, and humans.

What is the average litter size for a Koala?

The average litter size for a Koala is 1.

What is an interesting fact about Koalas?

Koalas spend up to 80% of their time sleeping or resting!

What is another name for the Koala?

The Koala is also called the koala bear.