Natively found on the island of Madagascar!

“Lemurs are found only on Madagascar.”

Lemurs are tiny species of primate that are only found on one group of islands: Madagascar and the Comoro Islands. This makes them one of most endangered groups of animals on earth. They have tiny bodies with long, thin tails. There are over 100 species of living on the islands.

Their scientific name lemur is a Latin word meaning “ghosts, spector of the dead.” This is due to these creatures’ bright white faces, large eyes, and nocturnal habits.

A small species of primate, lemurs are animals that can grow to be about 3 inches to 28 inches long (excluding their tails) and weigh anywhere from less than a pound to 22 pounds. Their tails can be much longer than their bodies, and on average, they weigh about as much as a cat.

Lemurs are fox-like animals with narrow faces. They have pointed ears and a small, moist nose. Their fingers are adapted for gripping trees and fruit, and their sharp claws help them climb trees. Some have longer hind legs, built for jumping from branch to branch. Unlike other monkey species, lemurs do not have prehensile tails.

They vary greatly in appearance; their fur can be gray, brown, or black. They can be solid colored, or have features like ringed tails or white patterns. By far the most recognizable species is the ring-tailed lemur. Named for its ringed black and white tail, these lemurs have black skin, wide brown eyes, and gray coats. The lesser mouse lemur, or gray mouse lemur, has reddish-grey fur and, as the name suggests, looks a bit like a mouse. The lesser mouse lemur is one of the smallest lemur species.

One very unique species of lemur, called the aye-aye, is a small brown creature known for its orb-like eyes and long, prehensile middle finger. It uses this finger to dig grubs out of holes in trees and branches.

These creatures spend most of their days flying through the trees, on the lookout for food. They live in groups called “troops.” These groups can be as small as 6 animals, or as large as 30. The group constantly looks out for its members, and they use alarm calls to alert each other to danger. These calls can vary depending on the species — some calls sound cat-like (ring-tailed), some sound like chirps (mouse), and some sound like grunts (brown).

These creatures are unique in that they live in a matriarchal society — one dominant female typically leads a group. She decides where the group sleeps and eats. These animals are better adapted for nocturnal life, which is the reason they have such large eyes. They sleep in nests made of leaves, or in the forks of trees.

The ring-tailed species is unique among these primates because they are mostly ground dwellers. They are the only species known to have ringed tails, which they use for communication. A tail held high can alert others to danger, even in the dense woodlands. They also mark their territory using scratches on trees, as well as by scent marking the area.

Madagascar and the islands around it are a very isolated place, meaning the species there evolved without outside influence. It is said that lemurs may have floated to Madagascar form the mainland and evolved there. Madagascar is an island with a great amount of biodiversity, and may different habitats for these creatures to inhabit. Some areas are marshy, others are dry. Some are mountainous, and others are forested. Generally, they prefer to live in the trees. But each species evolved specifically to fit in the niche of its habitat on Madagascar and the Comoro Islands.

Larger species are generally herbivores. They prefer leaves, fruit, flowers, bark and tree sap. Smaller species become more omnivorous, chowing down on insects as well as fruit and leaves. Sometimes, they even decide to eat bird eggs or small birds themselves.

Madagascar’s top predator is the fossa, a mongoose relative that preys on many different species that live on the island. In addition, lemurs can fall prey to flying harrier hawks and boa constrictors as well.

Habitat loss is an enormous threat to every species on Madagascar, and the lemur is no exception. Illegal deforestation and mining have threatened lemur species, with 17 having gone extinct since humans arrived on Madagascar over 2,000 years ago. Hunting is also hurting these populations. Invasive species like dogs and cats, which humans brought with them to Madagascar, are also a threat and generally disrupt the fragile ecosystem of the island.

As a species, they vary from vulnerable to critically endangered.

Males will scent mark and quarrel over females during the mating season. In some species, females are fertile for only one day out of the entire year. Most only produce one baby per season, but some litters can be as large as 6 young. Most gestation periods last between 2 and 5 months.

Young lemurs are known as pups, and typically cling to their mothers for the first few weeks of life. In some species, such as lesser mouse lemurs, the babies are not strong enough to hold on and must be carried around. Soon, the pups climb from the belly to the back. After three to four months, the pups are able to walk and climb by themselves and no longer need to hold on to their mothers.

Some species take a different approach: for the first month, mothers hide their young in large piles of foliage while they go forage. This allows the young to stay hidden. Once the first month of life is over, the young become too curious and active to stay put.

Lemurs are typically done growing after they reach 1.5 years of age. Some can live as old as 30 years, but this varies depending on the species.

Populations vary wildly between species depending on their conservation status. One species, known as the northern sportive lemur, is estimated to only have 18 living individuals remaining. Only 8% of lemurs are classified as “least concern.” All other species have experienced population decline due to the multiple threats to the biodiversity of Madagascar.

Lemurs in the Zoo

Ring-tailed lemurs are the most common variety found in zoos. The San Diego Zoo features five species, including ring-tailed and blue-eyed black lemurs. Other zoos that house lemurs as well as support conservation are the Akron Zoo in Ohio, and the Jacksonville Zoo and Naples Zoo in Florida.

Click through all of our Lemur images in the gallery. 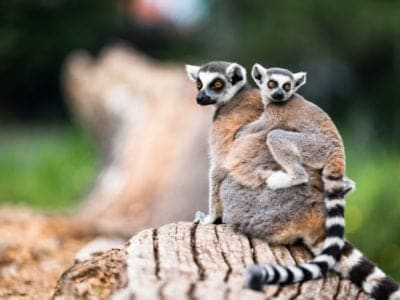 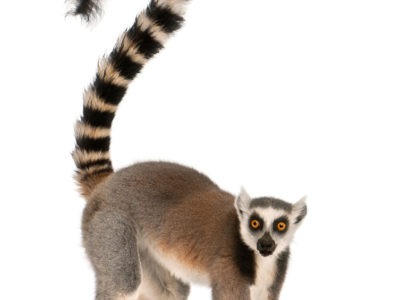 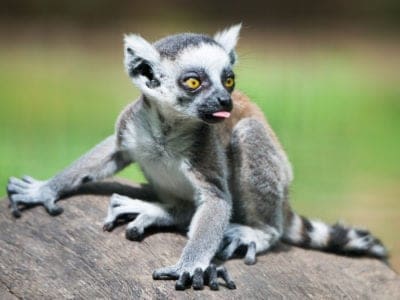 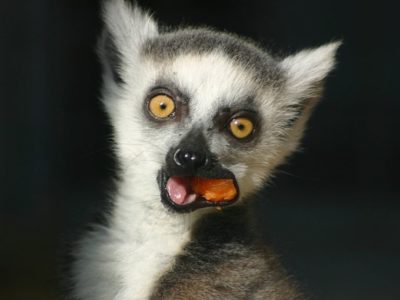 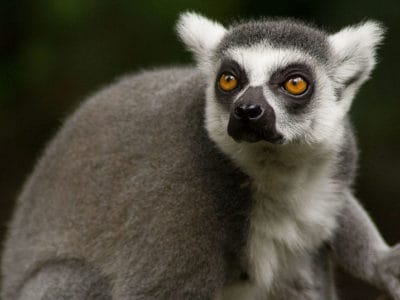 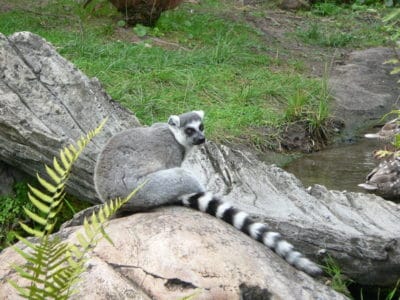 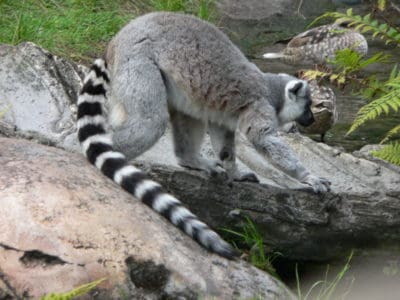 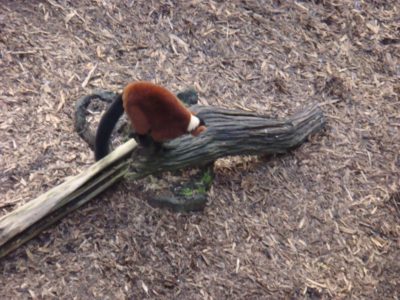 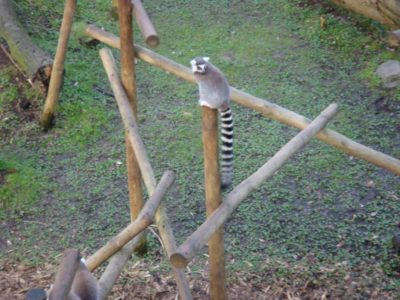 View all of the Lemur images!

How many tongues does a lemur have?

Lemurs have one primary tongue, which is used for eating just as a human’s tongue is. However, lemurs also have a secondary tongue under their first tongue. This is made of stiff cartilage and is useful for grooming other lemurs as well as cleaning the lemur’s teeth.

Lemurs are generally small primates, no more than 22 lbs. They have large eyes, tiny but dexterous hands, and long tails that are often greater than or equal to the length of their bodies. They can be many different shades of brown, black, and red. One species, the ring-tailed lemur, is known for its black and white banded tail.

Lemurs are not dangerous to humans in the wild, but pet lemurs are a different story. It is surprisingly easy to own a pet lemur in most staes, and this can be disastrous to both the lemur and the owner. Lemurs need other lemurs to remain psychologically healthy, and lemurs who live by themselves can become extremely aggressive towards their caretakers. Lemur husbandry is best left to zoos and wildlife sanctuaries, where the lemurs can live in social groups with others of their kind.

Lemurs in the wild live in large complex social structures, where they groom each other and warn each other of danger. Though male lemurs quarrel during the mating season, lemurs are generally friendly towards others of their kind.

Where do lemurs live?

Lemurs live on the island of Madagascar and its surrounding islets. This island is off the southern coast of Africa. They can be found flying through the trees or, if they’re ring-tailed lemurs, living in large groups on the forest floor.

Are Lemurs herbivores, carnivores, or omnivores?

Lemurs are Omnivores, meaning they eat both plants and other animals.

What Kingdom do Lemurs belong to?

Lemurs belong to the Kingdom Animalia.

What class do Lemurs belong to?

Lemurs belong to the class Mammalia.

What phylum to Lemurs belong to?

Lemurs belong to the phylum Chordata.

What family do Lemurs belong to?

Lemurs belong to the family Lemuridae.

What order do Lemurs belong to?

Lemurs belong to the order Primates.

What type of covering do Lemurs have?

Lemurs are covered in Fur.

What is the main prey for Lemurs?

What are some predators of Lemurs?

Predators of Lemurs include hawks, fossas, and wild dogs.

How many babies do Lemurs have?

The average number of babies a Lemur has is 3.

What is an interesting fact about Lemurs?

Lemurs are natively found on the island of Madagascar!

What is the scientific name for the Lemur?

The scientific name for the Lemur is Lemur Catta.

What is the lifespan of a Lemur?

How fast is a Lemur?

A Lemur can travel at speeds of up to 12 miles per hour.