They can jump up to three feet

Click through all of our Leopard Frog images in the gallery. 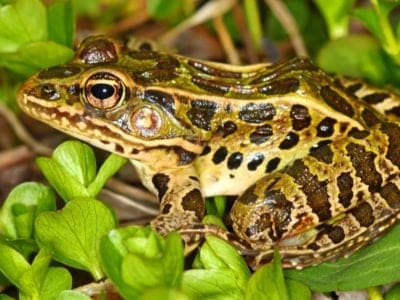 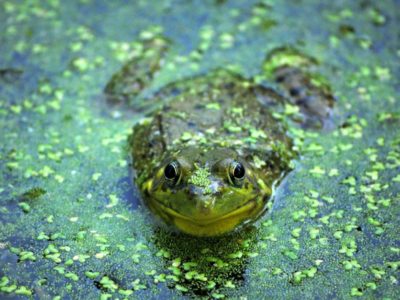 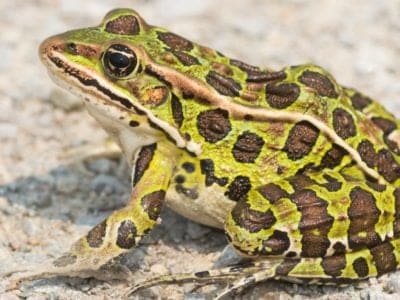 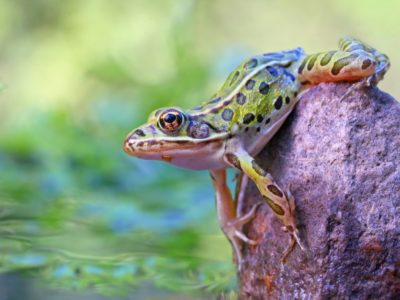 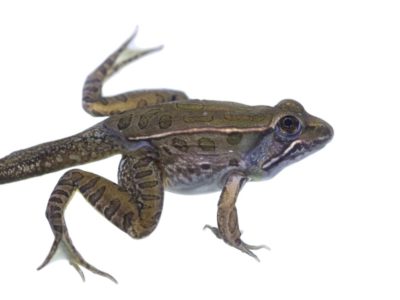 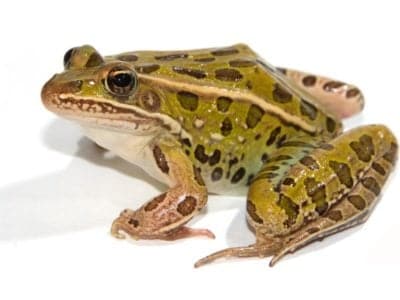 View all of the Leopard Frog images!

The scientific name for these frogs is Lithobates, which is the genus name for amphibians in the true frog family. They are in the family Ranidae, class Amphibia. They are also known as grass frog, meadow frog, or Rana pipiens. There are potentially twenty-three known species of these frog:

These frogs are between two to five inches in length and vary in color between species anywhere from dull brown to bright green, and all the shades in between, many with white underbellies. Regardless of their main body color, nearly all of these frogs have dark spots in a leopard-like pattern. They are so similar in appearance that they were believed to be all one species until they came into common use in laboratories in the 1940s, at which point scientists began to note distinct differences between the species. The female of the species is larger than the male, and southern frogs tend to be smaller than northern frogs. The tadpoles are distinguishable from other frog species because they have dorsal rather than lateral eyes and a white stripe in between their nostrils.

These frogs are solitary, coming together only for mating. They do have parental care, as the offspring are briefly cared for by the females before going off on their own. These frogs are nocturnal, semi-aquatic, and hibernate in the winter, when they may stop eating for as long as three months! The tadpoles are herbivores, but fully grown adults are carnivorous. The male’s calling noises have been likened to a snore.

These frogs divide their time between land and water. They require moisture from the water, but most of their food is found on land since they feed primarily on insects. They favor grassland that is near water. Bodies of water also allow them to escape predators more easily. They can be found anywhere from the Hudson Bay in Canada down to Mexico and even into upper South America.

While these frogs primarily feed on insects, they are opportunists and will eat whatever they can find. This may even include other leopard frogs! They have been known to consume small birds and snakes. They are somewhat lazy hunters, who tend to sit and wait for prey to come along. They then catch them with long tongues that are tacky and stick to prey to keep it from escaping before it is swallowed whole.

These frogs have many predators because they are not one of the species of frog that secretes a toxin through their skin. They are hunted by birds, reptiles, mammals like raccoons and foxes, and even other frogs. Humans are a threat to them not only because people consume frog legs, but because these frogs, northern leopard frogs, in particular, are commonly used in labs and also in classrooms for dissection, and due to habitat encroachment.

These frogs reproduce by sexual reproduction. Once a male and female mate, the female frog may lay up to 6500 eggs at one time. Depending on many factors, including weather, those eggs may take anywhere from two to four months to hatch into tadpoles and grow into adult frogs. Though adult frogs are carnivores, the tadpoles are herbivores who eat algae and decaying organic matter. These frogs generally live an average of five years in the wild, though they have been known to live as long as nine years.

The conservation status for most species of these frogs is decreasing. While there are many species of frogs that are not considered in any danger, many other species have populations that are in decline, with several species listed as endangered or even critically endangered. At least one species, the Las Vegas or Vegas Valley Leopard Frog, is listed as extinct.

Leopard frogs are carnivorous, though the tadpoles are herbivores.

What is a leopard frog?

A leopard frog is a brown or green frog with dark oval spots in a pattern that resembles a leopard. The males have a calling sound similar to a human snore.

How do you care for a leopard frog?

To thrive, a leopard frog needs adequate space, temperatures between 60-80 degrees Fahrenheit, and a habitat with both terrain and freshwater. Their habitat must be cleaned every couple of weeks and they must be fed not only insects but nutritional supplements, for growth and to protect them from disease.

Leopard frogs do make good pets, but they do require weekly maintenance on their habitat. They do not enjoy being held and they can carry salmonella, so handling should be kept to a minimum and post-handling hygiene is important.

No, nor are they venomous, but they can transmit salmonella.

How big do leopard frogs get?

Leopard frogs can grow up to five inches in length.

What does a leopard frog eat?

Can leopard frogs live with fish?

Because Leopard Frogs are carnivorous, they should not be kept with any fish that are small enough for them to ingest, but larger species of fish should be fine. They are only semi-aquatic, so they cannot be kept in a tank without an above-water land area.