Click through all of our Marine Toad images in the gallery. 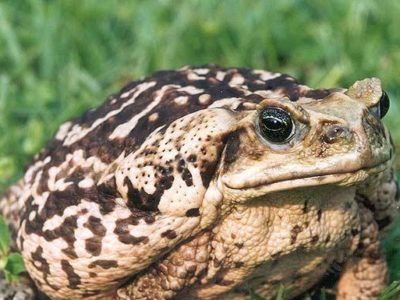 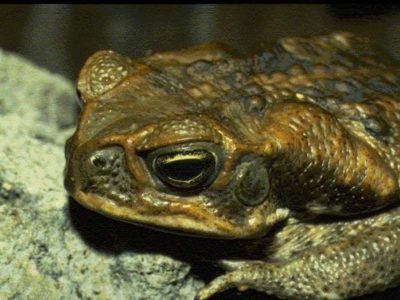 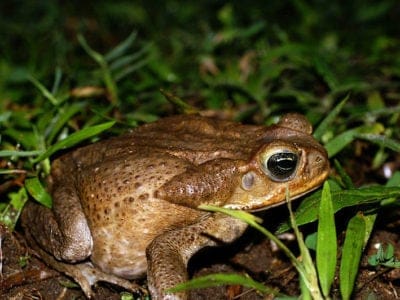 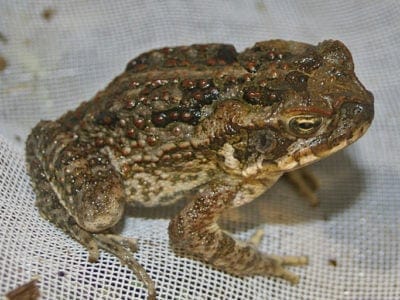 View all of the Marine Toad images!

A large female marine toad can lay a clutch (group) of eggs numbering over 40,000.

A marine toad is a carnivore that eats insects, small birds, rodents, and other amphibians. This toad grows to be four to six inches in length and weighs around two pounds. Females are normally larger than males. The average lifespan of a marine toad is five years, but it can live up to 15 years in captivity. These toads can release poison from glands located on its shoulders.

• These toads are nocturnal

• They sometimes eat dead animals (carrion) that they find

• These toads can detect moving and non-moving prey

The marine toad is sometimes called a cane toad, giant toad, or Bufo toad. Its scientific name is Bufo marinus. This name is Latin, Bufo meaning toad and marinus meaning marine. This toad belongs to the Bufonidae family and is in the class Amphibia.

These toads has brown or grayish skin covered with bumps. It has large dark eyes and parotid glands located on its shoulders. These glands release poison when the toad feels threatened.

The record for the largest marine toad is held by a marine toad named Prinsen. This toad weighs five pounds, 13 ounces and is a little more than two feet long! Just imagine two rulers you use at school lined up end to end – that’s about the length of Prinsen.

The brown skin of these toads helps it to blend in with the trees, dry grass, and other plants in its environment. This can serve as protection from predators. If a predator does find this toad, it can release a poison from glands on its shoulders. A predator can become ill or even die from the poison.

They are solitary animals. Breeding season is the only time you’ll find them living close together. This is a shy animal that wants to avoid humans and larger animals, if at all possible.

These toads live in southern parts of the United States as well as in Central and South America. In addition, they live in Australia and near some Caribbean islands.

These toads live in a tropical or subtropical climate. When the weather becomes a little cooler in these environments, these toads hide in crevices between rocks and in hollow logs to stay warm.

These toads have an annual migration in March where they go to a pond, lake, or other body of water to begin their breeding season.

What do these toads eat? The marine toad’s diet is one of the most interesting things about this amphibian. These carnivores eat a variety of things including beetles, spiders, small lizards, and salamanders. They’ll also eat dead animals left behind by other predators. Eating dead animals (carrion) is unusual for other toads.

As you’ve probably guessed, the poison released by this toad allows it to escape many predators. However, snakes, eagles, rats, and caimans are all animals that can sometimes manage to eat these toads.

As a matter of fact, some animals have developed ways to eat these toads while avoiding the poison. For example, the Australian crow kills a marine toad and quickly turns it onto its back to eat it, so it doesn’t get near its poisonous glands. The Australian tarantula as well as the common wolf spider are two other animals that have figured out how to eat these toads without taking in the poison.

The marine toad was released by scientists back in the 1930s to control the population of sugar cane beetles among other pests. Over the years, the population of these toads has actually grown to a point of causing it to become the pest! Because there are so many marine toads, they consume a lot of the smaller animals in their habitat. This leaves less food for other species of animals that share the habitat with marine toads. So, there’s now an overpopulation of marine toads in Australia, among other places.

The official conservation status of these toads is least concern.

After pairing up, a female toad lays strings of eggs in a slow-moving pond or stream. The male fertilizes the eggs and when all of the eggs have been laid, both toads move away. Neither one stays to care for the eggs.

A female toad lays an average of 30,000 eggs in one clutch (group). Instead of floating on the surface, the strings of eggs sink to the bottom of the pond or stream clinging to underwater plants. These eggs are vulnerable to frogs, fish, and other predators that swim in the water. However, because a female lays so many, there is an excellent chance that many of the eggs will survive.

It takes just three days for the marine toad eggs to hatch and take the form of tadpoles. Initially, tadpoles eat the eggs they just came out of along with algae. As they grow into young toads, they start to eat small insects. Tadpoles grow into young marine toads, or toadlets, in about 30 to 50 days. It takes a toadlet one year to grow into an adult.

An adult toad lives an average of five years in the wild. In captivity, where there are few or no predators to threaten them, they can live to be about 15. The record for the oldest marine toad living in captivity is 35 years!

The population of these toads throughout the world numbers in the millions. As an example, there are approximately 200 million marine toads in Australia alone.

The population of these toads is increasing, and its conservation status, according to the International Union for the Conservation of Nature (IUCN), is least concern.

Where does the marine toad live?

The marine toad lives in Australia, the southern part of the United States, Central America, South America and near some of the Caribbean Islands.They can survive in tropical, sub-tropical and semi-arid climates. They keep cool during the day hiding in rock crevices and inside hollow logs.

What do marine toads eat - are they carnivores, herbivores, or omnivores?

As carnivores, marine toads eat meat. Their diet usually consists of insects, lizards, and even dead animals left behind by other predators. As tadpoles, they will eat algae.

What happens if a dog licks a marine toad?

Dogs can be very curious when they see a creature like a marine toad or a western leopard toad that’s strange to them. Sometimes these toads live in areas around homes and in gardens. A dog can absorb poison from the marine or western leopard toad and become very ill.Some signs of poisoning include trouble walking, drooling, difficulty breathing, and vomiting. If you ever suspect a dog has been poisoned by a toad or by any other source, take it to the veterinarian as soon as possible.

How big do marine toads get?

The average size of a marine toad ranges from four to six inches long with a weight of around two pounds. Females are normally larger than males.Of course, there’s a record for the largest marine toad weighing in at five pounds, 13 ounces, and measuring two feet, one inch in length. Maybe that record will be broken by another marine toad one day!

Are marine toads dangerous to humans?

Yes, marine toads can be dangerous. The poison released by a marine toad is harmful to both animals and humans. If you ate one of these toads you would get very sick and maybe worse. These toads are eaten in some countries and deaths have occurred as a result.However, it is more common to be affected by touching the toad. If you pick up one of these toads, its poison can cause irritation on your skin. Furthermore, if you happened to get some of the poison in your eyes, it would be very painful and possibly cause permanent damage.

What do you do if you find a marine toad?

Considering the harmfulness of the poison released by marine toads, it’s best to avoid picking them up. If you do happen to see one, take a moment to observe it from a distance. Marine toads are some of the most unique in the world of toads and are worth learning more about! If it is in your yard and you are worried about your dog getting ahold of it, contact a professional for advice or removal.

What Kingdom do Marine Toads belong to?

What phylum do Marine Toads belong to?

What class do Marine Toads belong to?

What family do Marine Toads belong to?

What order do Marine Toads belong to?

What genus do Marine Toads belong to?

What type of covering do Marine Toads have?

What are some distinguishing features of Marine Toads?

What are some predators of Marine Toads?

Predators of Marine Toads include dogs, snakes, and birds.

What is the average clutch size of a Marine Toad?

What is an interesting fact about Marine Toads?

What is the scientific name for the Marine Toad?

The scientific name for the Marine Toad is Bufo Marinus.

What is the lifespan of a Marine Toad?

How fast is a Marine Toad?

A Marine Toad can travel at speeds of up to 5 miles per hour.