Marsh frogs are the largest frogs that are native to Europe.

Click through all of our Marsh Frog images in the gallery. 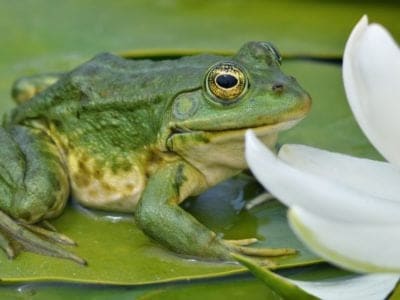 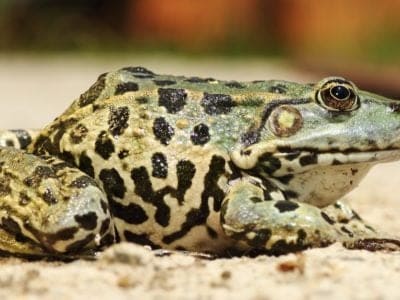 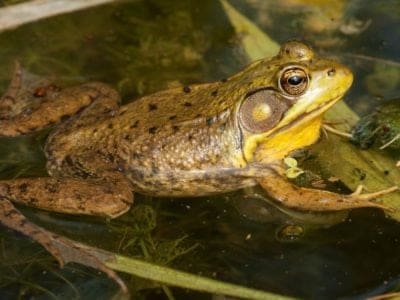 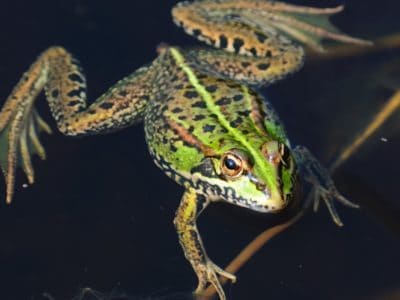 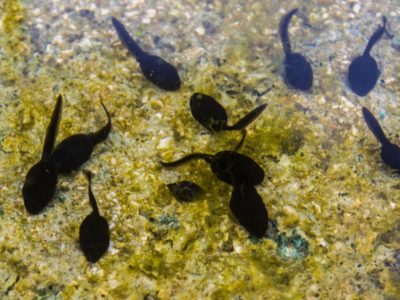 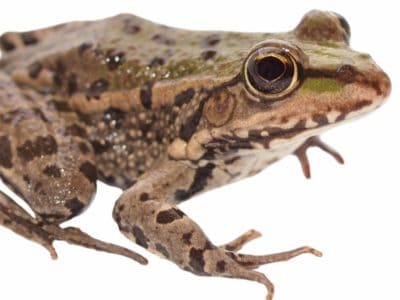 View all of the Marsh Frog images!

“Marsh frogs are the largest frogs that are native to Europe”

Marsh frogs live in areas across Europe and parts of Russia as well as in regions of Saudi Arabia. They are carnivores eating a diet of flies, worms, slugs, spiders, and dragonflies. These frogs are excellent swimmers and expert jumpers. They have slick dark green, brown, or gray skin featuring a striped or spotted pattern. One particular call of this amphibian has earned it the nickname, ‘laughing frog.’

The scientific name of these frogs is Pelophylax ribundus. The Greek word Pelophylax breaks down to mud (pelos) and sentinel (phulax). The Latin word ribundus means laughing. In fact, laughing frog is one of the alternate names of this amphibian.

It belongs to the Ranidae family and the class Amphibia.

There are six hybridogensis of this frog including:

The slippery skin of this frog can be brown, gray, or dark green. It can be striped or spotted with eyes on top of its head. Males grow to be an average of 4 inches long while females are about 4.03 inches long. Some of the largest marsh frogs can reach 7 inches in length! Both males and females weigh from .4 to .5 ounces. Think of a bowling pin divided into four equal parts. One of those parts is equal to the length of a 4-inch marsh frog. A marsh frog weighing .5 ounces is about the same weight as one AA battery.

Pool frogs are similar to marsh frogs. They have a similar call and are carnivores. However, pool frogs are smaller and have dark brown skin with black splotches.

The long back legs of these frogs help to make it a great jumper. Its webbed feet give it the ability to expertly swim through the water. Its speed can help this frog to escape predators. Plus, the dark color of its skin allows this amphibian to blend in with its swampy habitat.

They are social creatures. A group containing dozens of frogs is called an army. They are non-aggressive except when males are competing with other males for territory.

These frogs live throughout Europe and Asia. They can be found in parts of Russia and Saudi Arabia. The habitat of the frog includes lakes, drainage channels, ponds, rivers, and streams. Of course, they also live in marshes! These amphibians are in the water most of the time, but can also be seen sunbathing on the shore.

These frogs go into hibernation during the winter months. They burrow into the mud at the bottom of a creek, lake or pond. While they are hibernating, these frogs have an increased level of glucose that prevents them from freezing as the temperature drops. Think of the glucose in a frog’s body as its personal supply of anti-freeze!

In the springtime, the frogs migrate from the deep water in a lake or pond, to an area with shallow water in order to find a mate.

Some of the predators of these frogs include herons and other birds as well as snakes, large fish, lizards, and raccoons.

What do marsh frogs eat?

The diet of the frog includes flies, spiders, worms, slugs, and dragonflies. Some of the larger frogs of this species are able to eat smaller frogs and even mice. These frogs eat an amount of food equaling 10 to 20% of their body weight.

Pool frogs have a similar diet of spiders, flies, and worms.

Herons, snakes, raccoons, lizards, and fish are all predators of these frogs. As you see, most of its predators have easy access to the watery habitat of this amphibian. A heron can wade through the water and grab a marsh frog with its long beak. Many snakes can swim making it easy to move quickly through the water to capture marsh frogs.

Raccoons like to hunt for prey by wandering along the shores of lakes and streams. This is where they are likely to catch a marsh frog that’s sitting on the shore.

According to the IUCN Red List of Threatened Species, this frog seems to be very resistant to environmental pollution. In fact, populations of this frog are known to live in polluted waters.

Marsh frog populations in Turkey are caught for food. Frog legs anyone? This is a threat to frogs living in that region.

The official conservation status of marsh frogs is Least Concern with an increasing population.

The breeding season of the marsh frog takes place in early spring. Males try to get the attention of females using a distinct call. After pairing up, a female lays up to 1,000 eggs in a shallow area of water. Eggs are laid in a floating mass that usually attaches itself to plant life in the water. Many frog eggs are eaten by birds, fish, and small mammals like raccoons. Frogs lay a lot of eggs to increase the chances that at least some of their young will make it to adulthood. The eggs hatch in 6 to 21 days. Frogs have different partners every breeding season and have nothing to do with caring for the eggs.

Marsh frog babies, aka tadpoles, can grow to be 7.32 inches long. After hatching, the tadpoles eat their egg sac for nourishment. As the tadpole grows, it starts eating particles of algae and even dead insects. It takes 12 to 16 weeks for a tadpole to grow into an adult marsh frog with a striped or spotted pattern. This is called metamorphosis. Once the tadpole’s tail shrinks to a tiny stub, it is known as a froglet.

Marsh frogs can live as long as 10 years in the wild.

Though the exact number of these frogs is unknown, biologists consider their population to be abundant. Officially, their conservation status is Least Concern with an increasing population. These frogs are protected by law in many countries.

A marsh frog is a carnivore eating mostly insects including dragonflies, spiders, worms, and slugs. Some of the larger marsh frogs eat mice and smaller frogs.

What Kingdom do Marsh Frogs belong to?

What phylum to Marsh Frogs belong to?

What family do Marsh Frogs belong to?

What order do Marsh Frogs belong to?

What genus do Marsh Frogs belong to?

What type of covering do Marsh Frogs have?

In what type of habitat do Marsh Frogs live?

What is the main prey for Marsh Frogs?

What are some predators of Marsh Frogs?

Predators of Marsh Frogs include fish, toads, and birds.

What are some distinguishing features of Marsh Frogs?

How many eggs do Marsh Frogs lay?

What is an interesting fact about Marsh Frogs?

What is the scientific name for the Marsh Frog?

How fast is a Marsh Frog?

A Marsh Frog can travel at speeds of up to 5 miles per hour.

Like most frogs, marsh frogs have a variety of calls. For instance, some of the calls are used during the breeding season to attract a mate while others are used to alert other frogs of a nearby predator. However, they have a particular call that sounds like laughing. This has earned them the name, ‘laughing frog.’ They have another notable call that sounds like quacking!

How do you get rid of marsh frogs?

These frogs are plentiful in Europe. As a result, they are considered a pest in some areas. Moving these frogs out of a home’s fish pond or pool is going to be a difficult task because once they reproduce there will be many, many more.

So, making the environment less appealing is a good way to get rid of them. One way to do that is to have a dog or cat roam the area. A marsh frog is not likely to stay in an area with dogs and cats nearby.

Removing weeds, fallen logs and piles of leaves from around a fish pond is another way to discourage marsh frogs from hanging around. Weeds, logs, and leaves are all places that these frogs like to hide.

How long do marsh frogs live?

Most marsh frogs live to be around 5 years old. But they can live as long as 10 years.

How big are marsh frogs?

Marsh frogs are known as Europe’s largest native frogs. Male frogs usually grow to be about 4 inches long while females are larger at 4.3 inches long. However, these frogs have been known to reach 7 inches in length!