The mink can swim up to 100 feet underwater.

Click through all of our Mink images in the gallery. 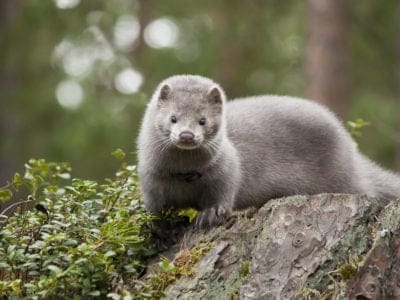 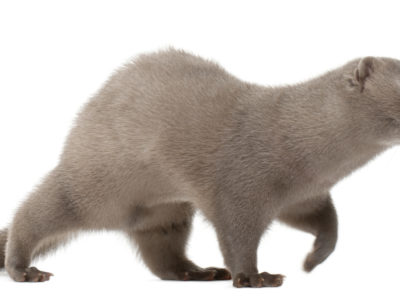 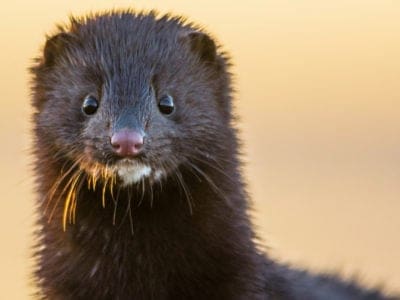 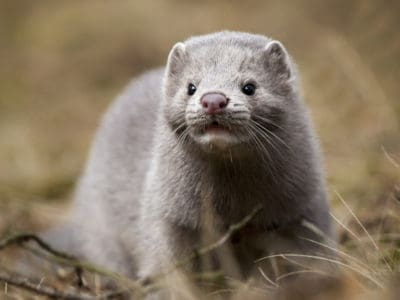 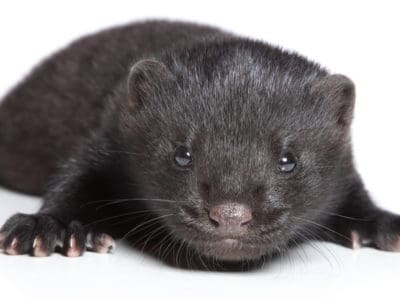 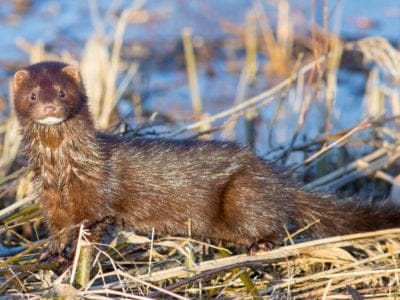 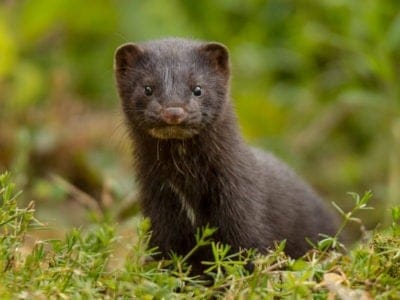 View all of the Mink images!

The mink is a semi-aquatic relative of the weasel.

It is a proficient swimmer, a territorial neighbor, and a surprisingly tenacious predator. This animal may not look like much of a fighter, but the mink can take down prey that’s almost as large as itself. Even large predators must be careful about how to approach this rather tetchy animal. Because it spends a great deal of time in the water, the mink has a water-repellent coat laced with oil. Its fur is considered to be such high quality that the mink has remained a vital part of the fur trade for centuries. It is still raised in captivity all over the world.

There are currently two recognized species alive in the world today. Mustela lutreola, or the European mink, is actually part of the same genus as the weasel, while Neovison vison, or the American mink, is the only living member of its genus. Both species were once classified within the genus Mustela, but taxonomists believed that the American mink exhibited enough differences to warrant a separation genus classification. There used to be two members of the genus Neovison, but the sea mink, or Neovison macrodon, was driven to extinction in the early 20th century.

The genus names Neovison and Mustela have entirely separate origins. Neovison can be broken down into the words neo (Greek for new) and vison (French for a marten or weasel), while Mustela is simply the Latin word for weasel. Both species belong to the family of Mustelidae along with the badgers, wolverines, and otters. In fact, this creature is often mistaken for an otter, because they share a very similar semi-aquatic habitat and lifestyle to each other.

The mink is an animal that looks very similar to the closely related weasel or marten. It has a long, lithe body, a pointed nose, rounded ears, short legs, and webbed feet. The thick water-repellent oiled coat of fur is dark brown or black in color (though albino and tan mutations do occur in the wild). Most members of the European species have white markings on the chin and lips with additional white spots on the throat, stomach, and chest, whereas only some members of American species exhibit the same markings. If the specimen lacks white markings entirely, it is almost certainly an American mink. The outer layer of the coat, which consists of guard hairs, is three times as dense as the fur of the closely related ferret. Each guard hair is surrounded by numerous smaller hairs as well.

The American is generally the larger of the two species. It weighs 1.5 to 3.5 pounds and reaches 18 to 28 inches long (with half of that just being the tail). The European, on the other hand, weighs 1 to 1.6 pounds and measures 12 to 15 inches long. Both species are significantly smaller than the otter but about the same size as a ferret. Females tend to be smaller than males on average.

The mink’s entire lifestyle revolves around the ability to switch between terrestrial and aquatic motion at any time. With its incredible webbed feet, the mink is fast and agile animal in the water. It can swim to depths of 100 feet but almost never ventures far from land. Unlike the closely related otter, the mink swims high on the surface and creates a V-shape wave with its nose. When it isn’t in the water, the mink walks on the ground with a hopping or bounding motion. It can also climb trees to chase prey or escape danger.

The mink is what’s known as a crepuscular species. It is highly active during the dawn and dusk hours as it searches of prey. It also tends to spend the rest of the night awake in some capacity. Except for the relationship between the mother and her kits, the mink is an animal with no social organization to speak of. Instead, it lives and hunts almost entirely on its own and only tolerates the presence of other minks in the breeding season.

The mink is very aggressive toward other members of the species who trespass on its territory. Males are especially vicious toward other males who have nothing to offer them except for additional competition. Males are usually much more tolerant toward females. In fact, male and female territories sometimes overlap with each other.

The mink is split geographically between North America and Europe. The American mink has an extensive range across almost all of Canada and the United States except for the extreme Arctic regions and the hot Southwest. The European mink once occupied a massive range across almost all of Europe, but due to decades of population loss, it is now only found in small pockets across its former territory. It is almost completely gone from Western and Central Europe.

Minks are well-adapted to lakes, ponds, rivers, and streams with extensive tree cover. Their homes consist of hollow legs or underground dens lined with grass, leaves, or the fur of their prey. The mink often keeps multiple dens around its large territory.

This creature is a very agile hunter, sometimes capable of killing animals larger than itself, but it is not an apex predator. Several other carnivores reside above it on the food chain.

What does the mink eat?

These animals will hunt almost any small- to medium-sized prey that lurks around freshwater shores: mice, rabbits, muskrats, fish, frogs, snakes, crayfish, and even water fowl. Sometimes they supplement their diet with little bits of plant matter as well. Their main hunting strategy is to get behind its prey and deliver a swift bite to the neck. If the animal is simply too large to consume in one meal, then the mink will store the leftover meat in its den for safekeeping.

What eats the mink?

Minks make a tempting meal for all kinds of large predators such as coyotes, bobcats, wolves, foxes, and horned owls. Despite their ferocity, many will eventually fall victim to predators before they can die of natural causes.

At the end of the gestation period, the female produces a small litter of one to eight kits. Since the kits are completely dependent and vulnerable (it takes several weeks before they will open their eyes), the mother must provide for their care without any assistance from the father. The kits are weaned off their mother’s milk at six to 10 weeks of age and shortly after begin consuming meat. Both species reach sexual maturity at 10 to 12 months, but it takes the American mink slightly longer than its European counterpart to achieve full independence. Both species live around 10 years in the wild.

The American mink is classified as a species of least concern: the healthiest possible classification. The European mink, on the other hand, is now critically endangered. Several explanations have been offered to explain the sudden population decline, including habitat loss, overhunting, decline of prey animals, and competition with the similar American mink, which escape from farms and invade local habitats. The American mink is more aggressive and adaptable than its European counterparts, and so it often ends up displacing it from the ecosystem.

All efforts to save the European mink from extinction may require conservationists to reduce the number of American minks that occupy the same territory. Unfortunately, the American mink is quite intelligent and resourceful and has so far resisted many efforts to trap them. Another problem is that, without an understanding of how to survive in the wild, many of the European minks raised in breeding programs and later released have often ended up dead.

As conservationists learn from these experiences and develop better strategies, they hope to reintroduce the European mink into its former territory by seeding Europe with small founding population everywhere. Frozen semen is sometimes used to improve genetic diversity.Mink FAQ

What is a mink?

The mink is a semi-aquatic member of the family Mustelidae. It is sometimes confused for other closely related species, but the mink can usually be distinguished by its webbed feet and unique swimming pattern.

What's the difference between a mink vs. ferret?

The ferret and mink have similar body shapes. The main difference is their lifestyle and habitat. The ferret is well-adapted for land, while the mink is semi-aquatic. You can easily tell them apart at a glance because the ferret has some combination of black, white, and grey fur.

What's the difference between a mink vs. weasel?

The mink and weasel are closely related to each other: so much so that both animals have a very similar body shape. But the mink is distinguished from the true weasel by its aquatic lifestyle, webbed feet, and darker oiled fur.

While the sharp teeth and claws can cause some injury, the mink poses no threat to humans. If it’s approached by a person, then the mink is almost certainly likely to run away. But if you happen to see an injured mink, then you should call a local wildlife service and try not to handle it yourself unless absolutely necessary.

Are Minks herbivores, carnivores, or omnivores?

Minks are Carnivores, meaning they eat other animals.

What Kingdom do Minks belong to?

Minks belong to the Kingdom Animalia.

How fast is a Mink?

A Mink can travel at speeds of up to 4 miles per hour.