A Morkie puppy can weigh as little as 4 ounces.

Click through all of our Morkie images in the gallery. 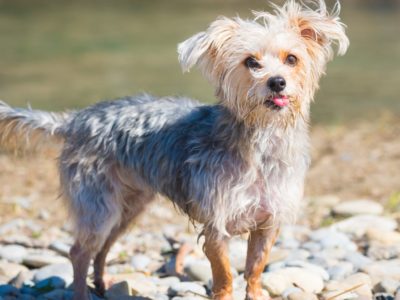 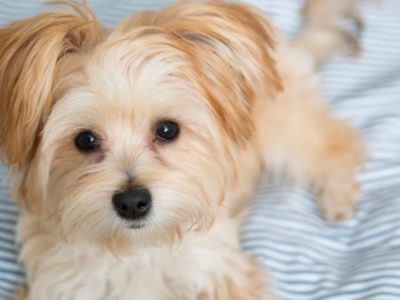 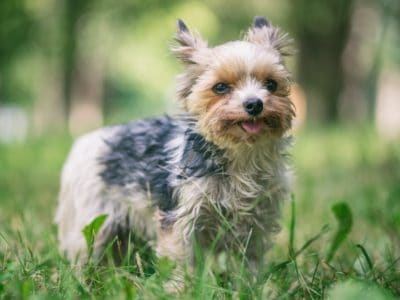 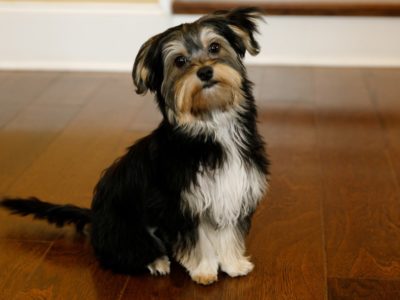 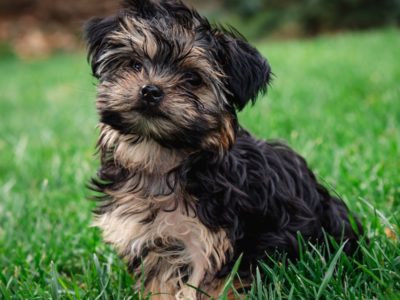 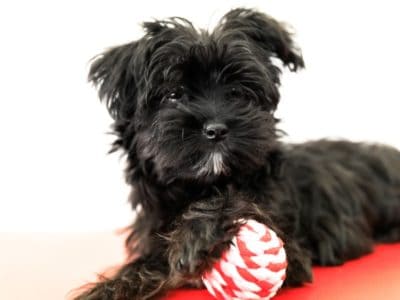 View all of the Morkie images!

Cuteness must be exponential because when you cross an adorable Yorkshire terrier with a loveable Maltese, you get a Morkie, which is ten times cuter than either of its parents. With its tiny size, its big, soulful eyes, and its long silky coat, a Morkie resembles a stuffed animal magically come to life. Other names for this hybrid breed include Morkshire terrier, Yortese, Maltiyork, Malkie, Malki, and Yorkiemalt. Morkies are recognized by the American Canine Hybrid Club, the Designer Dogs Kennel Club and the Dog Registry of America.

Despite their small size, Morkies have big personalities. They’re fiercely loyal to the humans they love to the point of suffering severe separation anxiety when they’re parted from you. They’re so easy to fit into a purse, though, that there’s practically no reason not to take them with you everywhere you go. Morkies don’t shed a lot, so they’re considered hypoallergenic. If you or a family member suffers from allergies, this may be the hybrid dog for you.

Morkies are a separate hybrid breed from the Morkie poo. The Morkie poo is a hybrid dog descended from Yorkie, Maltese, and Poodle breeds. The Morkie poo tends to be a bit smaller than the traditional Morkie, and the breed often exhibits a curly, frizzy coat like its poodle forbearer.

3 pros and cons of owning Morkie

Morkie puppies can weigh as little as 4 ounces when they are firstborn. Full-grown toy Morkies grow to a height between 6 and 8 inches and a weight between 4 to 7 pounds. Full-grown teacup Morkies are even smaller than that. In both the toy and the teacup variety of Morkie, males are slightly larger than females.

A healthy Morkie will typically live between 10 and 16 years. These adorable dogs are associated with a number of well-known health problems, though. Yorkshire terriers are particularly prone to collapsed tracheas, and your Morkie may inherit this issue from its Yorkie parent. Symptoms of a collapsed trachea include chronic, intermittent bouts of coughing that exacerbate with activity or any type of stress. This condition may make your hybrid dog susceptible to respiratory allergies.

Small breeds like Yorkies and Maltese are also at higher risk than the general canine population for a condition called congenital portosystemic shunt, which is an abnormal connection between systemic circulation and circulation to the liver. Other health issues confronting Morkies include hypoglycemia and slipped knee joints (patella luxation). Teacup Morkies are affected more by adverse health conditions than toy Morkies because teacups are more inbred. Reputable breeders will invest in genetic testing for all the hybrid breeds they work with, so if you’re shopping for Morkie puppies, this is one more reason to confine your search to breeders you can trust.

Health and Entertainment for your Morkie

What Morkies lack in size, they make up for in energy. These dogs have an extremely playful temperament and will dash around your house or yard like mad every time you throw a ball. Their personality can be a bit feisty at times, and stubbornness is a behavior you have to watch out for. Consistent training is the best remedy for any willful character traits your dog may manifest.

Morkies want to be with the one they love. You can count on your Morkie to crawl up into your lap every time you sit down. Overly dependent behavior can be a personality issue with both parent breeds, which is a trait your Morkie may inherit. It may be tough to draw the line with your Morkie. He or she is so adorable! Indulging your pet completely, though, can lead to serious behavioral issues like separation anxiety down the line.

How To Take Care of Morkies

Morkies are known to be smart but willful, and this means that training is likely to require a lot of time and patience. Other factors Morkie owners need to be aware of include the hybrid breed’s specific dietary, grooming, and exercise needs.

Because they are such tiny dogs, Morkies can put on weight quickly if they’re overfed. They should be fed a high-quality kibble with a minimum protein content of 18% that’s specifically formulated for small dog breeds. The exact amount you feed your dog will depend upon your Morkie’s age, size, and activity levels but divide feedings up into at least two meals a day to prevent hypoglycemia.

Morkie puppies need to be fed three or four times a day. The optimal food for these puppies is a kibble specially formulated for puppies with a minimum protein content of at least 22% that contains omega fatty acids to help keep his or her coat gorgeous and silky.

Morkies should be bathed once a week with high-quality shampoo and conditioner. Special attention must be given to keeping your Morkie warm while his or her coat is drying since these dogs dislike feeling cold. You’ll need to brush your pet’s teeth daily, and trim his or her nails as necessary.

Once your Morkie is full grown, you may want to initiate monthly visits to a groomer.

Patient, consistent training is extremely important with Morkies. They’re intelligent enough to learn commands and tricks easily but just hardheaded enough to insist upon learning on their own terms. Additionally, some Morkies inherit aggressiveness from their parent Yorkie line. Yorkshire terriers, you may remember, were originally bred to hunt rodents.

It’s important to start training your Morkie puppy as soon as you get him or her home. Like all dogs, Morkies respond best to positive reinforcement; in fact, if you try to use harsh training methods with them, they are likely to balk and become completely uncooperative.

Morkies are very energetic, but their tiny size means that their activity needs can often be satisfied with a brisk trot around the block twice a day. Morkies also like to play so make some time to join your pet in a spirited romp at least once a day.

The look of first-generation Morkie puppies can be completely unpredictable since it’s impossible to predict whether Yorkshire terrier or Maltese genetics will dominate. Some breeders have begun mating Morkies to other Morkies to standardize the look of this breed. Litter sizes range between two and five pups. Morkie puppies are quite tiny when they’re born, only weighing a few ounces. Great care must be taken in handling these tiny adorable creatures since they’re so fragile.

If you don’t want to go through the hassle of training a Morkie puppy, you may also be able to find a Morkie through one of the many Yorkie and Maltese rescue organizations nationwide. Adult Morkie rescue dogs make excellent pets.

Morkies and kids love each other. Nevertheless, it’s probably smart not to introduce a Morkie into a household where there are children younger than 10. Younger children, even when they’re on their best behavior, may play too roughly for a fragile Morkie and hurt the dog without intending to.

Dogs similar to the Morkie

Maltipoos, Shih Tzus and Bichons Frises share many traits in common with the Morkie.

Famous celebrities love their Morkies! Emmy Rossum, Hilary Duff, and even Drake are all proud Morkie owners and document their pets’ adventures on Instagram. Miley Cyrus was a Morkie owner, too, once upon a time, but sadly Miley’s Lila came to a tragic end when Miley’s bigger dog, Ziggy, accidentally stepped on her.

Popular names for your Morkie include:

How much do Morkies cost to own?

The price of a Morkie puppy will range between $850 to $3,700, depending upon the breeder you purchase from. Morkies are among the most popular of the designer hybrid breeds, and the high price tag per puppy reflects that. You can defer that cost by adopting an adult Morkie from a dog rescue organization.

Other costs you are likely to incur when you first get your dog include microchipping, neutering, vaccinations, crates, collars, bedding, bowls, and toys, which will add up to $500 or so. Thereafter, you can expect to spend around $1,000 a year on your Morkie’s food, medications, training, grooming, and treats.

Are Morkies good with kids?

Morkies are good with kids. The real question is: Are kids good with Morkies? The answer is probably not till they reach the age of 10 or so.

How long do Morkies live?

Morkies live between 10 and 16 years.

What is a Morkie?

A Morkie is a hybrid dog bred from Yorkshire terrier and Maltese lines.

Morkies are not big shedders, so they make good pets for people with respiratory allergies.

Is a Morkie a good dog

With the proper training, Morkies can be very good dogs.

How much does a Morkie cost?

A Morkie puppy costs between $850 to $3700. The price of adopting an adult Morkie from a rescue organization will be considerably less than that.

Morkies can be aggressive. They inherit this tendency from their Yorkshire terrier ancestors. With proper training, however, Morkies can be taught to control the aggressive aspects of their temperament.