The ancestors of the Pomeranian were sled dogs.

Fun Fact
The ancestors of the Pomeranian were sled dogs.
Diet
Omnivore

Click through all of our Pomeranian images in the gallery. 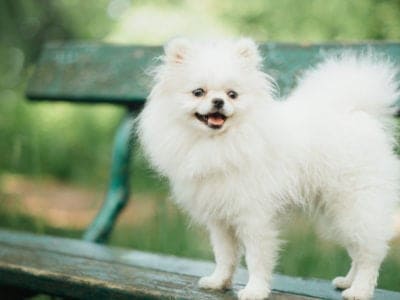 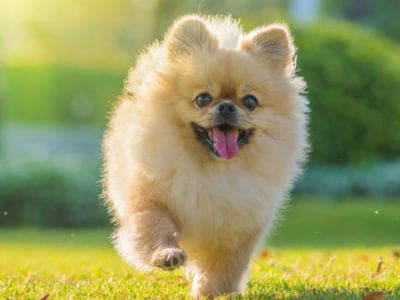 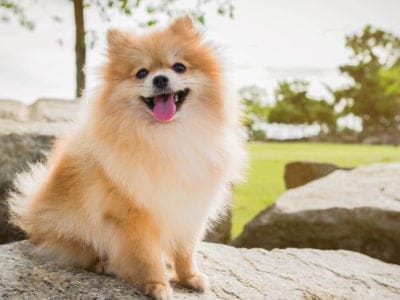 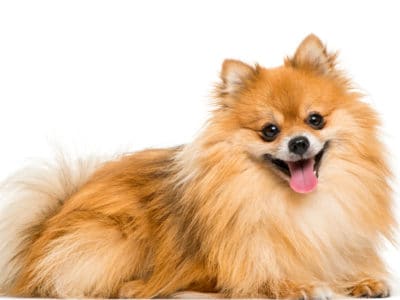 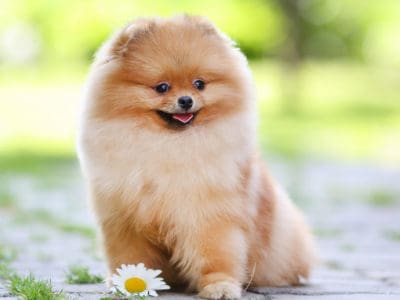 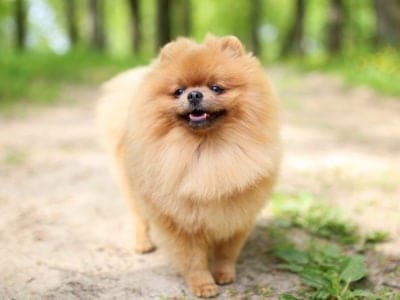 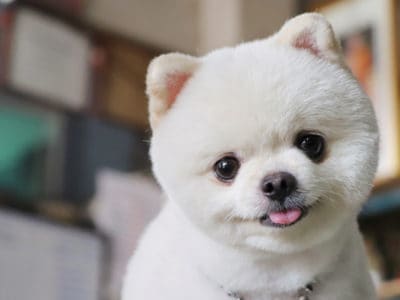 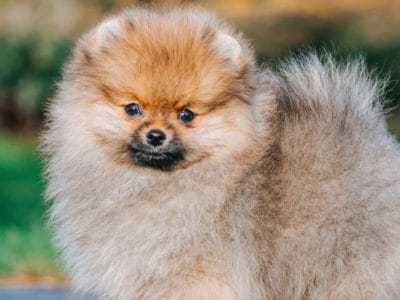 View all of the Pomeranian images!

The Pomeranian, or the Dwarf Spitz, is a toy dog, only weighing about 7 lbs. at its heaviest. Their family lineage doesn’t follow that of terriers or other small breeds, coming from sled dogs instead. The only reason that the Pomeranian is this size is due to Queen Victoria of England’s demand to make them smaller as a lapdog. The miniature variation of this breed emerged at the start of the 1990s, though it is not recognized by the AKC as an official breed.

3 Pros and Cons of Owning a Pomeranian

Pomeranians used to be large like sled dogs, but they are now known for their short build. The average dog of this variety, whether male or female, measures 7-12 inches tall and weighs 3-7 lbs. While the male is a little larger, it is primarily due to muscle mass.

The teacup Pomeranian is much smaller. Any Pomeranian under 3 lbs. is not technically recognized by the AKC, since they are a teacup spitz.

Pomeranians are fairly healthy, but they can be prone to certain health conditions. The most common issue is the luxating patella, which is the dislocation of the kneecap. If the dog starts to only walk on three of his legs, that’s a good sign of this problem.

Tracheal collapse is common as well, preventing the dog from breathing properly. If this issue occurs, veterinarians can treat it with corticosteroids and cough suppressants. This issue is more common in dogs that are obese.

While it isn’t quite as common, Pomeranians have a greater likelihood of developing Alopecia X than other breeds. Sometimes referred to as “black skin disease,” Alopecia X causes hair loss, though it doesn’t result in inflammation.

The leading causes of death among adult Pomeranians typically involve their gastrointestinal tract. They can fall victim to problems like inflammatory bowel disease (which reduces nutrient absorption) and lymphangiectasia (leakage in the intestines).

Sadly, the most common reason for the death of a Pomeranian puppy is physical trauma.

Any micro or mini Pomeranian could be prone to different health issues, but they are not well-documented. Some of the common conditions that pet owners should watch for include:

Part of the reason that the Pomeranian is so loved is due to their smart and curious personality. They love to play with their owners, though they may struggle to share the attention they receive with other dogs or people. Their territorial nature is one of their more popular traits, and this possessiveness can leave them to become aggressive when eating. These tendencies are further amplified with the teacup (or micro) Pomeranians, feeling the need to prove their big personalities.

Pomeranians are rather yappy, barking frequently at strangers and anything else they may want to assert their dominance over. Training them to quiet down on command can be incredibly useful since their aggressive behavior towards other animals should not be allowed to flourish.

How To Take Care of Pomeranian

Taking on any new pet requires dedication to their health and happiness. Apart from yearly veterinary exams, here are a few ways that Pomeranians should be cared for daily.

Health and Entertainment for your Pomeranian

Pomeranians need to have dry dog food with small pieces, as they are easier for the pup to chew up with their small mouths. The micro dogs can eat rather quickly, and the small pieces reduce their risk of choking. High-quality food is necessary since they need a lot of protein to sustain their bodies.

Though other dogs need to be fed in individual meals, Pomeranians can be left with the same bowl of food throughout the day as they free-feed.
Canned food is also important, though users need to follow the same protein requirements. It can be added to dry food or separately added to the diet. Avoid spicy food or meals with a lot of salt, as these dogs have rather sensitive stomachs.

The average Pomeranian pup needs daily brushing to reduce tangles and to keep its coat looking soft and fluffy. They have a double coat with the harshest texture on the outside, so they need to be bathed on occasion.
Like other breeds, their grooming should include nail care and ear cleaning. However, most groomers are familiar with all of the pampering that these fancy lapdogs need.

As intelligent as Pomeranians can be, they are incredibly obstinate, so they can take a little extra effort to train. Most trainers focus on positive reinforcement to get their attention, using a clicker or a clicking sound when they follow the commands given to them.

To improve the odds of housetraining your dog effectively, a crate or other bed gives them a safe place to call their own.

Pomeranians need regular exercise to keep their body healthy. Take them on regular walks in comfortable weather and provide them with toys to engage their mind and body while inside.

Even with regular exercise, these dogs don’t do well outside for extended periods of high temperatures. If the dog’s tongue becomes bright red or they begin to pant a lot, it’s a good sign that they are nearing a state of heatstroke. They are equally sensitive to colder weather as well, so they need ample space to exercise indoors.

Puppies require much more attention than adult Pomeranians. Any puppy under about 6 months old should be fed three separate meals, rather than being allowed to free-feed throughout the day. Their small bodies can put them at risk for hypoglycemia with the speed at which they use their energy from the food that they eat.

A Pomeranian puppy should also have a steady supply of water.

As stated above, Pomeranians make excellent family dogs, and they are playful with older children, adults, and even senior citizens. However, their size may lead smaller children to see them as more of a plaything than a living and breathing member of the home. Individuals that have small children should either supervise the interactions closely or choose another breed.

If a Pomeranian isn’t the right dog for you, many dogs have similar sizes, personalities, and other traits. Take a look at these breeds for alternative options:

Queen Victoria of England is perhaps one of the most famous Pomeranian owners, and she is responsible for breeding them to their mini size after bringing one home from Italy. As the breed became smaller, Pomeranians have become a beloved breed among many, including Sir Isaac Newton and Mozart. In more recent history, Nicole Richie and Sharon Osbourne both own the breed as well.

Pomeranians have been seen in many movies and television shows as well, including Dumb and Dumber, Cadillac Man, To Die For, and Harlem Nights. The most famous dog of this species is an orange and white Pomeranian named Jiffpom, and he currently has over 9 million followers on Instagram alone.

Here are some popular names for Pomeranians:

Pomeranians can be excellent companions for families of all sizes. However, due to their energetic and feisty personality, families with young children may not be the right match.

While the average Pomeranian is a bit high-maintenance, their lively personality makes up for it greatly. They need regular brushing to maintain their thick, double-layered coat.

Without proper training, Pomeranians (especially the mini versions of the breed) may become aggressive. They are distrusting of new people, and they easily feel intimidated by animals and humans that are larger than them. While they may seem cute, this aggression can lead to biting.

How much does a Pomeranians cost?

For a purebred Pomeranian, the price is usually as low as $500 and as high as $1,500 for adoption fees. Lower prices are generally available within shelters and rescues, but puppies can cost as much as $3,000. Black Pomeranian puppies have the most expensive price, due to their special breeding.

Are Pomeranians good with kids?

While Pomeranians may be good with older children, families with smaller children may want a more kid-friendly puppy.

How long do Pomeranians live?

On average, a Pomeranian may live as long as 16 years.

How do you groom a Pomeranian?

Though taking a Pomeranian to a groomer is often the easiest way to keep them clean, most of the grooming that owners should focus on will be brushing them. Brushing daily will remove hair that was shed, while regular baths each month will remove any dirt or debris that accumulates in their coat.