Fun and sociable, yet stubborn!

Click through all of our Pug images in the gallery. 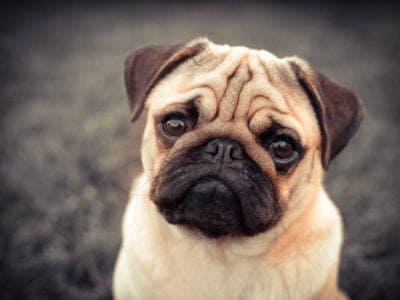 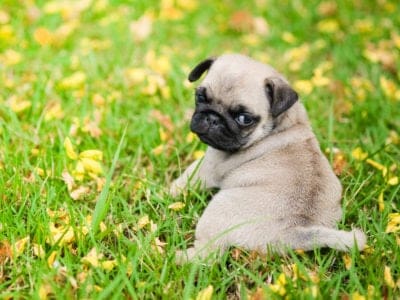 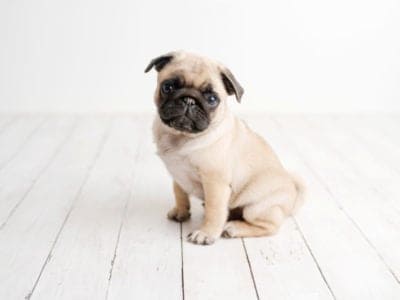 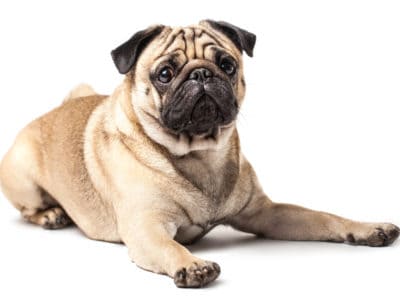 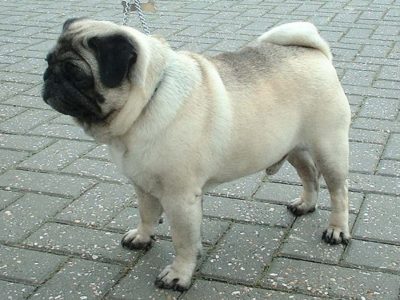 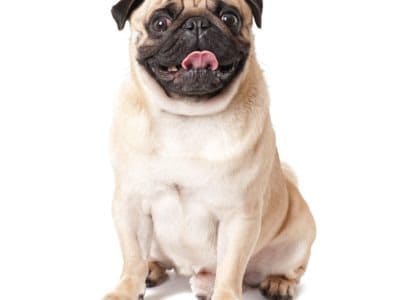 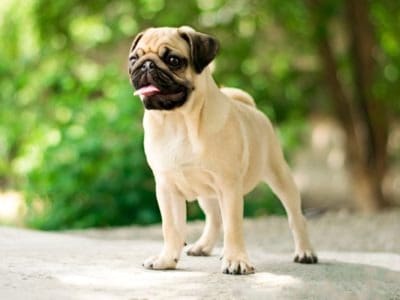 View all of the Pug images!

What many people don’t realize, however, is that this somewhat goofy-looking breed also has a long and illustrious history that intertwines with human royalty around the world. The pug originated in China more than 2,000 years ago. It was a common pet of the royal families in China and Buddhist monks in Tibet. The pug was then brought from China to Europe in the 16th century and became the official dog of the House of Orange, the ruling family of the Netherlands.

According to the American Kennel Club, the pug is the 28th most popular breed in the United States. This is perhaps because it has many appealing qualities that make it a good companion, including its expressive face, its gentle nature, and its friendly demeanor. It comes in several distinct variations: fawn, silver, apricot, and all black. The ears can be either rose style, meaning small and folded against the head, or the standard button style.

3 Pros and Cons of Owning a Pug

The pug is a small toy dog with a rather square, compact body, strong, straight legs, and a very short curling tail. Here is a more precise breakdown of the size:

The pug’s unique square appearance is one of the most attractive and appealing qualities of this breed, but it is also the source of its greatest health liability. The prominent brow ridge makes it vulnerable to bulging eyes and scratched corneas, while the flat snout sometimes causes breathing problems and airway obstructions.

Because the pug has some difficulty panting, the airway problems make it very difficult for this breed to regulate high body temperatures. That means when it’s particularly hot out, the pug may not be able to work off the excess heat, putting its health in danger. This is why you should strive to keep the pug cool and comfortable at all times, especially in warmer climates.

The smaller airway will also sometimes cause a condition known as reverse sneezing in which it appears to gasp and snort. This is generally not harmful to the dog but may cause it minor distress. Other common health problems include obesity, cancer, skin problems, and hip dysplasia (a genetic condition that causes the hip joint to develop abnormally, possibly resulting in lameness and limping). To sum up this breed’s most common health problems:

Health and Entertainment for your Pug

The pug’s personality is sometimes described with the Latin phrase “multum in parvo,” which means a lot in a little. This phrase refers to its strong-willed and charismatic personality, bolstered by its huge range of almost human-like facial expressions. The pug was bred as a small, lovable companion and therefore seems to have a natural insight into the mood of its owners. This makes it a very good pet that can adapt to many different living situations. It just wants to spend as much time as it can with its owner, whether that means playing, exercising, or just lounging around the house. Learn about the best dog breeds for city living here.

How to Take Care of a Pug

The pug is a good breed for any pet owner who doesn’t have a lot of time for care. Although you should attend to its brushing, exercise, and specific dietary needs, the pug does not require constant maintenance and work like some breeds do. If you get a dog from a young age as a puppy, then you will likely have the best outcomes in terms of training and socialization.

Because of its many potential health concerns, the pug requires high-quality dog food with a particular emphasis on a healthy lifestyle. Puppies need about a cup of food per day, while a fully grown pug needs about one and a half cups. You can also give it treats from time to time to reinforce its obedience training. But because of its tendency to overeat and gain weight, you should always keep an eye on the calorie consumption of your dog. Be prepared to cut back the calorie intake if it appears your dog is beginning to pack on the pounds. Obesity could seriously reduce the dog’s quality of life and overall health.

The pug has a short, glossy coat of fawn, silver, or black fur that requires semi-regular maintenance perhaps once a week with a medium-bristle brush and a mitt or glove. Surprisingly, given the short length of the hair, this breed probably sheds more than you would expect, so it is important to remove any loose fur that you can. The pug does not require a regular bath unless it is particularly dirty. Nail trimming should be done regularly to prevent discomfort and annoyance.

Because of its good nature, even temper, and playful and charming personality, the pug is a very easy dog to train, especially from an early age. It wants nothing more to please its owner with a show of obedience. Even though this is a small breed, it can be trained to perform any tricks and tasks that your imagination desires. However, the pug is a sensitive soul who may react poorly to harsh training methods. That is why you should encourage it with positive feedback and treats. Try not to raise your voice or become frustrated with it.

The pug is a good breed for people who don’t need an overly active dog. It is comfortable with spending a great deal of the day resting around the home. Nevertheless, in order to keep your dog healthy, pug owners should engage their pets with regular and moderate exercise in the form of walks and play time. Even though it is hardly the most athletic breed, the pug is able to excel at agility and sports competitions. Because of its tendency to gain weight, exercise will help prevent it from becoming heavy or obese. Whenever you go out in the summer, you should make sure your dog has plenty of protection from the sun and receives regular water breaks to prevent overheating.

Because of this breed’s many health issues, you should always obtain an early health screening from the vet immediately after purchasing your puppy. You might want to look out for any genetic or immune disorders that sometimes affect puppies from an early age. It is better to catch them early so you still have time to intervene. The silver, fawn, or black coat should also develop from a very early age.

It is no stretch to say that the pug may be one of the very best dog breeds for children. Considering its size, the dog is very tolerant of rough play. It is small but also sturdy, kind but also resolute. Compared to a larger or more active breed, it is also less likely to frighten small children. Your family may be delighted and charmed by the pug’s little antics.

Breeds Similar to the Pug

If you enjoy small short-snouted dogs, then you might want to check out the following breeds:

Popular Names for the Pug

According to Rover, these are the 10 most popular names for the pug:

The pug is one of the most famous dog breeds around the world. You may be already familiar with the following fictional or celebrity pugs:

If you don’t mind getting a smaller toy dog, then the pug is possibly one of the best family dogs you can purchase. It gets along very well with even the smallest children thanks to its size and pleasing temperament. Pugs and children both tend to enjoy the company of the other.

How much do pugs cost?

The cost to adopt a pug is usually between $350 and $550, which should include the dog’s registrations and vaccinations. The cost of a new pug, depending on where you buy it from, can range up to $1,500. This price should suit most owners but probably won’t ensure a high breeding pedigree. If you really want a pug with a great lineage, then it may cost you between $2,000 and $6,000.

The pug is a fairly friendly breed that will almost never lash out in anger or aggression unless really provoked. This does not necessarily mean it has a docile personality either since it loves to play around and have fun.

How big do pugs get?

Pugs tend to grow no bigger than 13 inches in height and 18 pounds in weight. It is light enough to pick up and carry around with you like many toy dogs.

How long do pugs live?

Even with some of the health problems, pugs have a good life expectancy of 13 to 15 years. If it remains free of serious disorders throughout its life, then the pug may end up living a few years longer.

Are Pugs herbivores, carnivores, or omnivores?

Pugs are Omnivores, meaning they eat both plants and other animals.

What Kingdom do Pugs belong to?

Pugs belong to the Kingdom Animalia.

What class do Pugs belong to?

Pugs belong to the class Mammalia.

What phylum to Pugs belong to?

Pugs belong to the phylum Chordata.

What family do Pugs belong to?

Pugs belong to the family Canidae.

What order do Pugs belong to?

Pugs belong to the order Carnivora.

What genus do Pugs belong to?

Pugs belong to the genus Canis.

What type of covering do Pugs have?

Pugs are covered in Hair.

What is an interesting fact about Pugs?

Pugs are fun and sociable, yet stubborn!

What is the scientific name for the Pug?

The scientific name for the Pug is Canis lupus.