Click through all of our Quail images in the gallery. 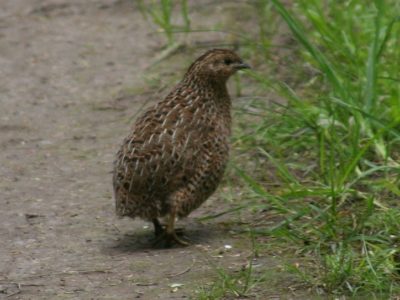 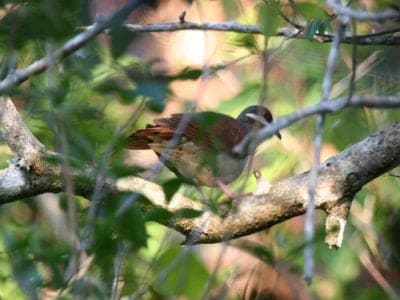 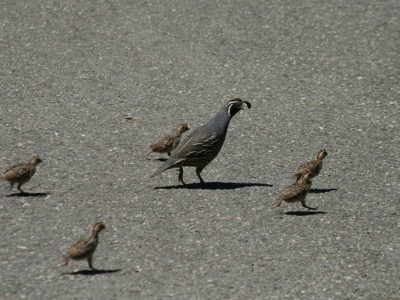 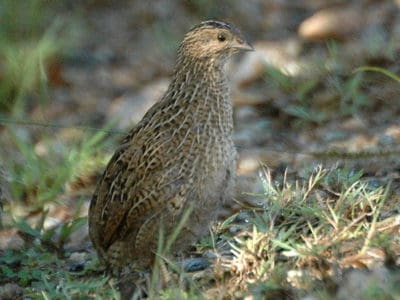 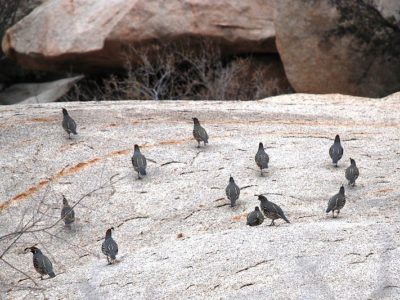 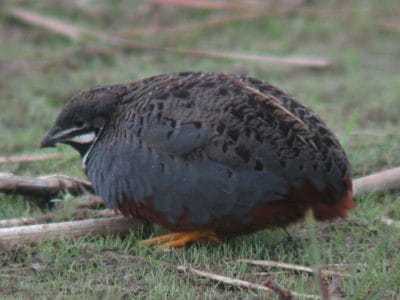 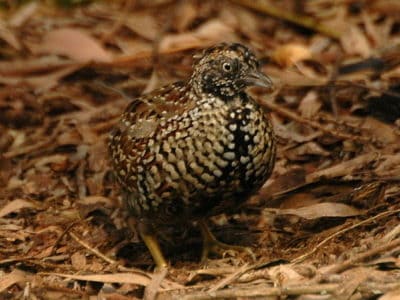 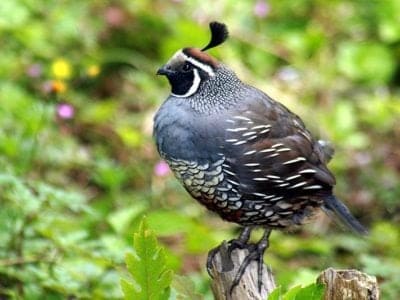 View all of the Quail images!

Known for their plumes and distinctive calls.

Quail are plump, short-necked game birds whose natural habitat includes large areas of North America, Europe, Asia, and northern Africa. They also inhabit South America and Australia to a lesser extent. Some species have been domesticated and raised on farms for their meat and eggs, while populations in certain locations often hunt wild quail. Quail birds spend most of their time on the ground as their squat bodies often make it difficult for them to stay in flight for long distances. Birders can readily identify any species by the plumes on their heads, which are a collection of small feathers.

These are small birds that are generally bigger than robins but smaller than crows, although you’ll find a great difference among the species. Some are as small as four inches tall and can range up to 11 or 12 inches in height. They have small heads and short, broad wings along with a long and square tail. Both males and females have a topknot of feathers that project forward, with males having a longer and bigger plume, which are dark and comprised of several feathers. The coloration and arrangement of feathers on the underbelly result in a scaly appearance. Some species also have speckling on the upper breast. Many quail have bills typical of seedeaters, meaning they are serrated, short, stout, and slightly decurved.

Japanese quail males have a clock gland on the throat, which secretes a white foamy liquid that is often used to assess reproductive fitness.

These birds can be notoriously difficult to see as they like to hide in the underbrush. You’ll often hear their distinctive calls instead of seeing them. Males vocalize in the mornings, evening, and sometimes at night. For the most part, they are solitary birds, preferring to spend time alone or with just one other quail. The exception is during mating season when large flocks, known as convoys, gather in groups of about 100. The Bobwhite tends to live in coveys of 11 to 12 birds to help protect each other against predators. Some species of Old World quail migrate, but most New World species do not and live in the same general area where they were born.

They spend much of their time scratching the soil to dig up food and particularly like to forage beneath shrubs or on open ground near foliage. When startled, they will suddenly take flight quickly at speeds up to 40 mph. Other species prefer to remain motionless when threatened with danger. Some species have bony heel spurs to protect them against predators. Wherever these birds live, they require cover for roosting, resting, nesting, escaping from predators, and for protection from the weather.

Some wild species, such as Gambel’s quail, like to roost in dense shrubs or trees. They love shade from various types of vegetation as dense vegetation provides shelter from predators. Females build nest sites on the ground, lining them with twigs, grass stems, leaves and feathers, and preferring to hide them under shrubs, rocks, or other protected areas. Many quail like to take dust baths to eliminate pests from their feathers and keep themselves clean.

In captivity, Japanese quail, which are the most popular species raised for their meat and eggs, are territorial, often defending their homes against intruders. They will sometimes resort to pecking or cannibalism if they have overcrowded conditions.

You’ll find California Quail in chaparral, sagebrush, woodlands predominated by oak trees, and foothill forests of California and the Northwest. Other favorite habitats include semi-arid and brush scrubland in the southwestern United States and Mexico. They’re tolerant of people and can be common in city parks, gardens, and agricultural areas.

These birds are omnivorous animals, but they tend to have a primarily vegetarian diet. Chicks love to eat insects, but their diet gradually shifts to plant material as they mature. Their diet consists of seeds, leaves, wheat, barley, flowers, and fruit, along with occasional grasshoppers and worms. Some species, such as Gambel’s quail, are readily able to adapt their diet to the time of year as well as their hydration needs. When available, these quail will eat cacti fruits and berries.

Because Quail are small, they have many different animal predators. Many small mammals like to eat them, including raccoons, foxes, squirrels, coyotes, bobcats, skunks, dogs, and cats. Hawks, owls, rats, and weasels will also hunt for quail eggs.

Humans are also considered predators, but the overwhelming number of quail and quail eggs consumed by people come from commercial farms. However, wild quail are often pursued by hunters in the southeastern United States.

In captivity, quail are easy to grow. Even though common poultry diseases affect them, they are somewhat resistant. The most popularly domesticated breed, Japanese quail, mature about six weeks after hatching. With proper care, they can begin reproducing when they are 50 to 60 days old. Hens are able to lay an average of 200 eggs during their first year. These birds have a lifespan of two-and-a-half years in captivity. Grouping a single male with three females produces high fertility. Eggs take an average of 23 days to hatch. Newly hatched quail chicks are small and have to be protected from drowning in water troughs by filling those areas with pebbles or marbles to prevent them from getting into the water. When the chicks reach one week old, the pebbles can be removed.

Some species, such as Gambel’s quail, are monogamous, but others, like the California quail, form broods that contain multiple males and females. During mating season in the spring, males claim their territories and compete for females, who build nests to lay 12 to 16 eggs after fertilization. Both males and females care for the chicks.

Chicks of most species are precocial, meaning that they are well developed at birth and able to leave the nest and follow their parents. After two weeks, they can fly and are reasonably independent at three to four weeks. The average lifespan for wild quail is two to three years, but many can live as long as five or six years.

Some species, such as the Northern Bobwhite, only have a 20 percent survival rate beyond the first year. In addition, only 32 to 44 percent of nests hatch successfully. Because of this low survival rate, Northern Bobwhite will often attempt to raise two to three broods each season. For this species, hatching starts in late April and continues to early July.

In general, about 70 to 80 percent of the wild quail population dies each year. High levels of breeding offset the mortality rate.

Approximately 130 species of quail exist throughout the world, so their conservation status is considered of least concern by the International Union for the Conservation of Nature. Of those species, about 70 are domesticated.

However, in the 1990s, the California quail was deemed an endangered species as their numbers had dropped to below 100. Their numbers have rebounded, and they are no longer considered in danger of extinction.

Habitat destruction and uncontrolled hunting negatively affect a handful of wild quails. The most notable is the Southern Bobwhite, which has suffered due to urban sprawl and destruction of its favorite habitats.

Even though Gambel’s quail is a popular game bird, the numbers of this species are extensive, so there are no significant conservation or significant hunting restrictions.

How long do quails live?

The average life expectancy of wild quails is one-and-a-half years. Captive quails can live two to three years, although there is variation among species.

What do quails eat - are they Carnivores, Herbivores, or Omnivores?

While quail are technically omnivores, they tend to have a primarily vegetarian diet consisting of seeds, plants, certain grains, and fruit, as well as grasshoppers or worms on occassion

What is the plume on the quail's head for?

The plume on top of the quail’s head helps a male bird attract a mate. Females generally prefer males with a full plume as opposed to those who are balding.

Why do quails run instead of fly?

Quails are gallinaceous birds, meaning that they are plump ground-feeders who aren’t good at flying. They only take to flight when they are startled or when migrating.

How far can a quail fly?

Most quail cannot fly far as they rapidly beat their wings when aloft and don’t have the necessary endurance. They usually live within a 40-acre radius of where they were born.

What do quail sleep in?

Most quail species scratch out hidden hollows in the ground under tall grass or brushes, against a tree or near rock formations.

What Kingdom do Quails belong to?

Quails belong to the Kingdom Animalia.

What phylum do Quails belong to?

Quails belong to the phylum Chordata.

What class do Quails belong to?

Quails belong to the class Aves.

What family do Quails belong to?

Quails belong to the family Phasianidae.

What order do Quails belong to?

Quails belong to the order Galliformes.

What genus do Quails belong to?

Quails belong to the genus Coturnix.

What type of covering do Quails have?

Quails are covered in Feathers.

In what type of habitat do Quails live?

What are some distinguishing features of Quails?

What are some predators of Quails?

Predators of Quails include cats, snakes, and raccoons.

What is the average clutch size of a Quail?

What is an interesting fact about Quails?

What is the scientific name for the Quail?

The scientific name for the Quail is Coturnix Coturnix.

What is the Quail's wingspan?