Click through all of our Quoll images in the gallery. 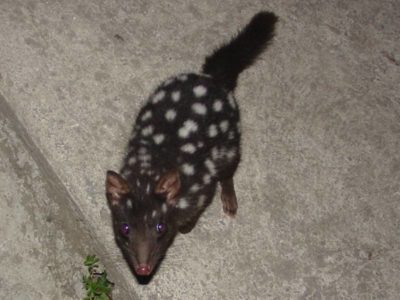 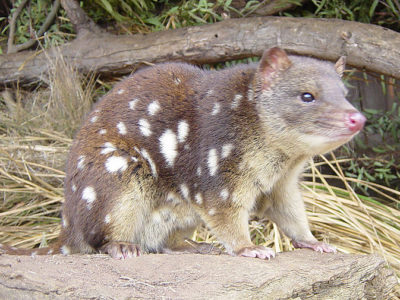 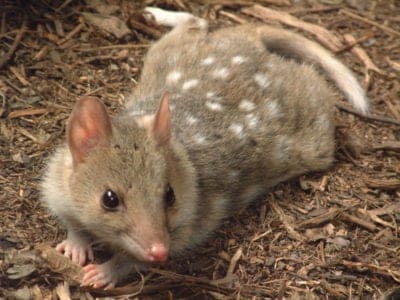 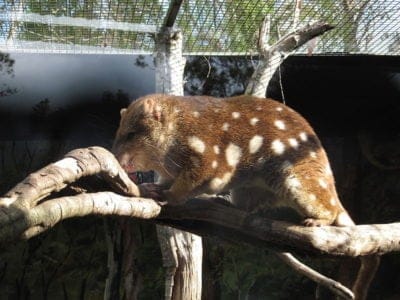 View all of the Quoll images!

The quoll may look small and timid, but its modest size masks a fearsome disposition.

The quoll is one of the many unique marsupials found nowhere else except for Australia and New Guinea. Like many other marsupials, including the kangaroo, the evolution of the quoll was shaped by the region’s geographical isolation and diversity. But for the past few centuries, the quoll is an animal that has been under siege in its native habitat. Fragile and at risk, these unique creatures may need the help of conservationists to survive.

Dasyurus is the scientific name for the entire genus of quoll. Translated from Latin, the name means ‘hairy tail,’ reflecting the animal’s most prominent feature. The quoll is closely related to the Tasmanian devil, the dunnart, and several other small marsupials.

Based on genetic analysis, scientists concluded that the first quolls evolved around 15 million years ago, and the six living species can all trace their origins back to a common ancestor around four million years ago. A few extinct species have been identified from the fossil record.

The quoll is a carnivorous marsupial. It can be distinguished by the long snout, pink nose, hairy tail, big ears, sharp teeth, long body, and a brown or black coat color with white spots. The defining feature of a marsupial is the large abdominal pouch with which it carries and protects the undeveloped offspring. However, only the tiger quoll has a true pouch. The other five species have folds in the skin that face toward the tail. These folds develop during the breeding season.

The quoll is an animal that exhibits a wide range of different sizes. The smallest species, the northern quoll, is about the size of a kitten, while the eastern quoll and western quoll are around the size of an adult cat. The impressive tiger quoll (aka spotted quoll) dwarfs all of the others. Stretching 30 inches from head to toe (plus another 15 to 20 inches with the tail fully extended), it is one of the largest carnivorous marsupial species in all of Australia. Male quolls tend to be larger than the females on average, but there is otherwise little sexual dimorphism, meaning that it is difficult to distinguish the sexes from each other based on their appearance alone.

Quolls are solitary and reclusive creatures that tend to hunt, forage, and live on their own. Interactions outside of mating season are limited, but they do occur in certain areas. For example, quolls seem to have the equivalent of communal toilets. Located around rocky outcroppings, these wide-open spaces may serve as a gathering place. Females also seem to share dens with other members of their species, male or female. However, males will rarely share dens with each other.

Quolls will make almost anything into a home: rock crevices, hollowed-out trees or logs, underground burrows, and even termite mounds. They spend most of their days resting inside of the den but may sometimes come out to bask in the sunshine. Each quoll has a small core range plus a larger home range that may extend more than a mile in every direction. They will defend their territory against outside intruders, and despite their size, they can be quite aggressive. Males tend to have a bigger range than females.

The quoll inhabits forests, woodlands, and grasslands across the Australian region. Their habitats typically receive moderate to heavy amounts of rainfall. Each species has adapted to a slightly different area.

The quoll is an opportunistic scavenger that will consume almost anything it can find, living or dead. Their most common meals include insects, birds, mice, rats, lizards, and frogs. The largest quoll species are also known to consume medium-sized birds and mammals such as echidnas, rabbits, and possums. Although primarily a carnivore, the quoll can also consume fruits and occasional vegetable matter.

They spend most of their time foraging on the ground, but quolls can also be quite skilled at climbing. They have been known to ascend trees looking for birds to hunt. They will typically travel a few miles per night in search of food.

The quoll faces a multitude of dangerous threats in the wild. When introduced into Australia, non-native animals such as foxes and cats have had a destabilizing effect on quoll populations. They not only prey directly on the quoll, but compete with the quoll for food and resources. Other sources of potential danger include pythons, dingos, eagles, and owls.

Adult quolls can bite and scratch to defend themselves, and if all else fails, they can run away and hide. The young pups are the most vulnerable to predation, as they are almost completely reliant on their mothers for protection.

The introduction of the poisonous cane toad to Australia in 1935 also had a devastating impact on the local quoll population. Originally brought to Australia from the Americas, the cane toad was considered to be effective at controlling pests, but it had the unintended effect of poisoning and killing predators instead. The toad still persists across much of northeastern Australia, threatening the quoll populations that remain. Quolls appear to have no natural resistance or immunity to the poison. Its only guaranteed defense is to avoid the toad entirely.

Quolls face yet another threat from human encroachment. When wandering into human territory, they may fall victim to dog attacks, poisonous baits, car accidents, and deliberate human persecution. Although quolls are known to prey on insects and pests that destroy crops, they have also caused damage by raiding poultry farms, which leads to retaliation from farmers. Habitat loss from logging, farming, and urbanization has constricted the natural range of the quoll as well.

In the future, quolls could be particularly vulnerable to alterations in the planet’s climate. As bushfires rage across the country with greater intensity, climate change could destroy large segments of the quoll’s natural habitat.

The quoll breeding season begins in Australia’s autumn or winter seasons from April to July. Quoll copulation can be long and dangerous affairs full of biting and gnawing. The tiger quoll, for example, can take around eight hours to fully mate, much of it damaging to the female. The animals may have multiple partners during the mating season.

Some species can produce up to 30 offspring at a time, but only six to eight pups tend to survive, because that’s the maximum number the mother can nurse at once. The remaining pups are destined to perish.

The quolls have a gestation period of approximately three weeks. Small and undeveloped, the young pups spend the first few months of their lives hidden away in their mother’s pouch, feeding on milk from the teats. As they grow, the young pups will attach to the mother’s stomach and later the back. It takes around five months to achieve full independence and around a year to become sexually mature.

The typical lifespan is two to five years, depending on the size of the species. Few individuals live beyond their first or second mating season. The maximum lifespan ever documented in captivity was approximately seven years.

Quolls once covered most of mainland Australia, but the arrival of European settlers in the late 18th century began a period of decline for the animals. Now they are constricted to the fringes of Australia. Because quolls are skilled at hiding, conservationists can have a hard time counting and tracking them. However, from what we know, the quolls are in a precarious state. Both the eastern quoll and the northern quoll are endangered. The remaining species are either vulnerable or near threatened. According to the International Union for the Conservation of Nature (IUCN)’s Red List, each species has about 10,000 to 15,000 individuals remaining.

Conservationists have successfully bred the quoll in captivity in order to save the species from destruction and provide backup populations. As long as this protected population remains, conservationists can prepare the quoll for reintroduction into its previous habitats. If something goes wrong, then they can adapt their strategy to compensate.

The eastern quoll is an interesting case study. It largely disappeared from mainland Australia in the 1960s, outside of a few sightings. The species is now protected in Tasmania, where it faces fewer threats. In 2016, conservationists began to reintroduce the species back into mainland Australia for the first time in around 50 years. The quolls showed promising signs of revival when they began to produce their first batch of offspring.

The removal of foxes and toads (as well as better awareness and stewardship by humans) has allowed the quoll to return to parts of its former range, but the challenge for animals raised in captivity or relative safety is that they may have trouble immediately identifying threats when introduced into more hostile areas. The animals have a greater chance of survival if they have learned to be wary of threats beforehand.

Are quolls Herbivores, Carnivores, or Omnivores?

Although quolls are omnivores, they have a primarily carnivorous diet. Smaller quolls tend to eat insects, reptiles, birds, and even small mammals. Larger quolls, like the spotted quoll (aka tiger quoll), are even known to eat possums and rabbits.

Are quolls related to Tasmanian devils?

Yes, quolls are related to Tasmanian devils because both are part of the Dasyuridae family – making these carnivorous marsupials cousins!

Quolls will typically run to avoid contact with people. Due to their wild nature and sharp teeth, however, it is best to avoid getting too close to them if you encounter one in the wild.

What Kingdom do Quolls belong to?

Quolls belong to the Kingdom Animalia.

What phylum do Quolls belong to?

Quolls belong to the phylum Chordata.

What class do Quolls belong to?

Quolls belong to the class Mammalia.

What family do Quolls belong to?

Quolls belong to the family Dasyuridae.

What order do Quolls belong to?

Quolls belong to the order Dasyuromorphia.

What genus do Quolls belong to?

Quolls belong to the genus Dasyurus.

What type of covering do Quolls have?

Quolls are covered in Fur.

In what type of habitat do Quolls live?

Quolls live in woodlands and grasslands.

What is the main prey for Quolls?

What are some predators of Quolls?

Predators of Quolls include humans, snakes, and crocodiles.

What is the average litter size for a Quoll?

The average litter size for a Quoll is 4.

What is an interesting fact about Quolls?

Quolls are found across Australia and Papua New Guinea!

What is the scientific name for the Quoll?

The scientific name for the Quoll is Dasyurus Viverrinus.

What is the lifespan of a Quoll?

How fast is a Quoll?

A Quoll can travel at speeds of up to 15 miles per hour.