The robin can migrate up to 3,000 miles to its wintering grounds

Click through all of our Robin images in the gallery. 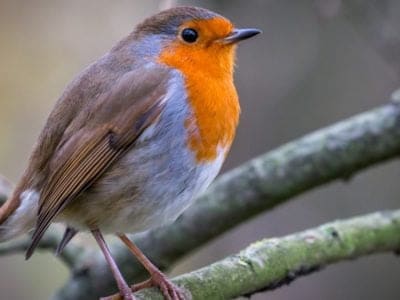 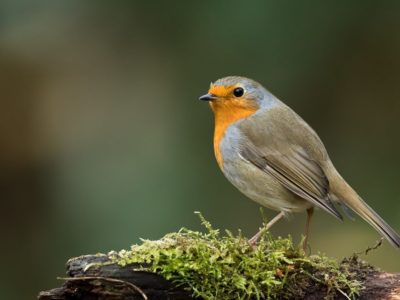 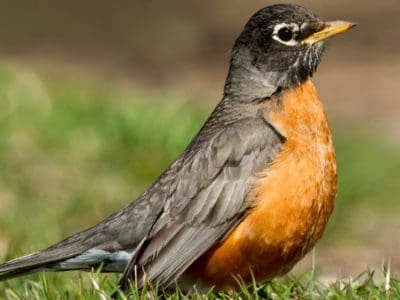 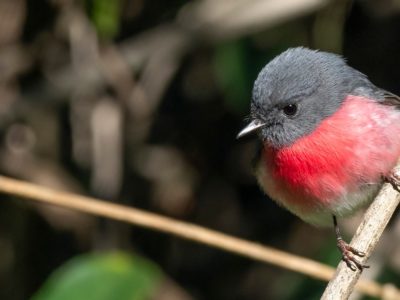 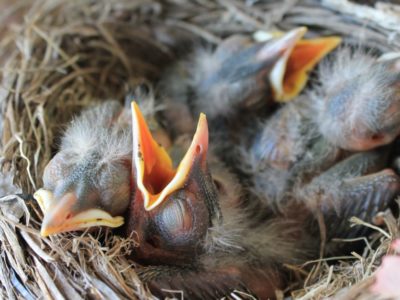 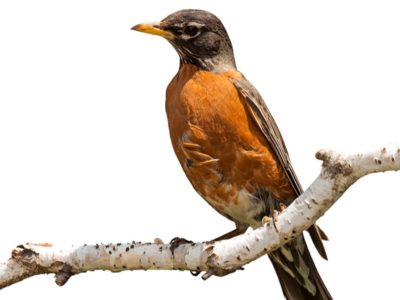 View all of the Robin images!

The robin is one of the most common songbirds and a staple of the American ecosystem.

Its rich and beautiful songs are often a harbinger of the arrival of spring. There are several different species of the robin. The two most common are the American robin and the European robin. Unless otherwise indicated, this article will tend to discuss the American robin first.

Where to Find the Robin

The American robin is a bird which is endemic to the entire North American continent. The European robin, by contrast, has a massive range across all of Europe and parts of Asia and North Africa. It inhabits almost any ecosystem, like woodlands, fields, and gardens, with short grass for foraging and some scattered trees for nesting.

These birds construct a cup-shaped nest out of coarse grass and twigs all woven together. Mud, moss, feathers, and finer grass line the interior to provide a soft cushion. The nest is usually located 5 to 15 feet above the ground in dense shrubs or trees. They have adapted very well to human habitats and sometimes construct a nest in garages, houses, and other buildings.

The scientific name of the American robin is Turdus migratorius. Turdus is the Latin name for the thrush (to which it’s closely related), while migratorious is obviously the Latin name for migration. A member of the thrush family Turdidae (along with bluebirds and solitaries), the American robin is only distantly related to the European robin, which belongs to the family of Old Word flycatchers known as Muscicapidae. The scientific name of the European robin is Erithacus rubecula. Erithacus is the Ancient Greek term for the robin. Rubecula appears to be a Latin name derived from ruber for red.

Although the American and European robins are only distantly related, the original American colonists named the American robin after its European counterpart due to the somewhat similar appearance, particularly the bright red or orange markings on the breast. The main difference is that the American species have darker feathers around the back and an upright posture, while the European robin has light brown, gray, or white feathers and a more rounded body. The American robin is also the larger of the two. It measures up to 11 inches long with a wingspan of up to 16 inches. The European robin is about 5 inches long with an 8 to 9-inch wingspan.

The American robin is a social species that gather in large flocks at night and on their winter grounds. The flocks break up during the day to search for food. The bird is generally friendly toward other members of its species. The only time it becomes more territorial is in the breeding season. As a songbird, they can often be heard chirping from a high perch to attract mates, warn of the presence of predators, and in general to communicate with each other. Their song behavior appears to be changing in response to human society, however. The chirping now begins earlier in the day and operates at a higher pitch than in the past.

The American species completes a yearly migration in which it travels as far south as Mexico and Central America for the winter and then returns to the north for the spring. Those birds residing in Alaska and northern Canada for the breeding season have the farthest to travel in the winter, sometimes as far as 3,000 miles per trip, while those in the central and southern United States don’t travel too far from their breeding grounds. The European bird, meanwhile, migrates to Southern Europe, North Africa, and even parts of Asia for the winter. The Scandinavian and Russian species migrate to the more temperate areas of Britain.

These birds play an important role in the ecosystem by keeping pests in check and dispersing undigested seeds throughout the environment.

What does the robin eat?

The bird’s diet consists of approximately 40% invertebrates (like grasshoppers, caterpillars, earthworms, and beetles) and 60% fruits and berries. It tends to eat animals in the spring and summer and fruit more toward the autumn and winter.

These birds fall victim in large numbers to predation and habitat loss. But according to the IUCN Red List, both the American and European robins are least concern, which means they require no special conservation efforts.

What eats the robin?

Adult birds are most often preyed upon by domesticated cats, large snakes, and hawks. Eggs are also consumed by squirrels, snakes, blue jays, crows, ravens, and grackles. Whenever they’re out foraging, the bird always keeps an eye on nearby members of the flock for the presence of predators. If they cannot get away easily, then they may mob small predators to chase them off.

The bird’s breeding season begins shortly after returning from the winter grounds in the spring and lasts until around July. These birds acquire a new mate every year and never form permanent or long-term bonds. This means the male must engage in an annual courtship process that involves a strutting display, singing, shaking, throat puffing, and fluffing their tail feathers.

After finding and copulating with an appropriate mate, the female produces three to five light blue eggs per clutch and up to three clutches per season. The chicks emerge from the eggs after about two weeks of incubation. They are undeveloped and almost completely reliant on the parents. After about two weeks of life, the young chicks develop their flight feathers relatively quickly, though at this early stage they differ from their adult counterparts with spots on the breast and a paler color.

The chicks leave the nest right after the growth of their flight feathers. This quick development time is perhaps due to the upcoming autumn migratory route and due to the need to make way for a new clutch. Most American robins only live about two years on average, and a quarter of them won’t even survive the first summer of their lives. If they do develop into adults, however, the survival prospects improve significantly. The oldest recorded robin lived about 14 years in the wild.

It is estimated that the American species’ population stands at about 310 million. The IUCN Red List also estimates up to 200 million mature European robins in the wild. In the 20th century, they were badly affected by the pesticide DDT, but numbers quickly recovered after the DDT ban in 1972. Both species appear to be on the rise today.

Are Robins herbivores, carnivores, or omnivores?

Robins are Omnivores, meaning they eat both plants and other animals.

What Kingdom do Robins belong to?

Robins belong to the Kingdom Animalia.

What class do Robins belong to?

Robins belong to the class Aves.

What phylum to Robins belong to?

Robins belong to the phylum Chordata.

What family do Robins belong to?

Robins belong to the family Muscicapidae.

What order do Robins belong to?

Robins belong to the order Passeriformes.

What type of covering do Robins have?

Robins are covered in Feathers.

What genus do Robins belong to?

Robins belong to the genus Erithacus.

In what type of habitat do Robins live?

What is the main prey for Robins?

What are some predators of Robins?

Predators of Robins include cats, dogs, raccoons, and foxes.

What are some distinguishing features of Robins?

Robins have small bodies, and males have bright red chests.

How many eggs do Robins lay?

The robin’s main predators are snakes, hawks, and cats.

Robins can be a little aggressive in the breeding season, and they’re certainly wary of humans. But in general, they are quite docile birds.

Females are slightly smaller and have a paler color than males, but otherwise, the two sexes are similar.

What does seeing a robin symbolize?

The American robin is often a symbol of renewal and spring. It has been featured in numerous poems, books, songs, and films.

Is the robin migratory?

How many eggs does the robin lay?

The robin lays three to five eggs per clutch.

How fast does the robin fly?

The American robin can fly at speeds of 20 to 36 miles per hour. This speed is necessary to make the epic journey to the wintering grounds.

What is the robin’s wingspan?

When do robin chicks leave the nest?

The robin leaves the nest at a relatively swift two weeks, but they may stick around and still beg for food.

What is an interesting fact about Robins?

There are more than 45 species of Robin in Australia alone!

What is the lifespan of a Robin?

How do Robins have babies?