Actually related to Elephants and Manatees!

Click through all of our Rock Hyrax images in the gallery. 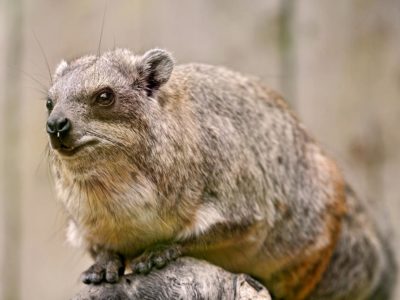 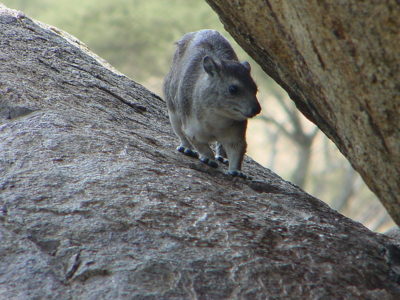 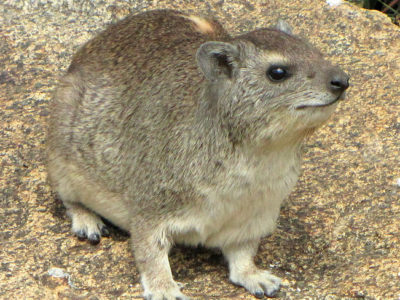 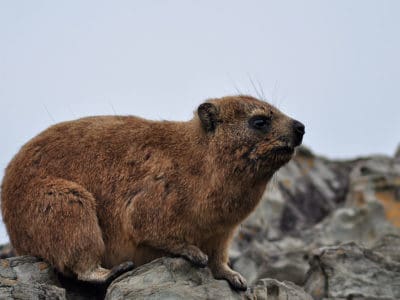 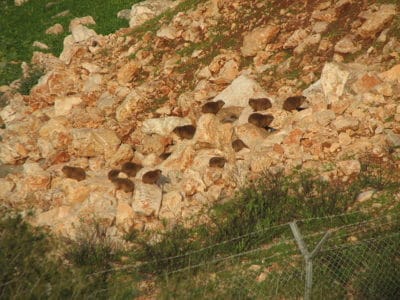 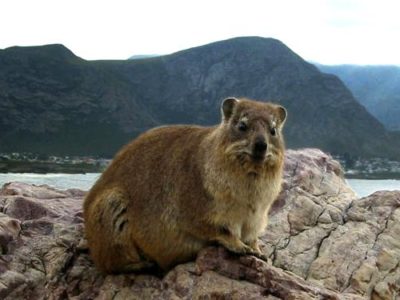 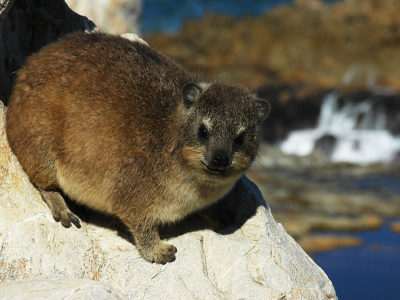 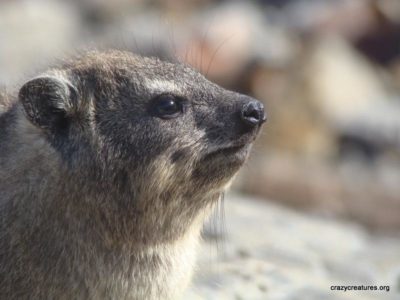 View all of the Rock Hyrax images!

The Rock Hyrax is a large species of Hyrax, most commonly found in Eastern Africa. They are also known as the Rock Dassie or the Rock Rabbit, due to their rodent-like appearance but despite this, they are thought to be most closely related to much larger animals including the Elephant and the Manatee. Although obviously much smaller than their distant ancestors, it is the teeth and bone structure of these animals that relates them to one another. The Rock Hyrax though, is such a unique mammal that it is classified in an order of its own, along with its subspecies known as the Yellow-Spotted Hyrax, and the two Tree Hyrax species, which although are very similar in appearance, spend most of their time in the trees rather than on the ground.

The Rock Hyrax looks very much like a large Guinea Pig, but with rounder ears and the lack of a tail. They have thick, soft fur which is usually brown or grey in colour, but can be slightly yellow. A small hairless gland on their back is covered with longer hair than the rest of the Rock Hyrax’s body, which is black but yellow or white on the Yellow-Spotted Hyrax (hence its name). Rock Hyraxes have short legs with four toes on their front feet, and three on each of the back. The pads on the bottom of their feet, have a rubbery texture to them, allowing them to clamber about amongst the rocks more easily. The Rock Hyrax has a more rounded head than other Hyrax species, which have more pointed, rodent-like noses.

The Rock Hyrax is most widely distributed across the east of Africa but they also found throughout the south in Botswana, Namibia, South Africa, Zambia and Zimbabwe. The Rock Hyrax is usually found in rocky outcrops where there is a good variety of vegetation including both shrubs and trees. They are very adaptable animals having been found living at altitudes ranging from sea level to 14,000 feet above it. Their habitats range from dry savanna to dense rainforest, but these areas must contain natural crevices between the rocks and boulders where the Rock Hyrax is able to shelter as they do not dig burrows of their own.

The Rock Hyrax is a very sociable animal, living together in colonies of up to 50 individuals. Rock Hyrax colonies are headed by a territorial male and consist of females and their young, with the male keeping watch for predators and protecting the group’s patch from other males looking to move in on their shelter. Rock Hyraxes make a variety of noises including whistles and shrieks to communicate both within the group, and with other colonies in the area, with the male sounding the specific alarm call if a predator is spotted nearby. They spend the majority of their lives sunbathing on the rocks to warm up, before going off on short foraging trips, rarely far from the entrance to their home.

The male Rock Hyrax has the privilege of breeding with the females in his colony, which after a gestation period that can last for up to eight months, generally give birth to two or three young. The Rock Hyrax babies develop remarkably quickly, being able to run and jump just hours after birth and even start to nibble on vegetation after just a couple of days. They do however, still suckle from their mother, feeding on her milk until they are a few months old. The young Rock Hyraxes often gather together in small nursery groups, possibly as a form of protection whilst their mothers are out foraging for food. The Rock Hyrax reaches an average age of seven years old in the wild but some have been known to live for up to 12 years in captivity.

The Rock Hyrax is an omnivorous animal, feeding on nearly everything it can find close to the colony’s base. Rock Hyraxes feed on herbs, grasses, fruit and leaves, along with Bird’s eggs, Insects and small Lizards that are sleepily sunbathing on the nearby rocks. The Rock Hyrax is a very cautious feeder, stopping after every mouthful to quickly survey its surroundings and to keep an ear-out for the male’s alarm call. When feeding as a family group, the Rock Hyrax has been observed facing outwards so that a watchful eye may be kept on lookout whilst they are eating. They tend to eat quickly, with their foraging trips only lasting for short periods of time and they generally occur very close to their family base.

The small size of the Rock Hyrax makes it popular prey for numerous predators that inhabit similar environments. Large felines such as Leopards, Servals and Caracals are the primary predators of the Rock Hyrax along with Civets, large Birds and Snakes like Pythons. On having spotted the approaching danger, the male Rock Hyrax sounds the alarm call to tell the other members of his group that a predator is close. The Rock Hyrax then runs to hide in the safety of the gaps between the rocks, but will try to intimidate smaller predators by biting and snapping at them. Habitat loss mainly caused by deforestation, is one of the biggest threats to the Rock Hyrax, along with the hunting of them by Humans.

The Rock Hyrax lives in large colonies and although is not related to them, does exhibit some similar behaviours to the world’s larger rodents, as they are known to use latrines which are the sole areas that they use to go to the toilet, in order to keep the rest of their territory clean. The Rock Hyrax can go far long periods of time without drinking as they are thought to obtain most of the moisture that they need from their food. Fossil remains show that the Rock Hyrax could have once been much bigger in size, which may explain why they have such a long gestation period for an animal of their size.

Although it poses no threat to people living in the same area, the Rock Hyrax has been hunted in the past, mainly for its thick and soft fur but also for its meat. One of the biggest threats to the Rock Hyrax today though is the loss of their natural habitats throughout much of their historical range, with growing Human settlements and the clearing of land, generally for agriculture. However, the areas that the Rock Hyraxes use as toilets are actually common places to find Humans, who are said to collect the deposits left by these animals, to use in traditional medicines.

Today, the Rock Hyrax has been listed by the IUCN as an animal that is of Least Concern of becoming extinct in the wild in the immediate future. The Rock Hyrax is still fairly widespread with high populations numbers in certain areas. However, Rock Hyrax populations are under threat throughout much of eastern and southern Africa, mainly due to habitat loss.

Rock Hyraxes are Omnivores, meaning they eat both plants and other animals.

What Kingdom do Rock Hyraxes belong to?

What phylum to Rock Hyraxes belong to?

What family do Rock Hyraxes belong to?

What order do Rock Hyraxes belong to?

What type of covering do Rock Hyraxes have?

Rock Hyraxes are covered in Fur.

What genus do Rock Hyraxes belong to?

Where do Rock Hyraxes live?

In what type of habitat do Rock Hyraxes live?

What are some predators of Rock Hyraxes?

Predators of Rock Hyraxes include leopards, large birds, and snakes.

How many babies do Rock Hyraxes have?

The average number of babies a Rock Hyrax has is 2.

What is an interesting fact about Rock Hyraxes?

Rock Hyraxes are actually related to Elephants and Manatees!

What is the scientific name for the Rock Hyrax?

The scientific name for the Rock Hyrax is Procavia capensis.

What is the lifespan of a Rock Hyrax?

Rock Hyraxes can live for 5 to 12 years.

How many species of Rock Hyrax are there?

There are 2 species of Rock Hyrax.

What is the biggest threat to the Rock Hyrax?

The biggest threat to the Rock Hyrax is habitat loss.

What is another name for the Rock Hyrax?

The Rock Hyrax is also called the rock dassie or rock rabbit.

How fast is a Rock Hyrax?

A Rock Hyrax can travel at speeds of up to 18 miles per hour.