There are more than 700 different species!

Click through all of our Salamander images in the gallery. 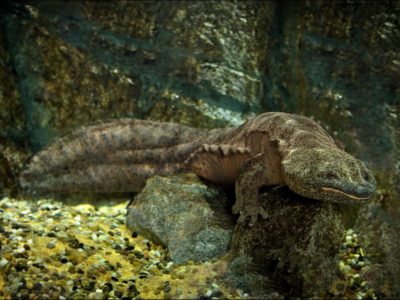 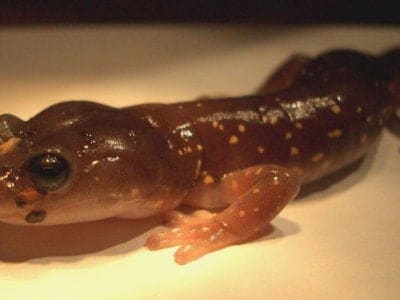 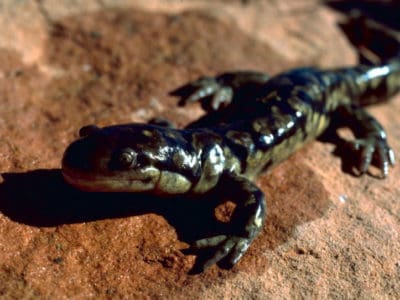 View all of the Salamander images!

• All salamanders must keep their skin wet and cool to survive

• Salamanders can’t hear sound, but they can feel vibrations in the ground to detect movements around them

• Some salamanders live under rocks while others live in trees

Salamander is the common name for this amphibian while Caudata is its scientific name. Salamanders belong to the Salamandroidea family and belong to the class of Amphibia. Salamanders have several other names including mud puppy, water dog, triton and spring lizard.

The word salamander comes from the Greek word Salamandra meaning fire lizard. This relates to an old belief that the yellow and black fire salamander has the power to live in fire.

Next time you see a salamander, take a moment to study it. These creatures look like a cross between a lizard and a frog. Its flat head looks kind of like a frog’s head while its long, smooth body, four short legs and tail look like a lizard’s. Though there are similarities between lizards and salamanders, a lizard is a reptile and a salamander is an amphibian.

A salamander’s color depends on its species. Many salamanders are solid brown or green. A fire salamander is black with yellow splotches while a tiger salamander has greenish-yellow skin with black stripes. A Chinese giant salamander has dark brownish-red skin with dark speckles.

The majority of salamanders measure about 2 to 6 inches long and weigh in the range of 3 to 8 ounces. As an example, a salamander that’s 6 inches long is equal in length to a pencil you might use in school. Furthermore, a salamander weighing 8 ounces is the same weight as a hamster in a pet shop.

The largest salamander on record was found in 1920 and measured 5.9 feet long. The smallest known salamander is called the Thorius and grows to be less than an inch long. This salamander is smaller than a matchstick!

While many brightly colored salamanders can release poison from glands on their neck or tail, other salamanders have skin color that blends in with their environment. Salamanders also have the ability to grow back their tail. So, if a predator captures a salamander it can drop its tail in order to escape! These are all excellent defensive features that protect salamanders from predators.

Salamanders are solitary creatures except when it’s mating season. These amphibians, especially the small ones, like to stay hidden. The only time a salamander may become aggressive is during breeding season while males are competing for mates.

Salamanders live all over the world, including Europe, Asia, North America and South America. But, the United States has the largest population of salamanders.

The giant salamander from China lives underwater in fast-moving rivers. Its brownish-gray, splotched coloring helps it to blend in with the rocks near the bottom of a river. Though this salamander lives underwater, it doesn’t have any gills like a fish. Instead, the oxygen it needs to breathe is absorbed through its skin.

There are even a few species of salamander such as the olm that live in caves and spend their lives in underground pools of water. The olm’s eyes have adapted allowing them to survive in such a dark environment.

Most salamanders live near water because that’s where they lay their eggs.

In early spring, many salamanders migrate from the trees down to the forest floor so they can make their way to the nearest body of water to breed.

What do salamanders eat? The answer to this question depends on what species of salamander you’re looking at. Though all salamanders are carnivores, some have larger items on the menu than others!

Small salamanders such as a fire salamander or a spotted salamander eat worms, spiders, snails and slugs. A larger salamander such as the tiger salamander may eat small fish or crayfish. A really big salamander like the Chinese giant salamander dines on frogs, fish, shrimp and crabs.

Salamanders are nocturnal so they hunt at night and may only eat a few times per week depending on their size. Generally, the larger the salamander, the more often it will need to eat.

As you may have guessed, the smaller species of salamander have more predators than the larger species. For instance, some of the predators that hunt the small spotted salamander include raccoons, skunks, snakes and turtles. Raccoons and skunks spend time looking for food near creeks and ponds where they dig under rocks. This is a common place to find salamanders.

Humans are predators to the Chinese salamanders. These large salamanders can end up in the nets of fisherman and sold for food or as pets.

Salamanders that live in the forests of the Amazon basin are at risk for losing their habitat when parts of the forest are cleared by humans. Also, water pollution that makes its way into lakes and creeks can affect the population of salamanders that live and breed there. Unfortunately, some salamanders try to cross busy roads to get to a nearby body of water and end up being killed by cars.

The conservation status of salamanders is Threatened. More efforts are needed to protect salamanders from losing their habitat and being taken from their environment and sold.

Male salamanders compete for the attention of females by releasing a scent. Once the male finds a suitable female, they mate resulting in fertilized eggs. The female lays the jelly-like, shell-less eggs in a body of water and the babies hatch in about 3 to 4 weeks. The average amount of eggs laid by a salamander is 300 though some species lay 450 or more.

The female salamander may stay and protect the eggs or leave after laying them. Once they hatch, the baby salamanders are on their own.

If you walk by a collection of baby salamanders near a creek you may mistake them for tadpoles or frog babies. Tadpoles and baby salamanders, also called salamander nymphs, look a lot alike. During the first three months of their lives, salamander nymphs breathe through gills, then slowly develop lungs. They survive by eating tiny insects floating by in the water. After about 3 months, the young salamanders make a home on land near the water.

Female salamanders lay hundreds of eggs in a creek, pond or other body of water. As you might expect, these tiny eggs are vulnerable to many predators including raccoons, skunks and fish. Just imagine a large fish or snake coming along and swallowing half or more of the eggs laid by a salamander! So, laying a large number of eggs helps increase the chances that at least some of the salamanders will survive into adulthood.

The lifespan of salamanders ranges from 5 to 20 years. A salamander with several predators is likely to have a shorter lifespan than a large salamander with a defensive feature such as the ability to release poison from its glands.

The two oldest salamanders on record lived in the Artis Zoo in Amsterdam. Both were Japanese salamanders that lived to be 52 years old.

An illness that can affect a salamander’s lifespan is a bacteria called Bsal. It is a fungus that spreads quickly among salamanders kept together.

Though there are many species and millions of salamanders in the world, their population is still regarded as Threatened. Loss of habitat, water pollution and poaching by humans all contribute to a decreasing population among the species.

Are salamanders carnivores, herbivores or omnivores?

Salamanders are carnivores no matter how big or small they are. After a collection of salamander eggs hatch, the salamander nymphs eat tiny invertebrate insects floating by in the water. As adults, salamanders eat everything from snails and worms to crayfish, shrimp and frogs.

Where do salamanders live?

Salamanders live in North America, South America, Europe, Asia and Central America. Some of them live in trees while others live under rocks. Salamanders must keep their skin moist and cool, so they normally live near a creek, pond, river or other body of water.

They can be. Some salamanders can release poison through glands on their body that may be harmful to humans. A person may pick up a salamander, get a little poison on their fingers, then rub their eyes. This would likely cause eye and skin irritation. Eating salamanders is risky because parts of them are poisonous. However, there are countries where it’s common for people to cook salamanders and eat them. As far as their behavior goes salamanders like to stay in hiding and aren’t aggressive creatures.

Can you keep a salamander as a pet?

Yes, you can keep a salamander as a pet. But, a salamander requires special care unlike other types of pets. For one thing, they need to be kept in an environment ranging from 55 to 65 degrees. Plus, their skin needs to be cool and moist at all times, so they remain healthy. Sometimes salamanders sold in pet shops can carry bacteria and other illnesses. This means you may be buying a salamander that is in poor health to begin with due to the way it’s been kept and handled. Furthermore, these amphibians need a certain type of food to stay nourished. You shouldn’t handle a salamander too often because human touch can be hard on its delicate skin.In the end, it may be better to learn all you can about these amazing amphibians and admire them from their proper home in the wild.

What Kingdom do Salamanders belong to?

Salamanders belong to the Kingdom Animalia.

What phylum do Salamanders belong to?

Salamanders belong to the phylum Chordata.

What class do Salamanders belong to?

Salamanders belong to the class Amphibia.

What family do Salamanders belong to?

Salamanders belong to the family Salamandroidea.

What order do Salamanders belong to?

Salamanders belong to the order Caudata.

What type of covering do Salamanders have?

Salamanders are covered in Permeable Scales.

What is the main prey for Salamanders?

What are some predators of Salamanders?

Predators of Salamanders include fish, snakes, and birds.

What is the average litter size for a Salamander?

The average litter size for a Salamander is 300.

What is an interesting fact about Salamanders?

There are more than 700 different Salamander species!

What is the scientific name for the Salamander?

The scientific name for the Salamander is Caudata.

What is the lifespan of a Salamander?

Salamanders can live for 5 to 20 years.

How do Salamanders have babies?