Can leap more than 1 meter into the air!

Click through all of our Serval images in the gallery. 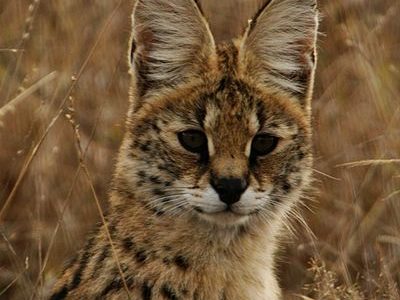 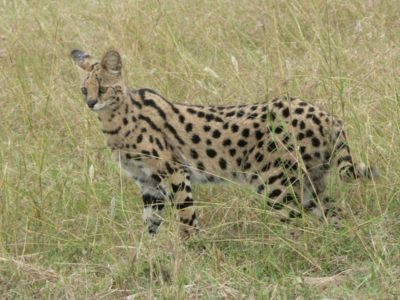 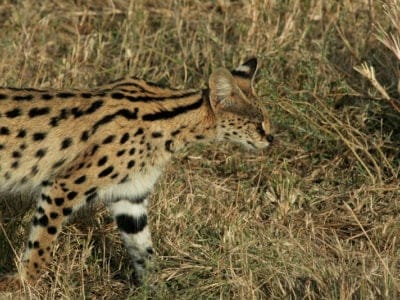 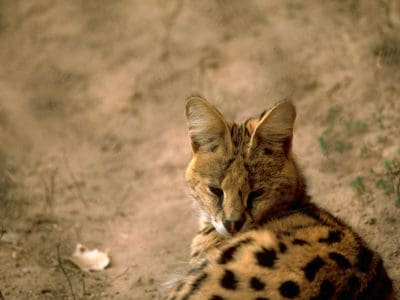 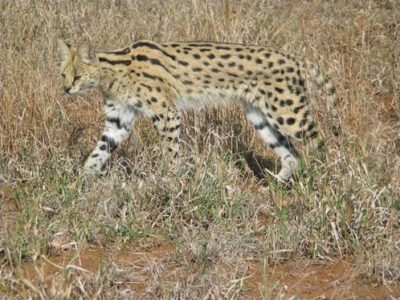 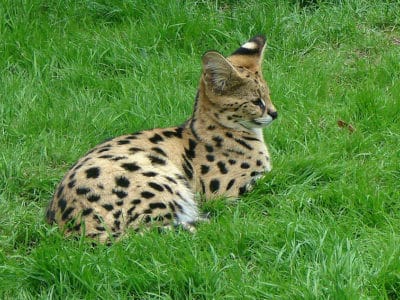 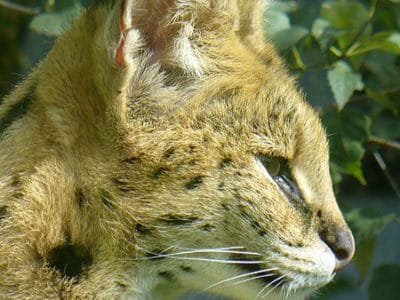 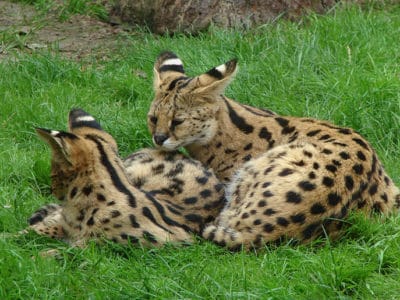 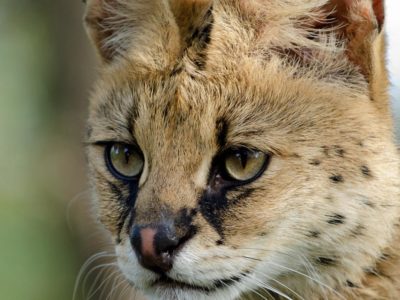 View all of the Serval images!

The Serval is a medium-sized species of cat that is found throughout sub-Saharan Africa, mainly in covered areas that are close to water. Thought to be most closely related to the African Golden Cat and the Caracal, the Serval is one of the most distinctive felines on the African continent with its spotted fur and long limbs giving it the appearance of a small Cheetah. Servals are animals with excellent smell, sight and hearing which helps them to detect prey both in the long grass and even underground, with their large and rounded ears being able to rotate independently to pinpoint small animals close-by. Although the Serval is not considered to be at any great risk in the wild, they are being subjected to increasing levels of the loss of their wetland habitats which has led to population declines in certain areas along with having been extensively hunted for their fur.

The Serval is an animal with yellowish or orange coloured fur that is covered with both dark spots and stripes (the size and placement of which vary wildly between individuals), that helps to camouflage the Serval into the long grass. Markings start on the top of the head, running between the ears and down the neck and forming four distinct stripes which break into spots on reaching the shoulders. The Serval’s relatively short tail is banded with black rings and ends in a black tip. Servals have quite long necks in comparison to their body size and when coupled with their long legs, enables their head to be up to 75cm off the ground which helps the animal to both see and hear clearly whilst hiding in long grass. Like all other felines (with the exception of the Cheetah) the Serval is able to pull-back its claws into protective pouches of skin in their feet which means that they are able to keep their claws sharp to hunt with as they are not being blunted when moving around.

Historically, the Serval would have once been found throughout Africa but is today mainly confined to areas south of the Sahara. Although there are a few small populations in the north, they are thought to number around 250 mature individuals and are considered to be locally critically endangered. The Serval has a relatively wide range throughout central and southern parts of Africa where it is most commonly found in reed beds and rushes that fringe wetlands and in grasslands that have a good source of water. Although wetlands are preferred, Servals are fairly adaptable animals and can be found in a range of other habitats within their home range too including forest, bamboo thickets, marshes and along streams providing that there is a good supply of food and plenty of water.

The Serval is a solitary animal that leads a crepuscular lifestyle, meaning that it is most active in the early morning and evening. Servals are highly territorial animals that roam throughout a home-range of between 12 and 20 square kilometres that is marked with scent such as urine or scratch marks on trees and on the ground. Like numerous other feline species around the world, the range of a male Serval overlaps those of as many females as possible with which he can mate with (females however do not share parts of their territories with other females). Servals are incredibly adaptable animals that are not just good at climbing trees to escape danger but unlike many cats, will happily also wade into the water to catch their prey which they do by powerfully pouncing on their victim and catching it with their front paws.

Although there is no set breeding season for Servals, more mating tends to occur in the spring when a female will seek out and court the male for a few days. After mating, female Servals establish a safe den in dense vegetation where she gives birth to between one and three kittens, that are born after a gestation period that lasts for 73 days. Young Servals are born blind and weigh just 250g but within the first two weeks, their eyes open and they double in size. Female Servals suckle their young until they are weaned at 5 months when they begin to accompany her when hunting for food but don’t tend to leave her for at least a year. Once independent, the kittens must find a territory to call their own which can take young males up to two years. Servals are thought to live for an average of 10-12 years in the wild with oldest recorded individual having reached the age of 23.

The Serval is a carnivorous animal that hunts and eats small animals in order to survive. Servals primarily hunt rats and other small rodents along with fish and frogs in the water, large insects and small birds, which they are able to catch both on the ground and by leaping into the air. Servals detect their prey either by sniffing the air or by waiting and listening silently using their large ears. Once found, they lower their bodies towards the ground and slowly move towards it which is known as stalking. Once the Serval is close enough to its victim it pounces on it, catching the animal with its front paws. The long, back legs of the Serval are incredibly powerful and allow them to leap up to four meters horizontally and more than a meter up into the air. Although they don’t normally attack livestock, in areas that are close to habitation they have been known to take poultry and rarely can also attack dogs.

Due to the relatively large size and stealthy nature of the Serval, they have no common natural predators within their native environments with Leopards and Hyenas posing the biggest threat to them (not just from attack but also over competing for both food and territories). The biggest threat to Servals throughout Africa is people that are known to kill them for their fur which is highly sought after particularly among tribes in West Africa. They are also at risk from being shot by farmers who fear for their livestock and are threatened by habitat loss in a number of areas throughout their natural range.

Although Servals eat a variety of different prey, nearly 94% of their diet is comprised of small rodents such as rats, mice and shrews which means that they play a vital role in their local eco-systems keeping rodent numbers down. The large dish-like ears of the Serval allow them to sense the vibrations of rodents that are even underground and once detected, the Serval will dig its prey out using its sharp claws. The placement and size of the spots and stripes varies from one individual to the next however, those Servals that are found in grassland habitats tend to have larger black spots than those found in more forested areas to ensure they are well-camouflaged into their surroundings. Female Servals are known to change their lifestyles in order to accommodate for the fact that they have young and have to find food more often than normal. However, before they are old enough to join her out hunting, the kittens wait restlessly for her in the den and will often try and follow their mother who must distract them before leaving to hunt.

Servals were once found throughout the African continent but are today extinct from the very south and in many parts of the north, primarily because they have been hunted for their pelts. They have also been captured and sold into the exotic pet trade and have even been cross-bred with domestic cats to produce smaller but similar looking felines. Servals tend to survive more successfully in areas away from human settlements but when this is not possible, they are known to change their habits such as hunting at night rather than at dawn and dusk to minimise disturbance. Although they are not commonly known to actually attack livestock, they are often persecuted by farmers that fear for their domestic animals which has led to population declines particularly in certain areas.

Today, the Serval is listed by the IUCN as an animal that is of Least Concern from becoming extinct in its natural environment in the near future due to the fact that they are widespread and populations in many places are stable. However, they are now extinct from certain areas and have been declared locally Critically Endangered in the north where only a handful of small populations still exist. The reintroduction of captive bred Servals has occurred in a number of regions to try to stabilise dwindling populations but the ongoing loss of their unique wetland habitats is causing concern to conservationists over the future of the Serval in Africa. Although the hunting of them is now prohibited in many African countries, pelts are still traded and in high numbers in some areas.

Are Servals herbivores, carnivores, or omnivores?

Servals are Carnivores, meaning they eat other animals.

What Kingdom do Servals belong to?

Servals belong to the Kingdom Animalia.

What class do Servals belong to?

Servals belong to the class Mammalia.

What phylum to Servals belong to?

Servals belong to the phylum Chordata.

What family do Servals belong to?

Servals belong to the family Felidae.

What order do Servals belong to?

Servals belong to the order Carnivora.

What type of covering do Servals have?

Servals are covered in Fur.

What genus do Servals belong to?

Servals belong to the genus Leptailurus.

Where do Servals live?

In what type of habitat do Servals live?

Servals live in wetlands and grasslands close to water.

What are some predators of Servals?

Predators of Servals include humans, leopards, and hyenas.

How many babies do Servals have?

The average number of babies a Serval has is 2.

What is an interesting fact about Servals?

Servals can leap more than 1 meter into the air!

What is the scientific name for the Serval?

The scientific name for the Serval is Leptailurus serval.

What is the lifespan of a Serval?

How many species of Serval are there?

There are 10 species of Serval.

What is the biggest threat to the Serval?

The biggest threats to the Serval are habitat loss and hunting.

What is another name for the Serval?

The Serval is also called the African serval.

How fast is a Serval?

A Serval can travel at speeds of up to 40 miles per hour.